Roland Emmerich loves to destroy the world.  I don't know why, but the man has a fetish for it.  Maybe he was bullied by famous American landmarks as a kid.  Many people have referred to him as the modern-day Irwin Allen, which is sort of a compliment and sort of not.  On one hand, Allen is responsible for making the 'Disaster Film' successful in the '70s with films like The Poseidon Adventure and The Towering Inferno.  On the other hand, he's also responsible for over-saturating the market with films like Beyond the Poseidon Adventure and The Swarm.  Yeah, they made a sequel to the film about the boat flipping over- why not?!?  The point of all this is to set-up for today's movie, a South Korean attempt to emulate Mr. Emmerich's style.  The disaster is there, the overly-broad characters are there & bad melodrama is there.  Don't get me wrong- there is a certain appeal to an Emmerich film...but this film did not get any of that.  At two hours, this film has probably the most uneven pacing of all time.  Put on your water wings for my review of... 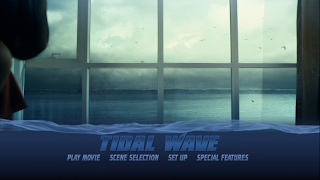 The film begins right away with a tiny boat sitting out in the middle of a tsunami.  We're ripping off The Perfect Storm from the get-go, huh?  Despite the Captain being crushed by a crab cage...somehow, the youngest member of the crew is insisting that the helicopter crew free him too.  With a wave pressing down on them, he makes his good-bye soliloquy, the helicopter leaves and an improbable mountain of water crushes the boat.  Fun fact: this movie exploits the real tsunami that struck Asia about five years ago for pathos.  Real classy, guys.  You didn't find time to work in the Challenger Explosion or 9/11 while you were at it?  The film sets up an unnecessarily large cast of characters her much like 2012, but we know that most of them are going to die.  Among the group we have some tourists, a scientist, a business woman (who's also the man's ex-wife), the older fisherman, the dead fisherman's daughter, his friends, his family and so on.  What follows is about an hour straight of melodrama (why is my dad dead?  why does my boyfriend get drunk all the time?  etc.) and really-forced comedy (the tourist fighting her rescuer, the fisherman getting drunk at a ballgame, etc).  In fact, it's painfully uneven with only a minor amount of time set aside to foreshadow the disaster.  Allow me to replicate the experience for you... 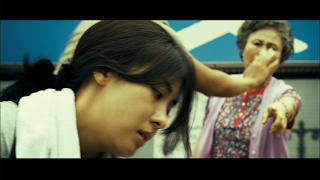 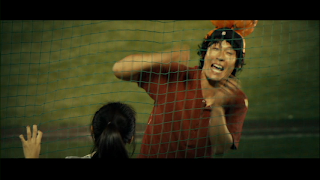 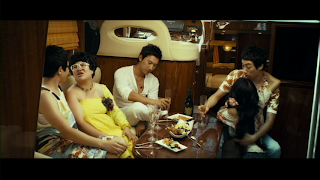 Oh right, there's supposed to be a disaster here.... 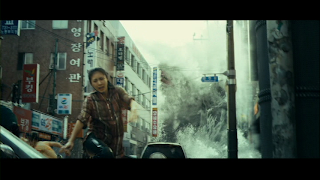 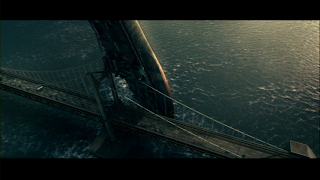 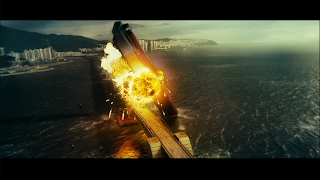 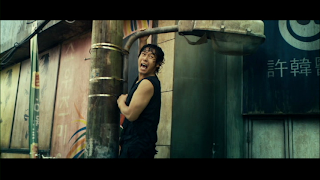 Right about 70 minutes, we get the extended disaster scene. Everyone is affected and a lot of people die. The fisherman couple are stuck in the street as bodies wash by them. At one point, they climb up to avoid a falling power line killing hundreds. Later, the man floats away, only to be saved by his uncle...who has smashed by a floating sign. The divorced couple's feud over their kid (the one she's lied about) ends when she escapes a flooded elevator and gets on the roof, only for a giant wave to somehow smash that. The tourists are stuck out on a boat during the wave & are rescued by the man from before. As he's pulling the last man up, the rope gets torn and he chooses to save the other man over himself. He dies from the next wave, which has oddly comic timing. Speaking of comic, the film's mostly-comedic character is on a washed out bridge...only to have shipping containers fall towards him from an improbably-crashed boat. After that, he drops a match and blows up the bridge...but not himself.  Eventually, the water washes away and everything settles down.  Happy ending, right?  Wrong! 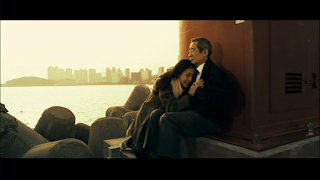 This movie is royally screwed up!  Let's look at this at face value: it's a disaster movie that's roughly 70% character set-up at the beginning and 30% disaster at the end.  Is there no way to balance that?  As much as I find Emmerich's work underwhelming at times, he at least manages a balance.  Mind you, his way is to stick melodrama into the middle of the action, which is not exactly perfect either.  Consider this: the day after I watched this, I saw Mimic 3.  The entire film was 75 minutes long- with credits.  This film spends about the same amount of time setting up to the thing that's in its title!  For fairness' sake, I should mention that Tidal Wave is the DVD release title and the film's actual title is the name of the city in which it occurs.  Even so, this movie is seriously screwed up.  I'm all for seeing foreign interpretations of American works, just as I am to seeing American interpretations of foreign works, just to a lesser extent.  Still, this is the kind of thing that can scare people away from the whole thing.  Why would someone make a disaster film that has a comedic character causing a giant explosion in it?  Why would someone make a disaster film that drags its feet so much?  I should stop and mention that the special effects are pretty darn good here, although it has the same problem with making CG water look real that a lot of films do.  I say all of that even though the film is a big-budget film from 2009- we should expect that.  I bipolar film plot involving loads of melodrama and shitty comedy- I should not expect that! 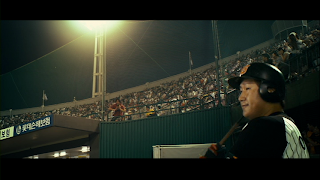 Next up, I cover a movie that holds a special place in my heart.  It's shit, but it stars an actual relative of mine- seriously!  Stay tuned...
Posted by Alec Pridgen at 9:45 AM