Two more years have gone by and we have yet another Dracula sequel.  It's at this point that I feel the need to point out how rare a Dracula film sequel getting a chronological numbering is.  Hell, it's pretty rare to see a Dracula film get a real sequel.  A lot of the Hammer stuff is 'Dracula dies at the end, but he's alive again in this movie- pretend you never saw that one.'  For all of us who have seen The Satanic Rites of Dracula, we can all agree that pretending we never saw that one is a good plan!  Anyways, this movie picks up a vague amount of time after Dracula II and follows the two Jasons (London and Lee) in Romania.  A vampire sequel set in Romania?  God dammit, I'm having Subspecies II-IV flashbacks! Before I'm overrun with images of vampires turning into shadows or teleporting via 'the Wonder Woman method,' I should also mention that we have another new Dracula actor...despite Dracula not dying last time.  Oh and he's credited as 'Dracula III.'  You can do better than this, Rutger Hauer!  To see why I say that, check out my review of... 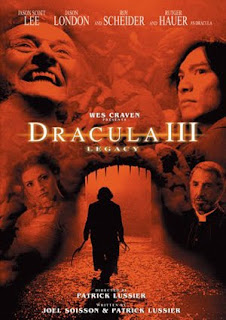 The film begins with Jason London wandering around a train yard and besieged with vampires.  Soon enough, Lee's killer priest shows up and kills them, causing his partner to question why he took so long.  Ha ha- you almost got me killed!  We are treated to a flashback where Lee's character went to speak with his head priest (still Roy Scheider, sadly) about what to do next.  Basically, he's told to give it up and just become a normal priest.  Instead, he hands over his habit to the blind man.  Remind me again why he's blind here?  Oh well, at least Roy got out of this film series- hurray!  In Romania, our heroes drive around and learn that some strife is going on.  People are being kidnapped by thugs and a resistance movement is in place.  Wow, just dive head-first into those cliches, movie!  They go out into the woods and London decides that they need to help a group of people being held hostage by raiders, something that Lee disapproves of.  They save the people and learn that the men are working for some unknown person.  Their goal: bringing people back to the nearby castle.  Yeah, that's not suspicious. 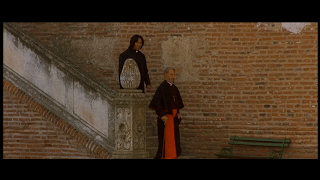 The big problem with this movie is the same thing that's great about home insulation: padding.  They set-up a simple plot: Dracula is feeding his vampire kin thanks to some people willing to trade others lives for freedom.  Okay, just kill them and go fight Dracula.  Your movie will be shorter, but at least it might be good.  Instead, they meander a bit and stop a second time when they see some cars pulled off to the side of the road.  After getting shot at, attacked and having their car blown up the last time, you would think that the Jasons would be a bit 'gun-shy' about it.  Nope, they stop and get captured by the resistance movement.  To make things better, they run into the reporter lady that they saved earlier, despite telling her to leave.  That night, Lee breaks out of their cell as the nearby vampires swarm the place.  Naturally, the resistance movement has no security in place and get killed easily.  How exactly are you 'resisting' by hiding in plain sight with no protection?  Fortunately, our vampire killer is really good at, well, killing vampires.  The bloodsuckers in this movie actually prove to be more ineffectual in this movie than in Dracula II, as most of them take the place of 'unnamed ninja' or 'suit-wearing thug' from action movies.  I would say that being the living dead makes you suck, but that would be a terrible pun.  Oops.  In the morning, Lee goes outside without his shirt on- hello, Taylor Lautner's major influence- and apparently purges the vampiric influence in him.  That's what that pointless and unexplained bit from Dracula II was about, by the way. 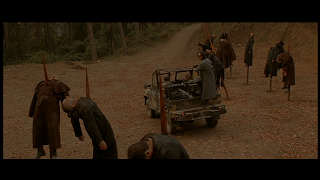 Eventually, our heroes decide that they still need to find Dracula, so they find his castle and it's surrounded by impaled people.  Obvious historical reference for the win!  Upon arrival, they are immediately captured and Lee is shot.  London simply climbs away from the approaching vampires as they go to feed while the sun is still kind-of up and gets inside the castle.  He stumbles across the Videodrome room and sees a naked lady drop from the ceiling.  No, it's not the reporter, although she is nearby.  Thanks for the nudity, extra.  Dracula is now The Hitcher for no clear reason and escorts London down to see Diane Neal's character- hey, remember her?!?  Yeah, over an hour in, she shows up, tells London that she's too far gone and shoves him.  Lee finally recovers from his gunshot wound and fall & goes in for some action.  He makes his way to Dracula pretty quick and the two of them fight.  This actually goes very evenly, but turns in Dracula's favor.  Apparently being older makes him act younger and faster- go figure.  Neal's character stabs him with a torch...somehow and Lee bites him on the neck.  Um, what does that accomplish?  Oh well, he's finally killed, since he was given absolution by Lee's priest.  Yeah, that's what kills him now.  However, the reporter is dead, London mercy-kills Neal and Lee stays behind as the new vampire lord.  Um, okay. 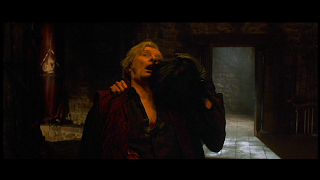 This movie is really not good at all.  The whole thing is just ridiculous at face value and made even worse in execution.  First off, Dracula doesn't show up until over an hour into your 80 minute movie- bullshit!  Second, he is a different actor, a fact notable when you show the second actor in a dream sequence!  Third, the movie continues the idea of him always changing faces, blatantly ignoring the first film.  Before you try and excuse it, know that all three films share a common co-writer and director: Patrick Lussier.  Did he lose his notes or something?  As I said in the review proper, the movie is just chock full of pointless padding.  You could have simply referenced a lot of this as happening and I would have just believed you.  I also have to mention the big emphasis given to finding Diane Neal's character, which gets a payoff in the form of a cameo only slightly longer than that of Roy Scheider!  Lee tells him that she is too far gone, which she is...until the ending where she redeems herself and then gets killed.  I wish that this had ended up well, because it had some legitimate promise.  Dracula using criminals for his gain- interesting.  A dynamic and awkward pairing of Lee and London- interesting.  Rutger Hauer as Dracula- interesting.  This movie- bullshit.  The worst part is that Hauer appeared in two big movies this same year: Batman Begins and Sin City.  You had other options, you idiot!  As sub-par as Dracula 2000 is to me, you're far better off watching that three times than finishing out this trilogy.  Ugh. 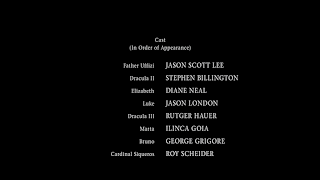 Up next, another rare and hard-to-find horror film.  This one involves a giant, latex monster threatening the Shire.  Stay tuned...
Posted by Alec Pridgen at 11:52 PM