What better way to show my love for the military than by showing a crappy film involving their depiction?  Okay, there are a lot of ways, but I'm going with this one!  In 2008, some guy decided that there was a combination that people never fully-utilized: WWII films and dinosaur films.  Naturally, this guy was insane, but managed to get funding to make his dream come true and got one of the 'stars' of Charmed to be in it.  I should note that it took four people to write this movie in two sets of two.  One of those four people is John Terlesky, the man who played the lead in Deathstalker II, as well as directing the film Judgment Day.  That is also a film with an odd mix: end of the world disaster film and blaxploitation action film.  The most notable thing about this movie is that it is set in WWII, but based on the biggest pile of bullshit imaginable.  I say this as a man who has also seen S.S. Doomtrooper.  Celebrate our troops as they play no part in my review of... 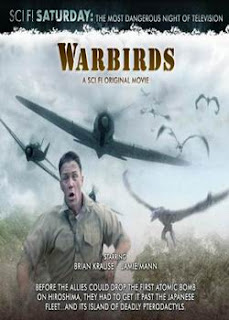 The film begins with a group of Japanese men digging entrenchments on an island in the Pacific.  This is one of the few aspects of the movie that nails the setting right, so let's enjoy it!  While doing so, they blow open a cave and are attacked by some mysterious, CG creatures.  We awkwardly cut to a group of ships flying across the ocean.  In the first part of the movie that makes me cry 'bullshit,' we are introduced to our heroines: an all-female fighter pilot group.  Really, movie?!?  You think that I'm just going to buy that, when we barely let women drive trucks in the modern military, let alone tanks or submarines?  Anyhow, they are given a new mission and a new commander played by Brian Krause.  His mission is secret, his male crew (what is this- The Brady Bunch?!?) is unknown and his cargo is more mysterious than the contents of 'the box' in Seven.  Before you ask, let me tell you that it's not Captain America.  I can't be that lucky, huh?  Their trip is interrupted by a very big storm and some mysterious things flying around.  In the chaos, a bolt from the ship's hull breaks off and kills one of the women. Wow, that was extremely-random!  They end up crashing down on an island.  Guess who else is there... 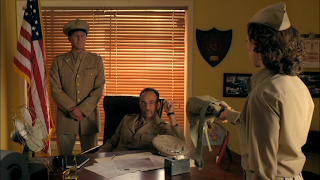 After a bit of wandering around and posturing by Krause, our heroes run into the Japanese soldiers camped out on the island.  They get into a Mexican-Japanese-American stand-off before they are interrupted by a very-obviously CG dinosaur.  Despite the DVD cover promising me a dinsoaur with a T-Rex head, these are just silly-looking pterodactyls.  You couldn't have given me anything better, huh?  At least The Asylum would have given me a T-Rex- half of their movies have them in it!  A lot of gunfire manages to scare the thing off, a fact helped by their pistols have obscenely-large muzzle flashes.  The group does not agree to work together, however, and the soldiers hold the Japanese people prisoner.  Of course, the creatures are still out there and are not going anywhere.  Fortunately for our heroes, the things take their sweet time attacking again, rather than, you know, pushing their advantage.  The attack goes just as well the second time, proving that our heroes are not exactly that competent when it comes to handling dinosaur attacks.  Dammit- were you sleeping during basic training?!?  Eventually, they realize that they have to work with the Japanese & plan an attack using their vessels, as well as their foes.'  Right before the trip, the cute and naive woman kisses one of the soldiers and pretty much signals her death with a flare!  Sure enough, her plane is destroyed in battle- cliches! 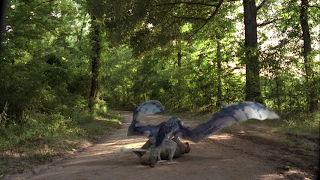 Things go from bad to worse as another attempt to take out the creatures goes badly, ending with another soldier dead.  To make things worse, our two heroes (Krause and the female captain) get separated during the attempt.  When the remaining girls regroup, they are held prisoner by the Japanese prisoners.  The woman won't put down her gun, which seems to be a dumb idea until Krause reappears and kills them.  With that over with, our heroines push the man until he tells him the truth about their cargo.  Reason to Cry Bullshit #53: the plane is carrying the A-Bomb.  No, I'm not joking.  Krause makes a big speech about how the bomb is going to kill a lot of people, but he's okay with it.  After some stalling, the two lower-ranking women go out in the remaining Japanese Zeros, while our two leads go out in the bomber.  Their plan works pretty well, although the dinosaurs apparently figure out one of their strategies and kill one of the women.  The other one seems to crash, causing our heroine to try and go back for her.  One of the dinosaurs puts his head through the cargo bay door and manages to bite Krause's arm off.  Dying, he opens the doors, drops his CG body out and blows up the island with the A-Bomb.  The other woman apparently survives as the movie reaches a happy ending. 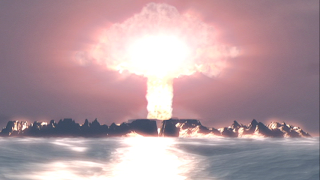 This movie is really, really bad.  The whole premise is just stupid.  I mean, a group of non-existent women fighter pilots battling dinosaurs- do I have to say anymore?  What could save this stupid movie?  How about some good acting?  Nope, it's not here.  Krause tries to bring some bravado to the role, but this is pretty transparent.  How about some good action?  Eh, not so much.  You get some silly shots of people firing guns at off-screen monsters.  The fighter pilot bits are purely CG and you never once feel any human drama in it.  It's like watching people play a flight simulator game...from 1992.  Only one thing can save this: the special effects.  Yeah, you had to know by now that this does not look like good CG.  There are some nice textures on the things in close-up shots, but the wide-angle bits are so blatantly-CG.  Hey guys, try putting shadows on the things to make them look a little more like they actually exist.  Seriously, how does a movie from 2008 and released on DVD have special effects that look like they belong in an ad for a D-grade technical school?!?  Why do we put up with this crap?  Oh yeah, because it's funny as hell.  On a side note, as bad as this movie is, it's still better than trying to re-watch War Wolves.  If you want pain, it's that movie! 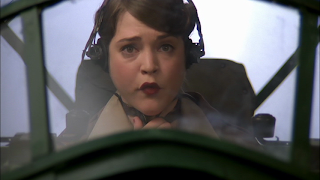 Up next, Series Month kicks off strong with the Killer Tomatoes quadrilogy.  Will the first set us up for a strong finish or stumble at the gate?  Stay tuned...
Posted by Alec Pridgen at 11:46 PM

Email ThisBlogThis!Share to TwitterShare to FacebookShare to Pinterest
Labels: holiday