This is the last Darkman film made...so far, so let's wrap this whole thing up.  Arnold Vosloo is back, but no other cast members from Darkman II are on hand here.  In fact, the only thing you get from that movie is re-used footage...but more on that later.  The movie not only ignores some key points and characters, but does a bit of ret-conning of its own.  The film introduces a new villain to the mix that has to live up the hammy portrayal of Mr. Durant from the first two films.  On the plus side, character actor Jeff Fahey is on hand for this movie, so he's up to the task!  Subtlety- not on display here.  In fact, the movie feels like a bit of parody at times, as everyone overplays their 'tough guy' act.  Is it intentional?  Maybe, but I wouldn't give them that much credit.  Enough teasing- let's wrap this up more than Darkman's head with... 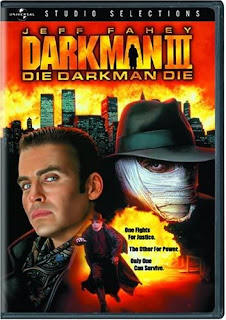 I hope you like that Darkman origin scene, because you get it again!  It's all the same, but they cut out that part about Durant.  In its place, we are shown a surgeon who apparently worked on Dr. Westlake before he officially became Darkman.  Gee, why are you showing me that?  At a gun deal led by Rooker (Jeff Fahey) is interrupted by one of the henchmen having a double.  Gee, I wonder why.  A foot chase/shoot-out occurs as our hero narrowly escapes, thanks to a car decapitating the villain as he climbs out of a manhole.  Two movies within a week with that- what are the odds?!?  Like in the last film, he takes a bunch of money to buy some equipment.  Unknown to him, however, there is a giant tracking device on the side of the box.  Our hero = blind.  Remember that part where he makes a mask, but fails to get it past the 99-minute mark?  We get it again- thanks, stock footage!  This re-used footage is interrupted by the arrival of a woman, who turns out to be the surgeon from before.  She takes him to her lab and shows him the work that she has done.  She offers to do a surgery on him to restore his sense of feeling, something he apparently lost as part of the accident.  He uses her notes in conjunction with his own to make a new mask...only to find out that the woman is not who she seems to be. 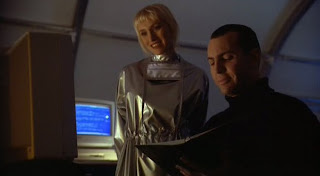 Basically, the lady is a greedy bitch.  To elaborate, she is a greedy bitch who is working for Rooker and sells out our hero.  As part of this, she re-attaches his pain center, but puts a little robot in it that allows her to zap him.  Rather than obsessing with the mask technology (that's our hero's hobby), Rooker is obsessed with the weird formula that gives him super-strength...sometimes.  Our hero awakens chained to a hook and breaks free, only to find himself being chased by numerous armed men.  After a long sequence- including an awkward bit where his stuntman tries to run across the tops of some barrels- he is captured and Rooker explains that this was done to get a proper sample of the formula.  Leaving our hero in a ditch, the men forget that he's a doctor and he removes the object, which looks goofy as shit.  He escapes and mopes about how the single floppy disk worth of his formula is now in Rooker's hands.  By the way, he has about six copies in Darkman II, so this feels a bit silly.  Since this is a Darkman movie, he goes through a plan of impersonating Rooker and his men.  In an odd twist, this takes a more morose turn as having a pretend family makes our hero sad.  Wow, you suck. 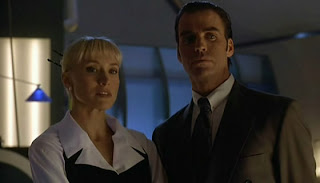 Things go from great to worse for Rooker as our hero impersonates him at a party and agrees to testify against Rooker's business associates.  He eventually approaches the wife in person and tries to explain it all to her.  This plot is a bit ridiculous as one act of playing the piano with the daughter makes Rooker's wife all happy again.  Ten plus years of neglect and cheating is made up for in one act of playing Chopsticks!  The real Rooker has an equally-silly plan: killing a Senator and getting himself elected.  A rich, corrupt guy trying to get elected- that couldn't happen two times in the same year in Florida!  What makes this silly is that his plan involves dosing his crappy henchmen with 'super-steroids.'  In theory, that's great.  Maybe you could do that in England where cops only have billy clubs and tea cups, but our cops have shotguns!  This all builds up to a showdown at the incumbent's rally which...is stopped easily by Darkman.  The final battle involves Darkman fighting Rooker in a warehouse...with Rooker's own wife and kids as hostages.  Um, what?!?  Rooker dies, but the girl is lightly-burned, 'making' Darkman give up his only sample of good formula & dooming him to a life of scarred existence.  The End. 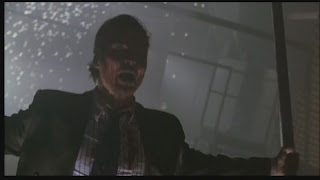 This is definitely not a good movie.  I suppose that goes without saying, but I feel like it bears repeating.  This movie is called Darkman III: Die Darkman Die, for God's sake!  Unlike the last film, the pulpy elements are pushed back in favor of drama.  Say what you will about how bad the second film is, the pulp action is sort of fun.  This movie is ridiculous, full of itself and lacking in any good ideas.  What kind of twists do they throw in here?  The bad guy betraying his own scheming mistress- seen it.  A dark hero mourning the life he could have had- ask Batman about that!  In addition, I should mention one quirky thing about this film and the last one- Arnold Vosloo has last billing as Darkman.  On the surface, this looks stupid as hell, but think about it.  For most of the film- especially this one- Darkman is in disguise or wrapped up in gauze.  Darkman in gauze = stuntman.  The problem with this movie is that our hero plays second fiddle to just about everything else.  The movie with 'Darkman' in the title twice has the least amount of Darkman- go figure!  Seriously, there are much better action films than this one.  Although, this one is currently streaming on Netflix.  For free-on-demand, it's only sub-par. 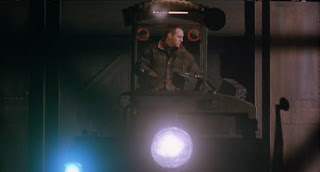 Next up, another Japanese film about a tiny woman fighting zombies- sure, why not?  As a bonus, it features a cameo by the Troma logo.  Stay tuned...
Posted by Alec Pridgen at 11:43 PM