This movie was hard to find anywhere, so hopefully it was worth the time.  This film was made in 1986 by George Pavlou, a man with very few Film credits to his name.  Around this time, he was immersed in a creative relationship with Clive Barker, just before he got famous with the Hellraiser films.  They worked on a pair of films together between 1985 and 1987- Underworld (aka Transmutations) and this film.  After this, he would go on to make children's programming. That was surely a very awkward transition.  Let's focus on this though.  The curious thing is that this is an adaptation of a short story, as opposed to a book.  Does it make for some awkward padding and filler?  Find out in my big-eyed review of... 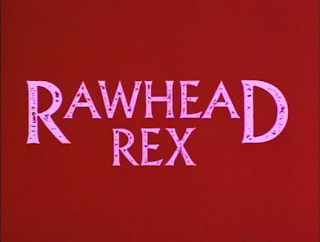 As the opening credits roll, we are treated to lots of long, aerial shots of the English countryside.  If there is still any confusion about where this movie takes place, the accents will take care of that!  A man is checking out a local graveyard while his son is simply bored.  He goes into the church and tries to find out some information about the place, but the local priest is not exactly forthcoming.  The guy directs him to the church's library and leaves.  Enough of that shit, let's focus on the guy who has decided to uproot a giant pillar.  Lots of silly light effects shoot out and a creature arises from the hole.  I hope you don't like mystery, because this movie shows you the creature in full-frame within 8 minutes of hitting Start.  Our titular creature is, um, very odd-looking.  Imagine if the Troll from 'The True Bride' story ate a giant box of steroids and you get the idea.  Some weird happenings occur in the area as a red light shoots out from a very odd glass panel in the church and heats up the wood.  Um, okay.  At a nearby home, the monster shows up, kills the husband and chases the wife around.  When she's cornered, it stops, rubs her pregnant belly & leaves.  When the police show up, she has a minor freak out.  Want to explain this, movie? 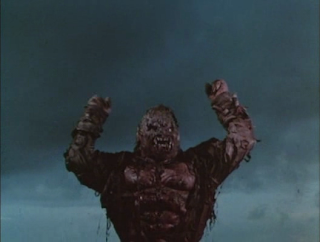 Continuing on its path of not explaining some things and really explaining others, our lead looks into the church and its mysteries.  His search for knowledge is thrown onto a sideways path when he stops near a field to let his daughter use the loo.  The son stays behind to read his 'Secret Wars' comic- seriously, it has a cameo- but is greeted by the titular monster.  Somehow our hero and his wife fail to hear the thing smashing in the car window and only spot it when it's carrying the kid away.  The man runs full speed over to stop it, but the thing is gone.  Um, does that thing have a jet pack or something?!?  When he tells the police his story, they fail to believe him- gee, I wonder why?!?  Of course, they will learn to regret this behavior as time goes by.  Trying his best to ignore his grief, the man throws himself into his research & tries to decipher the mystery about the glass panes.  According to the priest, they were broken during many of the wars that have affected the area and pieced together as best they could.  Gee, I'm sure that this won't play a part in the finale.  Over at an RV park (what is this, Alabama?!?), the monster knocks over a crowded vehicle and wreaks havoc.  The tenants fight back, but get their asses kicked.  One woman is even pulled out and her top rips open in the process.  Convenient! 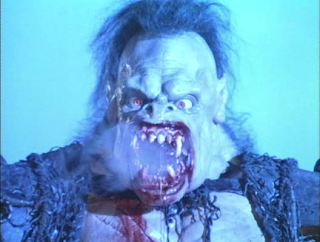 This is all building up to a big finale, so why should I make you wait?  We get some more investigating, but you don't care about that, do you?  Rex wreaks some more havoc and manages to turn the priest into a convert.  How?  I'm not entirely sure, but what's new for a Clive Barker story?  The police finally figure out that there is a giant monster killing people when it walks up and tries to rip the door off of a cop car.  That might be a hint, guys!  They set up a blockade of armed cops, which is kind of silly since the movie established earlier that the thing was bullet-proof.  Inside the church, a good priest tries to shoo the creature away using a cross, but gets killed.  Apparently the creature also possessed another man, who proceeds to drop a match into the pool of gasoline that has formed around the cops.  This causes them to be lit on fire and try to reenact that Led Zeppelin album cover.  You guys are seriously crappy!  Our hero finally figures that the key is to use this magical stone, which he grabs, but is chased by Rex.  Out in the graveyard, he attempts to use it, but to no avail.  Fortunately, his wife is there to pick it up and causes light to shoot out of the womb-shaped crevice on the object.  That might have been a hint, guys!  After a big show, the creature is sent back to its home.  After a funeral, however, a similarly-shaped head pops out of the ground for one last jump scare! 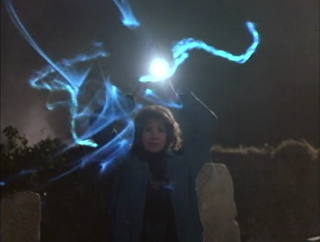 This movie is...weird.  I'm not sure what else I can really say about it.  It's a weird, British movie based on a Clive Barker short story.  It has a weird, pagan creature showing up and killing people with low-class British accents.  It all ends in a magical light show from a stone.  It's super-trippy and full of death.  Man, Clive Barker is one weird guy!  Seriously though, this movie is all about the creature going around and killing people for no clear reason.  Did they offend his religion?  Did they take his land?  As far as I could tell, the movie never really said.  In fact, all I could really gather out Rex is that he does not like to kill pregnant woman.  Oh and it doesn't like you trying to hit him, even if it doesn't actually hurt him in any way.  For the most part, the thing is well-produced and flows pretty well.  There is one awkward bit in the finale where they show the stage lighting.  Well, it's either that or a star is burning out in the background!  The biggest appeal of this movie is its rarity.  The film rights are apparently owned by Lion's Gate, but the last DVD of it was produced in 1999!  You want to stop re-releasing Evil Dead in differently-numbered DVD sets and just produce this one again?  Seriously, I can find Un Chien Andalou on DVD, but not this one!  Get to it! 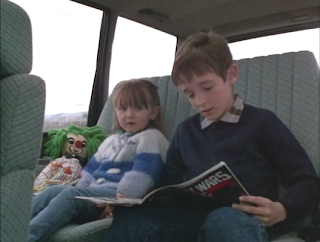 Next up, Blockbuster Trash brings you the sequel to a film that didn't even set up one: The Cell.  Is Frank Whaley a substitute for Vincent D'onofrio and Vince Vaughn?  Stay tuned...
Posted by Alec Pridgen at 11:18 PM