After all this time, can I still be surprised by a shitty film from The Asylum?  You'd think not, but you'd be wrong.  Let's jump in the Slightly-Way-Back Machine for a trip to 2006.  Ah, the good old days of bigger cell phones, 3G Wireless Networks and the Saw series still being kind of liked.  It was this year that a bad video game film came out known as Resident Evil.  It vaguely-resembled the game series and is generally considered to be pretty bad- although great by comparison to Part 2 and 3!  Obviously, The Asylum can't let a cash cow like this go un-milked, so they released today's film: Resident Demon.  Is it an adaptation of a video game?  No.  Is it about an evil genetics corporation?  No.  Does it involve zombies?  Well, not really.  If you're going to rip-off the movie's title, could you at least rip-off the movie?!?!?  Instead we get a modern version of a shot-on-shiteo (thank you, Cinema Snob) film.  I should mention that it's writer/director/editor/executive producer is also its star.  This is going to hurt, isn't it?  Well, if twelve guys can make it in their house and get a shit DVD company to release it, I guess I have to watch it.  This is... 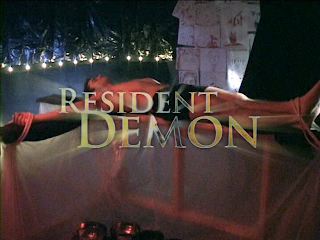 Our story begins with a young woman doing some sort of weird ceremony involving a cheap warehouse room, a man on a cot and some Satanic drawings done by a 5-year old.  She ends up killing the guy with a steak knife in the leas convincing manner possible and ends up in a tub full of pomegranate juice...I mean, blood.  With no explanation, we cut from here to a sanitarium where a bunch of wannabe-actors do their best 'crazy people' cliches, including the 'rocking back and forth' person and the 'running their hands through their hair' person.  Oh well, at least we don't have Lloyd Kaufman claiming to know karate in this movie!  This all leads to our heroine, a crazy woman who is given her breakfast by a nurse...and immediately knocks her out with the plastic tray.  Um, that wouldn't really work.  She casually escapes and stops in a stairwell where she is met by a guy with a beard.  Apparently, he is our Dr. Loomis here and sends her to a house to put a stop to 'it.'  Just to be safe, he gives her a gun.  Well, safe for her...but not safe for us.  We cut to a young couple moving into a new place and throwing a party for their friends.  The woman goes up to take a bath...five minutes before the guests arrive and ends up being possessed by the spirit of the woman from before.  Apparently, nobody has ever used this tub in three years, but it's still sanitary?  Ew. 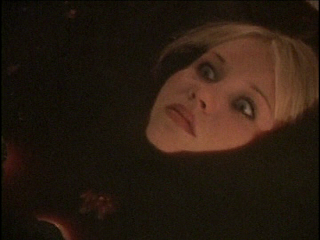 The first guests arrive & they end up being a Southern belle and a guy who appears to be trying to look like Sabretooth.  They go upstairs for 'the tour' but end up by themselves.  Before this, however, our previously-bathing heroine taps the woman on the shoulder and transfers the possession.  Is this evil or tag?!?  They proceed to make out and tease having sex, only to have the woman stab the man to death.  While this is going on, another set of heroes- a black man and a white woman- show up for the party, but get interrupted by the goings-on.  Our heroes show up and find the woman confused about what just happened.  Right around this time, the crazy girl tries to trick her way in, but fails.  You can escape an asylum, but breaking into an apartment is tricky, huh?  She gets inside and joins the party, forcing our heroes to tie up the murdering woman.  She finally attempts to explain what is going on to our heroes.  Basically, the girl from the beginning was her sister and was doing a weird, Satanic ritual to gain immortality.  The escapee was supposed to stay around and be possessed, but she ran away instead, ending up in an asylum after telling the police her story.  Wait- a woman ending up in an asylum in an Asylum film?  My brain hurts! 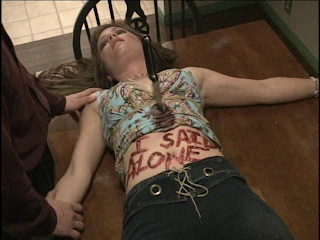 The whole thing gets weird and messy from here-on-out.  The group talks about who might be possessed, all the while the cat is actually the host.  As a side note, they accept this bullshit withing about a minute, no questions asked.  They split up, while one woman is possessed and kills the black man.  We get some decent mystery about who is possessed...only to have the hammy acting make it very clear every time.  They go to make a trade with the demonic spirit- the escapee for the innocent girl.  As it turns out, the spirit sees through their plan and turns things against them.  Even the arrival of bearded non-Loomis doesn't help turn the tide.  Some cops show up, but are killed within two minutes.  Eventually, all of the dead people from before come back as host bodies of the spirit (hence my 'not really' comment about zombies being in this).  They attack our remaining heroes- the director/writer/producer/star and the bearded guy- and run the latter through.  She begins a new ceremony that involves sacrificing the husband, but he manages to stop her by taking away the deus ex machina necklace.  She manages to stab him, but the ceremony is stopped and the demonic spirit dies...I think.  What actually happens is a bit obtuse.  Either way, they all look dead and I can take this movie out of my DVD player! 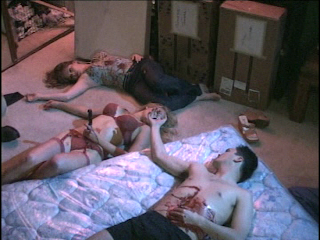 Good god, this is not a good movie!  The story is ridiculous, the acting is terrible and the production values are about as minimalist as Chuck Palahniuk!  This whole thing was clearly made for about $10,000 and shot in their actual apartment!  Oh, my bad- they also use their parking garage!  Seriously, this thing makes all of the Cinemassacre films look like Michael Bay movies (no offense, Mr. Rolfe).  What does this have to do with Resident Evil again?  Oh right- jack shit!  Besides, let's be realistic here for a moment- this is not even a demon.  It's not like Pazuzu was set free here- it's just some dumb lady who worships Satan.  This is as much about demons as the '80s film Shocker was!  Is there any good reason to see this movie?  No.  It's utter crap and has no real redeeming value.  If you really like watching shitty, low-budget horror films, you can do worse.  Mind you, it's a very short list, but there is one.  This makes me worry about what's going to happen with my 800th post!  I'm scared... 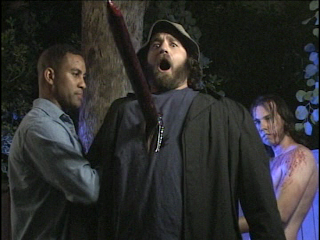 Next up, my three-part look at Wes Craven's Dracula trilogy begins.  First up, the original film that actually ended up in theaters.  Stay tuned...

Email ThisBlogThis!Share to TwitterShare to FacebookShare to Pinterest
Labels: numbered, special, The Asylum