There's no way that this was going to be good- plain and simple.  Let's look at the facts, shall we?  First off, this is a film by The Asylum.  Right there, the odds are against this film.  Second, this film is a knock-off of Death Race, which is a remake of a questionable cult classic.  Don't get me wrong- I love Deathrace 2000, but it is very, very dumb.  Third, let's look at  a comparison of the main villains: Academy Award-nominated Joan Allen vs. Raven.  Who's Raven, you probably ask?  He's a pro-wrestler that got big in ECW, but has also had brief stints (usually no more than two years) in WCW, WWF/E and TNA, not to mention numerous Indy feds over the years.  The highpoint of his career was a year-long feud with The Sandman (not the Marvel villain) in ECW...back in about 1995.  Lastly- and I mean that quite literally- there are the big attractions: the Insane Clown Posse.  Yeah, these no-talent hacks are the main stars of this picture and, naturally, do the soundtrack as well.  If you aren't too scared, check out my review of... 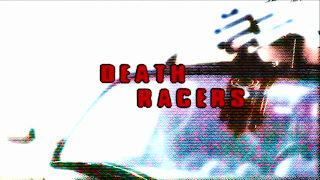 The film begins by setting up the scenario: the world has gone to shit and the government has a problem named Reaper.  Mr. Reaper (Raven) is a terrorist who wants to fight against the establishment.  His plan: blow everything to hell with Sarin gas.  Yeah, he's not the good guy.  To get him, the government establishes the Death Race.  This movie takes a couple of liberties with the property, obviously.  This race is not so much of a race and is more about points.  How do you get points?  It's simple- you kill people.  Our group of racers includes Homeland Security (a pair of jerks in fatigues), a pair of Hispanic racers, two hot lesbians and, of course, the Insane Clown Posse.  Do they play anyone but themselves?  Hell no!  The President explains that they must get 1,000 points to win their freedom & if they refuse to cooperate, he'll just activate some detonators that got inserted into their necks.  Remember the two Hispanic racers?  Well, one of them gets his head blown up in his first scene- big whoop.  The group departs and begins to run down a bunch of random guys.  It's here that we learn that this movie has almost no budget for car wrecks, so we don't get any.  Can you say 'lame,' boys and girls? 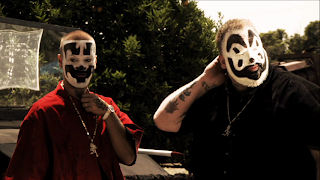 On top of not wrecking the cars, having any real explosions to speak of and the shitty acting, one more kicker is there.  About half of the time, the racers stop driving, get out of their cars and fight people.  Are you seriously giving me kung-fu fighting and stationary shooting in a film based on Deathrace 2000?!?  On top of that, it's about as bad as everything else on display here.  The movie eventually sets up a couple of interesting ideas, including a love triangle between the two lesbians and the hispanic guy (just go with it) and a snitch in Reaper's territory.  Of course, the latter is done in two scenes and the character is subsequently-killed off.  At least it gave us a few 'handy-cam' scenes showing Reaper's plans.  Speaking of Reaper, let's discuss him a bit.  His obsession is with getting a massive bomb filled with Sarin gas made.  That's pretty much it.  We cut back to him yelling at a scientist about not getting the thing strong enough and back to the story.  That's immensely-pointless, thanks.  Homeland Security gets blown up, but it's only to set-up for a really lame finale.  By the way, this movie has a cyborg in it.  I know what you're wondering- does he have a robot wang?  Well, this movie will answer your query soon enough... 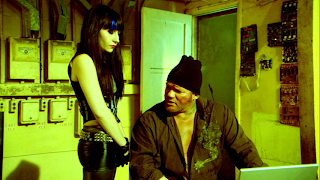 I know what you're thinking- this movie can't get any worse.  Wrong!  The group makes their way into the 'Red Zone' (thanks for the hockey pun) and near Reaper.  They kill a bunch of people, take time to splice in some nudity and more stupid crap.  In one odd scene, the Hispanic guy beats up an owner, gets captured by him and is later freed by rebels.  What did that accomplish?  Jack shit.  Speaking of pointless, how about the bit where the Posse meet up with some women, they turn out to be evil hookers and the women get killed?  Equally as pointless- thank you very much.  We get a silly battle between our heroes and the cyborg guy, which ends inconclusively.  Later on, the creature captures the blond lesbian and puts his robot member to use.  The Hispanic guy and the brunette lesbian finally stop making out, save her and chop off it's 'dongle.'  After this, the lesbians reunite, slash up the guy, but the blond one ends up being killed.  Wow, now you're alone, honey.  Don't worry- she dies abruptly in the next scene when she follows the Posse.  My brain shut down around this time, so all I can tell you is that the fat Clown fights Raven, Homeland Security turns out to be alive and everything blows up.  On the plus side, we get to see the other Clown's head blow up.  Sigh. 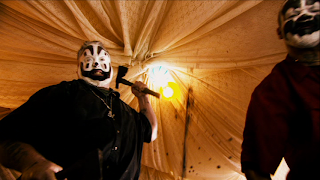 Do I need to say this?  Okay, fine- I will.  This movie is stupid!  It's The Asylum rip-off of Death Race starring the Insane Clown Posse!  Why does this exist?  Why did I make myself watch this?  Is there someone just to my left with a gun to my head?  To roughly quote Roger Ebert: "I wasn't feeling lucky the day I saw Death Racers and you know what?  By golly, by the time it was over, I was feeling kind of tired of renting movies.'  Let's give the Devil his due for a moment though.  This movie has a simple premise, promises some unique action and has film stars you don't usually see.  Of course, in reality, the premise makes no sense, the action is lame and their 'stars' suck!  Let's be honest: this movie is too cheap to have real car crashes, bullets or explosions on screen.  This crap is just stupid and hurts me.  Maybe I'm too negative here.  Oh wait, this is an Asylum rip-off of Death Race that stars the Insane Clown Posse.  Fun fact: this movie uses stock shots of the ruined city from Monster (aka Tokyo).  Repetition of stupidity?  Aargh! 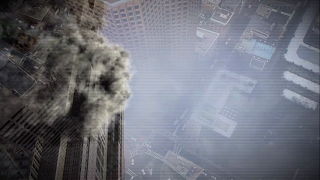 Up next, did you think that America had a stranglehold on shitty disaster movies?  Wrong.  This South Korean film proves that.  Stay tuned...
Posted by Alec Pridgen at 11:55 PM