A lot of people and companies have tried to make the definitive Dracula movie.  From Universal to Hammer to Andy Warhol, movies have failed or succeeded to various extents.  Hell, even Jesus Franco has done it- without lesbians, at that!  Today's film is an attempt to do a modern version of the story.  Will it end up like Hammer's two failed attempts (Dracula AD 1972/3 and The Satanic Rites of Dracula)?  This film has the advantage of one big horror name being attached: Wes Craven.  Of course, he's only the Executive Producer of the film (and it's sequels).  Will he be enough to counteract the inexperience of its Director, a man whose only previous work was The Prophecy 3?  Find out in my review of... 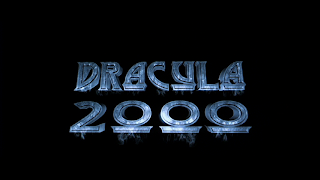 The film begins by re-enacting the famous boat scene from the book.  Kudos for bringing up a famous moment, but how can you follow it up?  The film jumps to present day where a young woman is getting a job working for a weird old man (Christopher Plummer) in a mansion.  Eventually, we learn that she is part of a group of thieves who want to get whatever treasure they think he has in his London manor.  The group including Danny Masterston and Sean Patrick Thomas) takes out the guards and uses a series of technological gadgets to enter.  Apparently they have a glove with the old man's fingerprints on it and a robot eye that beats scanners.  Good to know that this film is modern and, you know, logical.  Down in the vault, they come across a bunch of skeletons and a coffin.  Yeah, about that treasure.  During all of this, the old man appears to be doing some series heroin filtered through leeches.  Um, okay.  They try to open the thing, which causes two traps to pop out and kill two of the thieves.  No, not those...guys I don't even know the names of!  This sets off the alarms and the old man rushes into action.  Fortunately, our thieves have dynamite to escape with the crypt to their plane.  On the aircraft, Mr. Masterson cuts his finger and blood drips into thing, awakening a mysterious creature all chained up inside.  Who is it?  If you guessed that guy who played Leonidas in 300, you'd be right! 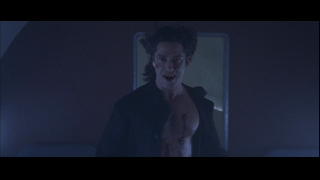 The awakening of the creature causes some trouble for our heroine- the old man's daughter.  She is being visited by weird visions of a shirtless Gerard Butler.  Ladies, you can have worse problems.  As the old man- Van Helsing- explains to his young ward, the body of Dracula was killed in the 1800s by him and locked up, since it could never truly die.  To stay alive as its protector, he began to inject himself with Dracula's blood- filtered, of course.  Yeah, that's not how it works.  The old man goes to New Orleans where the plane crashed, but the young man follows him there.  The young woman- it turns out- is Van Helsing's daughter, a fact we learn in a scene with her priest...who's played by Nathan Fillion.  In the city, Dracula kills a cameraman (Shane West) and converts a reporter (Jeri Ryan) & moves on into the city.  He's seeking the young woman for reasons that we will eventually learn.  In the city, Van Helsing and friend battle the vampiric versions of the thieves, but the lead one (Omar Epps) escapes into the night.  Dracula fails to find the girl (Mina), but settles for her roommate named Lucy.  Too subtle, movie!  Speaking of subtle, he has sex with her while floating in the air and converts her too.  He also finds time to bust out his third woman (Jennifer Esposito) and complete his bridal set. 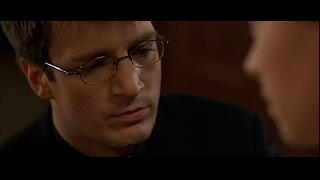 Sadly, Van Helsing is killed by Dracula in his daughter's apartment, since he's too good of an actor for this crap.  The Count also uses the force to pull his gun away...somehow.  The ward shows up and rescues our heroines...for now & they look into the lore of Dracula.  Apparently, biblical sounds and objects anger him and silver can kill him, but why?  Dracula battles them again and actually has flaming pages of the Bible thrown at him!  He gets the girl and his brides capture the ward, who promptly kills Jeri Ryan.  Um, okay.  Dracula bites Mina and explains to him his entire origin.  Dracula, it seems, was once Judas Iscariot and was doomed to walk the Earth.  Betray Jesus and get immortality- I can live with that!  The girl bites the ward, but it's actually a trick, which allows him to kill vampire Lucy.  This, of course, leads up to...a Matrix-inspired wire-fu fight between Mina and Dracula.  Um, what?!?  Eventually, they kill Ms. Esposito and finish off Dracula by hanging him.  Yes, that's what kills him permanently...until the sequel says otherwise.  We end with a shot of a now-vampiric Mina vowing to watch over Dracula's body for eternity.  Yeah, that works out well. 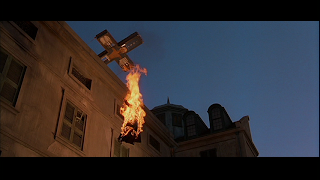 This movie is good...to a point.  If you're a purist of vampire films, you'll dislike a lot of what they did here.  On one hand, I can see why they made certain changes.  On the other hand, so much of this crap just makes no sense!  Dracula is actually Judas- why?  Was there something wrong with the old lore, Patrick?  To be fair, many reviled historical figures have been cast as The Count- Judas, included- so this is not unique.  However, it comes across as a really stupid reveal and gives us odd imagery.  You ever want to see Gerard Butler in a fake wig and beard kissing Jesus' cheek?  Now you can!  Speaking of Butler, his lines are delivered very quietly and are rare, since he clearly could not disguise his accent.  Well, I guess it's better than just dubbing him.  The rest of the acting is pretty sub-par across the board, save for Plummer.  You'll always be The Emperor of the Universe to me, Chris!  The special effects work is pretty silly, including a bit where a CG wolf version of Dracula splits into a group of bats when a stake is shot at him.  A lot of this movie is pretty dated, but it is still better than a lot of low-budget fair.  Sorry, but you'll never replace Christopher Lee or Bela Lugosi, guys. 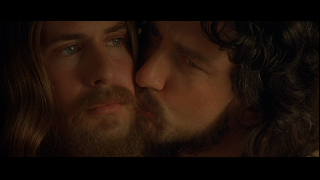 Up next, the sequel to this film arrives.  Will it feature all of the characters we know and love?  Um, no.  Stay tuned...
Posted by Alec Pridgen at 7:44 PM