After all of this time, it's time to finally bid au dieu to the Turbulence series.  What exactly did it accomplish?  Well, the first film rejuvenated Ray Liotta's career for a while and helped make Lauren Holly into a serious actress.  The second film proved that Jennifer Beals could continue to make sub-par stuff long after her brightest days were over.  What do we get out of this film?  Well, for one thing, we get Craig Sheffer proving that you can be in two films in a series, play a different part and have nobody call you on it.  Seriously, he is in Turbulence 2 and 3, but not as the same guy!  Thankfully, they killed him off in Dracula II, lest he try to show up in Dracula III as well.  The plot is ludicrous, stupid and unique.  Basically, we get a bit of drama in the sky, but with a rock & roll star, Satanists and that guy from The Hitcher.  It's an interesting mess, I'll give it that!  This is... 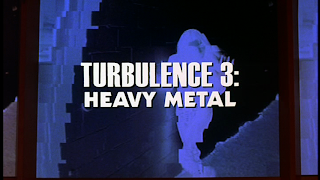 The movie spends roughly the first ten minutes setting everything up and eventually remembers to give us a title screen.  In a nutshell, a rock & roll star who's clearly not supposed to be Marilyn Manson is going to do a live concert on the plane via the internet.  Meanwhile, an FBI agent played by Burn Notice's Gabrielle Anwar catches a super-hacker (Sheffer), but he gives her some information to slow her pursuit of justice down.  He has some information about a group of Satanists that have gone off the radar and may be up to some misdeeds.  But wait, what does that have to do with the concert?  On the plane, there is a lot of build-up to the show, including one of the most tired cliches of all time.  We are *treated* to a scene where we cut from some rock music (supposedly that of the fake band) to the band sitting around with classical music.  Ha ha- it's funny because they're different!  The first song is pretty generic, but it ends with a man being tossed into an electric chair.  Wow, now we're ripping off Alice Cooper too!  The crowd eats it up, but the singer goes off-stage, forcing the people running the show to stall.  Why?  Is something amiss? 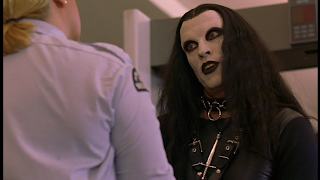 Because the live show is losing viewers, the reporter finally coerces the singer to come back.  Instead of singing, however, he waves a gun around in the fan's faces.  Naturally, they have no problem with that and actually enjoy it.  What can I say?  Metal fans are weird.  The co-pilot goes shows up and gets shot...but it's a blank.  Afterward, he threatens more fans and shoots the pilot again, but it's real this time!  Psych, Mr. Co-Pilot!  He proceeds to hold the plane hostage, a situation not helped by the sudden presence of a storm in the area.  Anwar and Scheffer see some footage of a man being shot in the back, which causes them to call in the cavalry.  Naturally, this consists of some random extras in the control tower and Joe Mantegna.  How well does that work out?  Well, one control tower gets blown up, so you tell me.  Thankfully, Joe is still around to be bland and disinterested in even being on screen- hurray!  Back at the hacker's place, they learn a big secret: the rocker with the gun is not the real deal.  The band finds this out when they turn on him and pull off his wig, revealing him to be some Satanist guy.  In a twist right out of Turbulence II, however, the lady reporter reveals herself to be evil and retakes control.  How redundant and stupid! 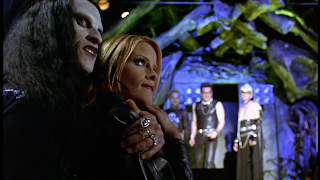 So why does someone want to hijack a plane full of rock stars and groupies?  As it turns out, they have a really stupid plan that they need it for.  After deciphering clues left on the Satanist's web page, Anwar and Scheffer learn that they are going to fly it to Kansas and crash it into some abandoned church that is apparently an evil place.  How evil is it?  Well, apparently, the Pope refused to even fly over it...for some reason.  The real rocker breaks out and manages to turn himself into our hero.  He defeats his impersonator in mere seconds and faces off with the reporter/Satanist.  While he tries not to kill her, she ends up being shot and killed.  Finally, he has a face-off with the Captain (Rutger Hauer) who is also a Satanist.  Apparently this airline has a shitty screening process!  Again, the man inadvertently kills the Captain, something done to make him likable, I guess.  In a scene right out of Turbulence and, well, Airplane 1-2, he is given instructions on how to fly the plane from a controller.  No, that makes too much sense.  He's actually given it by Scheffer's character!  His rescue plan is interrupted by the return of the impersonator for one last showdown.  This one is actually back-and-forth, but ends with the Satanist being knocked out again.  To make a long story short, the guy manages to land the plane, but only after the movie teases us with a bleak ending.  Screw you for that, movie- that's cheap. 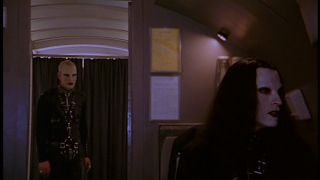 This is not much better than Turbulence II, which I guess should be no surprise.  The movie has a more interesting premise than that film, although that one did manage to throw in 800 plot twists in to spice it up.  This film sets up a ludicrous plot, but serves it up in really banal fashion.  I mean, the Satanists look like normal people and just either shoot people or fight them.  I guess I was expecting something more interesting from a film called Turbulence III: Heavy Metal!  The acting is pretty mediocre across the board, save for a decent performance by Hauer.  That brings up the bigger point: why would you hire him for this role?  You want to make your movie interesting?  Hire Rutger Hauer as a crazy Satanist waving a gun around, as opposed to making him an evil airline pilot.  This movie wreaks of direct-to-video crap- it's lazy, dumb and fails to live up to its potential.  Seriously, this is a movie about evil Satanists taking over a plane full of rock stars- this should at least be funny! 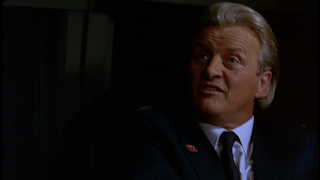 Up next, The Howling series goes off in a new direction...and continent.  Does it work or will I bark foul?  Stay tuned...
Posted by Alec Pridgen at 11:36 PM