Wes Craven is a major name in the horror market, but does that make everything he does good?  The short answer: no.  Mind you, I've only covered some of his more obtuse films on this site, such as Deadly Friend and Music of the Heart.  Speaking of movies that people don't always want to associate with Wes Craven, here is the cash-in sequel to his cult classic film The Hills Have Eyes.  Made in 1985, there is a noticeable time gap between the two films.  What are you, the Rush Hour series?  So what has changed between the two films' time periods, you ask?  Well, Jupiter is still dead, but Pluto has somehow survived getting his throat torn out by a dog.  That radiation has some good side effects, huh?  A new killer is in town and running the clan...of one other guy.  You guys really need to start recruiting!  As far as normal people being carried over, you get two, but one of them is a part smaller than The Sinful Dwarf.  The biggest thing to note: this movie loves flashbacks.  It's a blatant bit of time filler and leads to one of the dumbest moments in the history of screenwriting.  Curious?  Check out my review of... 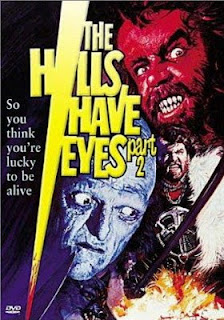 The film begins with Billy- the older boy from the original film- having a therapy session to deal with his lingering fears.  Wow, real psychological ramifications in a horror series- this is looking up.  As soon as I think that, he has a flashback, showing us the entire scene where they kill Jupiter.  It's easy to spot this as stock footage even if you haven't seen the original- guilty.  Why?  Because that film has more grain on it than in a damn silo!  I'm sure that there is some restored and/or Blu-Ray version of this, but I'm watching this Streaming, so I get the shit version.  After this, his psychiatrist encourages to him not avoid the desert and to go out with his friends for a bike race.  The man, you see, has invented some sort of super-fuel for bikes and they want to show it off at the race.  Their goal: to find a buyer for it, get rich and retire.  You guys are like 25!  Anyhow, we are treated to a weird scene where a man in a ghoul mask seemingly breaking into a house.  As it turns out, it's his girlfriend's house and she's blind.  That was, um, random.  They meet up with their other friends, including a black couple and an idiot who crashes his bike into a convenient pile of boxes for his introduction.  You're going to be our serious character, aren't you? 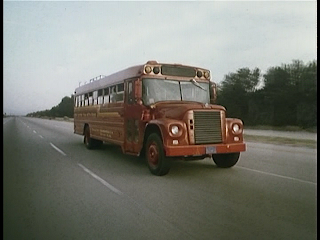 Before the group goes out, Billy decides that he just can't go.  Thanks for your needless cameo, buddy!  The rest of the group goes out in their big, red bus & stops to pick Beast, the dog from the original.  That's an awfully-vibrant dog for being over ten years old!  On the bus ride there, the idiot guy who crashed earlier, is driving the bus and telling a wild tale of...The Hills Have Eyes.  Yeah, apparently everyone knows the tale.  Did Billy write a book about it or something?  How does everyone know about this event that only a few people survived?  Answer me, Wes!  The story causes a woman named Rachel to have a flashback to Ruby saving the baby from Jupiter and Pluto.  Gee, I wonder how she remembers that?  Unfortunately, our group runs into a problem caused by one Ben Franklin.  That's right- they're running late due to them not adjusting their clocks for Daylight Saving's Time!  You've got to be freaking kidding me, movie!!!  All of this is a set-up to them deciding to go off the paved road and take a shortcut.  They're in such a hurry that they stop the bus to discuss what they have to do.  To make a long story short, they all take the dirt road, have another flashback and end up puncturing their gas tank.  They have just enough gas to get to a tiny shed.  To quote a Mr. Ackbar: 'It's a trap!!!' 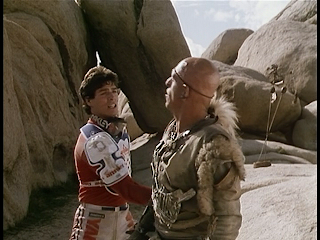 The movie tries to cram a lot into it's second and third act, so I'll be brisk.  After wandering around for a long time, Rachel/Ruby gets attacked by Pluto (Micheal Berryman), who promptly gets his ass-kicked by her, but manages to hit her and run away.  Later, he steals the bike of our heroes (or, his stunt double does) and we get a bit of time filler in the form of a race.  While they're gone, we get the movie's dumbest moment: Beast has a flashback!  No, really.  Our heroes get split up and the lead guy captures Pluto, but his friend gets killed by a trap.  We learn that the new boss in the area is The Reaper & he allows Pluto to escape, which leads to our hero being captured...and not killed.  The others linger around for a bit, the black couple of have sex and the movie finally starts killing off people- and fast!  In a series of scenes, everyone save for the blind girl, our hero, Rachel and Beast.  A double-team effort from our hero and Beast leads to Pluto's death, while Reaper stalks the blind girl.  Using her movie-based 'blind girl senses,' she eludes death rather easily.  Yeah, you're a killing machine.  In a bit of laziness, Rachel/Ruby and Beast just sort of disappear from the film- um, okay.  Our two heroes set-up a Goldbergian trap to kill Reaper, which involves a rock, fire and an exploding bus.  They are alive, but have no way home.  The End. 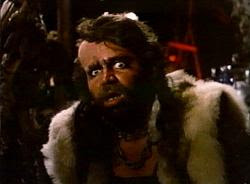 This movie is really not good.  For one thing, it is obsessed with showing you the interesting parts of The Hills Have Eyes, which makes you realize how much shit this film is.  They also edit the footage to cut around the bit where Pluto gets killed- lame.  The actual story is dumb and only relies on our heroes being dumber than a bag of rocks!  They drive over rocks in a bus, don't know that buses can use diesel fuel and decide to wander around instead of getting somewhere.  They got into this mess by being in a hurry, but now they have time to meander.  Pluto is pretty good in his role, although he is made to look like a complete moron.  The evil, killing machine manages to get beaten up by a girl, captured by a jerk, bitten by a dog and killed in a stupid way.  You want to know how to kill a scary character?  Check out this movie for the answer.  The Reaper is alright in his scenes, although he is mostly just a mindless brute.  The kills themselves lack a lot of logic, including the bit where the giant guy hides under a bus & where he sets up a trap, while he's apparently not even in the building!  This movie is a giant waste of time and actually makes me yearn for the recent remakes.  Say what you will, but the first one nails the gritty atmosphere much better than this shit!  To quote Carl ILHM, it's 'a best left forgotten sequel.' 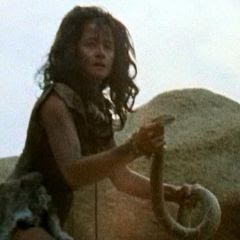 Up next, I close up the Mimic trilogy- sort of- with a film that blatantly rips off a Hitchcock classic.  Don't worry- it still has giant bugs too.  Stay tuned...
Posted by Alec Pridgen at 12:29 PM