This one's been long overdue, so let's not waste any more time here.

In 1987, Ralph Bakshi produced this modern (at the time) update of the classic Mighty Mouse cartoon.  It's...well, extremely weird.  This is due in part to the creative input of John Kricfalusi, known to most of you as 'that guy that made Ren & Stimpy.  Yeah, he worked on a mainstream kid's show.

The show is notable for including certain things and dramatically-excising others.  For example, Mighty Mouse is not operatic when he talks, but he is when he does his famous line- 'Here I come to save the day...'  I gues this was done to make it seem all the more strange- it does.

The show included a whole cast of bizarre characters...

* Bat-Bat was a Bat superhero who dressed up in a Batman garb.  His sidekick was a fly.  Why not?
* Petey Pate was a cat who became a villain because people made fun of his bald spot.  Okay...
* The Cow is an evil bovine who strikes back at the dairy industry.  That...makes sense.

The show was actually a pretty big hit, but ran into controversy.  You see, there's a part in one episode where Mighty Mouse inhales some bits of a crushed flower.  This was interpreted as M.M. snorting cocaine!  The fact that Bakshi was considered by many to be a 'pornographer' due to Fritz the Cat did not help.  Here's the 'incriminating frame...' 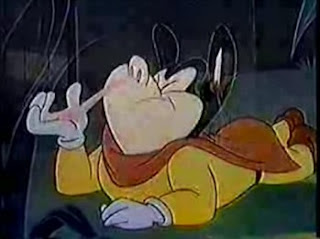 I don't really see it, but whatever.  Parental Groups had too much free time in the '80s, as shown by the Silent Night, Deadly Night debacle and the whole issue of censorship in music.

The show's legacy has outlived it's two-season run on television by being the early springboard for people like Kricfalusi, as well as Bruce Timm (Batman: The Animated Series), Rich Moore (Futurama), Jim Reardon (Tiny Toon Adventures), Tom Minton (Animaniacs) and others.  It's loose, parodic formula was an example of what would come with such shows as Tiny Toon Adventures, Animaniacs and Freakazoid.  The show is often credited alongside Who Framed Roger Rabbit? as bringing in a movement of openly-silly cartoons as well.  The show is bizarre, self-referrential and kooky.  If you're a fan of Kricfalusi, it's a good example to see what was to come.

Next up, a Kids WB show that was hated by its audience and it's writers.  How did a show featuring three cartoon icons of their day get so much hate?  Stay tuned...
Posted by Alec Pridgen at 4:20 PM