What happened to original ideas?  Back in 1993, a film was made called Leprechaun.  It wasn't good.  However, it did inspire a total of 5 sequels and...one rip-off.  In 1996, this little gem came out- Rumpelstiltskin.  It's another tale about an ancient, tiny terror running amok in the modern day.  The film is derivative to the point of lawsuit territory.  Why didn't you get on that Writer/Director Mark Jones?  Oh, it's because you directed this movie too!  Yes, this guy managed to rip-off himself.  Let's take a look at the Producers- Joe Ruby and Ken Spears.  This film is Produced by the creators of Scooby-Doo?  My brain hurts.  Let's jump right in before I find out that this is yet another Instant Viewing film featuring a cast member from Deep Space Nine.  Oops, too late.  Get your straw-spinning kit out as we make a date with... 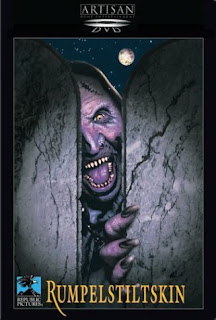 We begin in the 15th Century as a mob chases down the titular monster.  We're beginning in the Middle Ages.  I could have sworn that I saw this in Leprechaun 2- which Mark didn't make!  You just ripped off the movie that was a sequel to your own film?!?  The group chases Rumpelstiltskin to the river whereupon he decides to whoops some ass.  You could lift a 300-lb Monk with one hand, so why did you run all this time?!?  He makes a big show of them not giving him the child like they promised until a woman casts a spell on him that sets him on fire...turning him into a stone.  Yeah, I don't get it either.  In the present day, we meet two cops in L.A. who talk and listen to rap.  Yes, this film was totally not made in 1995 and extremely-dated because of it!  The cops stop at a convenience store while one of them calls his wife on his giant cell phone.  He witnesses an attempted car-jacking (in broad daylight) and goes to stop it, causing the movie to go into slow-motion.  Dramatic effect or scene-stretching- you decide!  The guy spots a baby in the car and freezes up for some reason, causing him to be shot to death.  At no point does his partner help him, by the way.  I guess shootings in L.A. are something you can just ignore!  This is the last time we see the partner too.  We time-jump to several months later with the woman raising her kid alone, save for her annoying best friend.  Given her love for driving a one-joke-characterization into the ground, I'm guessing this is the Ruby-Spears influence.  Her friend takes her to a mysterious antique shop- hello, Gremlins- where she buys the stone with Rumpelstiltskin inside.  Ruh roh, rady.

She makes a wish and cries on the stone, which apparently wakes up the creature.  At no point do they set this up, mind you, but whatever.  He arrives in the form of her dead husband and has sex with her.  Eww.  She walks to the shower- hello, obvious body-double- and is greeted by the sight of the monster.  It wants her baby in return for the wish, but she's understandably freaked out.  She threatens him with a knife and other instruments, but he apparently can't die without a soul.  That's kind of the opposite rule of vampires, but whatever.  After seeing it punch through a door, she locks it behind another one and flees.  It's slowed down enough that it has to jump through her window to get her.  I believe that's the Strong Bad Rule, but I could be wrong.  He manages to land on her hood and fight her for a bit before she runs him over and leaves. 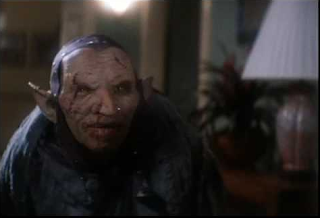 The cop friends of her don't doubt her story, but put their own theories behind it.  I love the guy who suggests that it was a crazed kid on PCP.  Our heroine hangs out with her mother and her friend, who continues to spout the same joke in a different form.  You're not funny- stop it.  After the mother leaves, Rumpelstiltskin shows up.  Our heroine makes a break for it as her friend gets her neck snapped Steven Seagal-style.  Okay, there's nothing you can do that will upset me now, movie!  With our heroine driving away, the monster stops a biker and kills him.  He proceeds to...drive the motorcycle down the road...  Yeah, there's no point in watching any more! 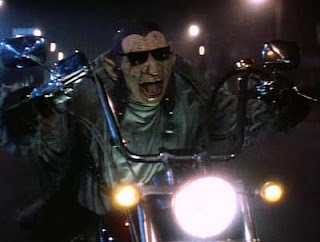 Spin your own damn straw!  The plot of this movie is goofy and really makes no sense.  Besides blatantly-stealing the idea from Leprechaun and the intro from Leprechaun 2, the movie has no good merits.  The characters are one-dimensional and generic.  Seriously, the best friend is played by a comedienne who can actually be funny.  Mind you, the best actor of all time can still suck if he's playing a character in, say, Meatballs 4!  This movie could have really used Warwick Davis too.  On top of just stealing the idea and characters, the movie fails to do some of the things that the original did right.  The Leprechaun make-up was made up of multiple parts, allowing for articulation and expression.  The Rumpelstiltskin mask is just that- a mask.  It barely moves, even when he's talking!  It's just a small step above the mask from The Brainiac.  As a whole, the part of the movie I could actually manage to watch was just not that good.  A lot of it wasn't terrible- save for the comedy attempts- but it did nothing to distinguish itself.  Say what you will about crap like Leprechaun 4: In Space, but you don't forget a movie like that.  This one is barely worth remembering. 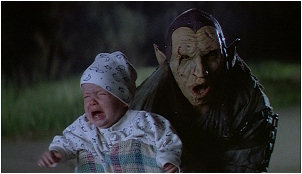 Next up, I tackle one of the more infamous sequels in recent memory.  Let's go back to camp...again for some retreading.  Stay tuned...