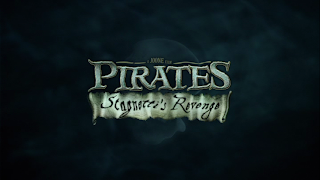 Our lovely story begins with a group of pirates attacking a ship.  Wow, I never would have called that!  The villains- led by an Asian hottie- kill most of the men on board before stealing a big, CG orb.  Great- now you've gotten Saruman's attention!  Cut to our crew of pirate hunters riding back to the mainland after defeating the evil Stagnetti.  Yes, by all means make your sequel set right after the last one, despite making it three years later.  Our hero (Stone) is a pompous jerk who likes to pose and tell his life's story to his British-Guy-cliche of a second-in-command.  In a joke that gets pounded (no pun intended) into the ground, he brags about his victory, despite his Asian cannon-worker firing the finishing shots.  He makes a point about he should get credit as the Captain...which actually makes sense.  I know that it's played for laughs (supposedly), but he does have a point!  One of Stagnetti's crew turned on him to join the crew, but she's still got a pirate history.  At the mainland, they talk to the Mayor (after his edited-out sex scene) and he...hits on both Stone and his lady partner.  Um, okay.  He sends them off on a mission to find the pirates from the introduction before making clear that they won't pardon the woman.  Him and his lady have to go undercover though, which will make many hijinks ensue...allegedly. 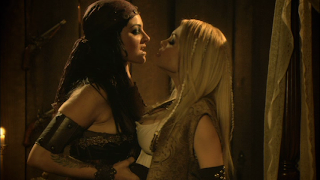 After a pointless sex scene between our heroine and a brunette...which isn't shown (see above), the blond gets captured and put under a spell...of some sort.  Our hero, meanwhile, runs across a slave trade going on and buys a French wench.  After some lead-in, that sex scene actually occurs in my R-Rated cut.  Wow, that was actually unexpected at this point!  The after-glow is ruined by the arrival of his entranced second-in-command and gets captured.  He is sent to fight in a gladiatorial arena against a guy...only to learn that the real villain is an obviously-CG worm creature.  Thankfully, the bi-curious brunette from earlier leaps out, turns into a Playstation 2 character and the kills the beast, somehow turning back to normal when she hits the ground.  They escape to track down the woman pirate.  Meanwhile, the evil pirates go out to the site of the last film's finale and drop the orb into the water, somehow exposing an underwater city and Stagnetti's body.  Stealing a bit from The Mummy, he sucks out a lackey's life force and returns to life.  Gee, it's only been an hour!  Why is your name in the title again? 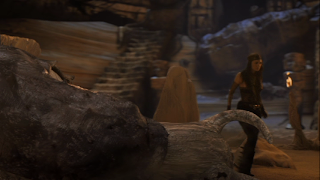 As the movie enters the third and final act, it...is about the same.  We get more stupid jokes, more silly action and more edited-out sex scenes.  Stagnetti and his lady use our heroine for a threesome...for some reason as they head towards land.  On land, a secondary character from Pirates marries the cannon-operator's sister and arrives to help out.  After the pair take out a ship full of skeletons, Stagnetti uses his magic, deus ex machina staff to summon a giant water...um, larvae.  They take that out as well, leading to a fight between our brunette heroine and the entranced blond.  This lasts all of fifteen seconds before they are stuck under a beam and Stagnetti arrives to gloat.  Stone shows up to save the day with his sword.  His actual sword, you perverts!  The villain is vanquished and our blond heroine finds time for a threesome with the secondary character and his Asian bride (also not shown).  Without even a wipe, we get to our ending scene, which sets up Pirates 3: Stagnetti Is Back...For Real This Time!  No, really. 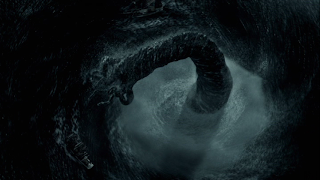 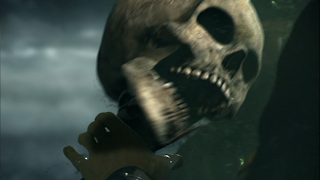 Up next, the Living Dead theme comes back with a weird '80s movie.  Can little kids with lasers stop a zombie outbreak?  Stay tuned...