The Direct-To-Video market is by a no means a new thing and it's resurgence today is a sign of how history repeats itself.  In the 1990s, the market was huge and people could make any bad movie they wanted.  The odds were in favor of them at least recouping their investment due to a strong audience of viewers.  As such, Sam Raimi and company thought to make some more money off of their superhero film that failed to match the success of the Batman series.  They made two Direct-to-Video sequels to the film, although there is not as much carry-over as you would think.  The role of Darkman was recast as Arnold Vosloo, who had just come off of playing the henchmen in Hard Target, a film co-produced by Raimi.  There's also a bit of foreshadowing in casting for this film, but I'll get to that later.  This is... 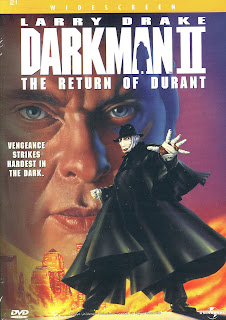 The film begins with a re-shot version (to omit Liam Neeson) of the Darkman background information.  For those who don't follow failed 1990's super-hero movie films, our hero was Dr. Westlake, a man who made Mr. Durant mad.  In turn, the guy made a giant explosion that disfigured our hero, but also gave him super-strength.  Please don't make me explain that part.  Anyhow, our hero can make synthetic skin to take someone's face...but only for 99 minutes at a time.  He became Darkman and got revenge on him by impersonating him using the skin.  In the end, he locked Durant's helicopter to a moving train and it crashed into a tunnel.  Mind you, this all happened in the first Darkman, a movie you probably should check out.  In this second film, a pair of gang rivals have a car chase/shoot-out.  One of them steals a briefcase full of money (ah, the days before electronic banking), but runs into Darkman.  He shoots at him, but our hero blocks the bullets with a sewer grate.  Um, you know that those have holes in them, right?  Our hero knocks out the man, steals the money and goes to his lair.  Hurray? 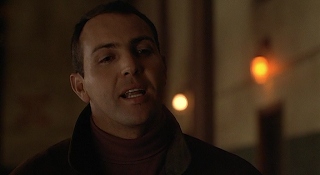 In a bit of footage you'll also see in Part III, he prepares a mask, but it doesn't beat the 99-minute mark.  I'm glad you put that at the beginning, so I can be completely un-invested in this!  Reading a magazine about bio-chemistry (they exist?!?), he discovers a man doing similar work to him.  Around the same time, Durant has returned- spoiler alert, title!- and merely has a few scars.  He also takes some pills, but what they do is never explained.  He wants to get his company back into the arms race and decides to do so by creating some new guns.  To do this, they need a factory building, which turns out to be owned by the same guy who Darkman is seeking.  The goons start to threaten the owner, but the arrival of Westlake sends them away.  Of course, they don't recognize him or mention this fact to Durant.  'Say, that guy who nearly killed you before was there- do you care?'  The pair of scientists- Westlake and the owner- work on a new kind of skin & get some good results.  While our hero is away, Durant plans to muscle his way in.  Before that, he learns that one of his men was making a back-door deal with other gun dealers.  They kill him by strapping him into a golf cart and dumping it off of the roof.  Too subtle, Durant!

Via a listening device planted in the room, our hero learns when Durant and company show up.  He pumps his train car up to full speed to save the day- he fails.  He switches place with one of Durant's men and learns about his plan.  While he's there, they drag in the warehouse owner's sister...played by Gabrielle from Xena!  He ushers her out of the building, but she gets captured when she confuses Darkman with the real henchman.  Yeah, your plan had a giant hole in it!  While this is happening, Durant's scientist has created some sort of laser weapon that either blows objects up immediately or does it with a delay.  Ah, movie science.  Our hero's final plan involves switching places with a different henchman, making poisonous pills and giving them to Durant.  At the big arms deal, he tries it, only to get captured.  You're our hero WHY exactly?  Durant decides to do a show of the weapon's power on Darkman and the girl, but his talk of cutting off fingers- his trademark- causes our hero to have a super-hero freak out!  In an improbable battle, he switches places with other henchman twice- how many masks did he bring with him again?!?- and faces off with the villain.  The battle is back-and-forth, but our hero ultimately kills Durant with a remote-control bomb.  The day is saved...by our cowardly hero.  The End. 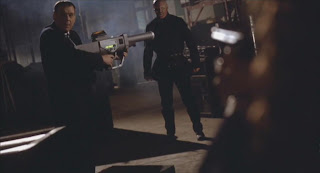 This is not really a good movie.  The tone is all over the place and I'm not sure how to feel.  This movie comes across as more serious than Batman & Robin at times, but as dark as Batman Returns at others.  Pick a tone, movie!  Speaking of Batman, this movie is in love with weird shots and Dutch Angles.  The acting is alright, but a few of the people need to know the meaning of the words 'tone it down.'  The biggest problem is that the movie doesn't explain a lot of things.  For example, how did Durant survive an exploding helicopter?  What are in those pills he's taking?  Seriously, why does Darkman have super-strength?  Plus, just like in Riki-Oh, it sort of comes and goes when it pleases.  Ultimately, a lot of this movie's plot is just pointless.  Does it matter that the other scientist was working on synthetic skin?  No.  Darkman is already a defender of the innocent and an enemy of Durant- he doesn't need motivation!  The whole thing is pretty ridiculous, but fans of '90s action films will enjoy it.  Is it on par with a Sam Raimi film?  No. 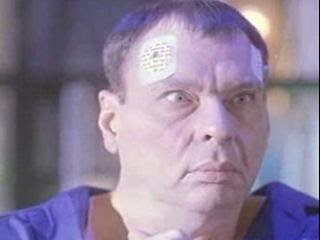 Up next, all of your unanswered questions about Darkman will be answered in the Direct-To-Video series' finale.  Actually, that's a lie- it's just a different villain.  Stay tuned...
Posted by Alec Pridgen at 7:08 PM