After the success of Blade and X-Men, Marvel had some money to toss around.  To that end, Avi Arad (their go-to guy for live-action Marvel goodness) produced this show... 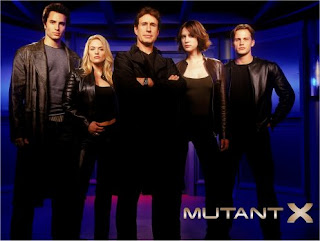 It's basically X-Men, but filmed in Canada and made on a tv budget.  A key difference is that mutants are apparently the subject of genetic experimentation and not some 'X-Gene.'  An evil guy who looks like Andy Warhol (seriously- that's your villain?!?) wants to track all of the escaped subjects down to create a super-human army.  Standing in his way is 'That British Actor You Know, But Can't Recall Anything He's Actually Been In.'  You know the guy.  He has a crack team of people to fight back against the man and his agents.  They have such powers as...
* The ability to turn intangible or turn super-hard.
* The ability to shoot lightning...once an hour.  Really.
* A woman who can move small objects with her mind.
* A woman with the power to 'influence emotions' 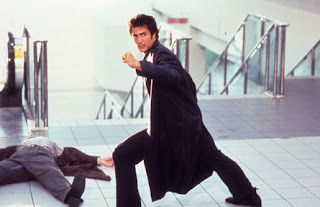 There is one important thing to know about what dates the show: The Matrix.  This show was made in 2001 and attempts to copy the 'wire-fu' that helped make the film a hit.  It's really freaking blatant!  Case in point: one of the mutants has 'tiger powers.'  What does that mean?  It means that she can flip around, do kung-fu and act like Neo.  Oh and her eyes sometimes look like that of a tiger.  In the two-part pilot/movie, the majority of the action involves fist fighting and kicking, as opposed to powers.  Especially when it comes to the 'tiger' woman, whose sole powers involve being able to be all Crouching Tiger, Hidden Dragon.

*
There's really not much more to say.  It's a fairly stock action show from late '90s/early '00s.  It's like any other show of its type- i.e. Renegade, Highlander- just with some low-fi effects shots and wire-fu.  Does it match up to the X-Men name?  Not even close.  With that said, you can do worse for brain-free entertainment though.  It's pretty much all fluff and no substance.  Zap me away, Lightning Dude! 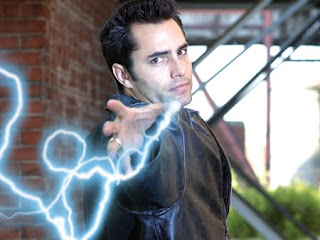 Up next, thanks to the benefits of YouTube, I can bring you a lost tv movie/backdoor pilot.  It takes place in the future time of...2010.  Stay tuned...
Posted by Alec Pridgen at 4:30 PM