If you're a fan of controversial, foreign cinema, this name probably rings a bell.  In case you aren't, here's what you need to know.  Nunsploitation is a sub-genre of Exploitation that involves dirty deeds and nuns.  The films usually involve lesbianism, some whipping and some light bondage.  Cases in point: The Sinful Nuns of St. Valentine, Images in a Convent or Sister Emanuelle.  Yeah, that last one is exactly what you think it is- a Black Emanuelle film with nuns in it.  While this has proved to not exactly be all that popular in Europe and America, it has lasted a bit longer in Japan, a country that is not Christian or Catholic.  The most recent one is apparently 1995's Big Tit Monastery (I'm not kidding).  Out of these films, this is one of the most notorious.  Well, let's jump right into... 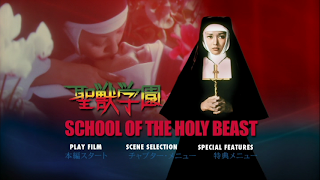 The film begins with...hockey?  Yeah, it does.  A woman goes on a long date that involves drinking, dancing and sex with some guy.  Who is he?  I don't know and she barely does either.  The reason for this big date is because she's going into a Monastery the next day.  Why?  You'll find out later, Mr. Impatient!  The initiation is pretty strict and the rules are very strongly-enforced.  The first night, she sees a young woman whipping herself because she had impure thoughts.  In fact, most of the plot is just a set-up to these scenes.  The nuns commit such infractions as...
* A pair of them eat regular food in a large portion when a box opens.  Those bitches!
* Another pair makes out in a long sequence.  Those...I have a hard time getting upset by this.
* One of them goes to the lone male Priest and seeks counseling after she steals money for her poor family.
* Our heroine sneaks two men in (one is the guy from the beginning) and has them rape the Mother Superior.  Um, hurray? 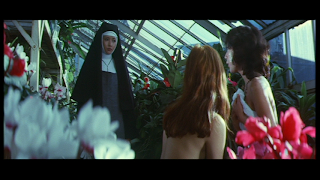 So what punishment do these 'horrible' women get for their 'crimes?'
* The women are forced to whip themselves.
* The woman are whipped by the nuns.
* The Priest forgives her, gives her some money and then...rapes her.  Um, what now?
* When they find out about her pregnancy, they whip her.  Yeah, this movie loves whipping.
* Our heroine is whipped and then hit in the face by large roses.  That's beautiful and painful. 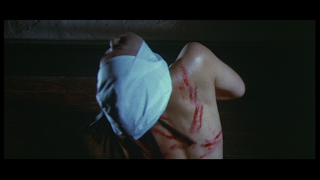 The film eventually sets up and resolves the whole plot with our heroine.  Basically, her mother got pregnant and was whipped.  As she died from a self-hanging, she gave birth to our heroine.  Yeah, that's not how it works.  Eventually, she learns that the Priest was her dad.  You mean, one of the three men in the whole movie and the only one of the right age was the father- my God!  One of the higher-ranking woman tries to kill our heroine twice and eventually falls through her own trap door.  When a new nun is brought in to straighten (ha ha ha, irony) out the place, she punishes our heroine and later tries to kill her.  That attempt ends in her falling out of a window and being impaled.  To get at the Priest, she tricks the blind man into having sex with her!  She confronts him with his 'crime' and...the ghost of her mom rips his heart out.  Wait, what?  The End. 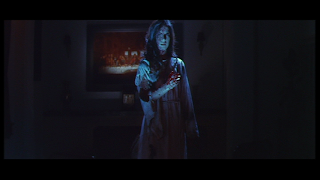 This film is not that good, but it does know what it wants to be.  The majority of the film is taken up by the lesbian/whipping scenes.  If you cut those out, you'd have about a thirty minute film!  The film is really just a series of pretenses to string those scenes together, so it's best judged as exploitation over actual cinema.  The women are pretty hot, although your 'enjoyment' is based on how much of a fan of whipping you are.  I know I've mentioned it a lot, but it is the elephant in the room.  The movie is full of more lacerations than there were aliens in Aliens!  If you're not into this for the exploitation, there's really not much else for you.  The plot is basically set-up in the beginning and the ending part, with the middle solely used for the dirty stuff.  It's not much of a movie, but it's definitely a notable work of exploitation. 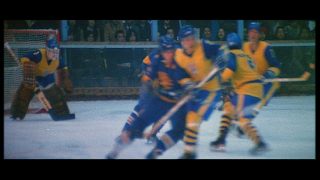 Next up, I attempt to tackle another Miike film.  If you thought his films were random and non-linear before, just you wait.  Stay tuned...
Posted by Alec Pridgen at 6:51 PM