It's amazing how little success can actually do for a series' success.  In 1985, this quirky horror film starring Roddy McDowall opened big and proved to be the second-highest grossing horror film of the year (just behind a Nighmare on Elm Street 2).  Naturally, when the sequel came out three years, the movie got roughly 1/10th of the theatrical release and failed to make the same profit.  Here's some math for you: 1,500 theaters and $24 million vs. 150 theaters and $2 million.  Did the audience change so much in the three year gap or did the studio doom it from the start?  Consider for comparison the grosses of Elm Street 2 and Elm Street 4 (which opened against this film): $29 million vs. $49 million.  Clearly the market was strong, so that can't be it.  Is it the fact that the original director (Tom Holland) was replaced by Tommy Lee Wallace for this film?  Considering, Holland directed Child's Play in 1988 and that made about $50 million as well.  What had Wallace done earlier, you ask?  A nice little film called Halloween III: Season of the Witch.  Then again, maybe the movie itself is to blame?  Let's find out in my review of... 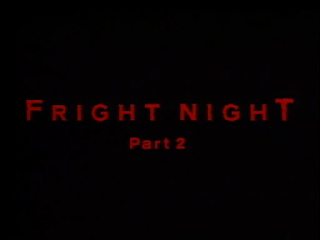 The film begins with a pretty quick recap of the first film.  In case you missed it, a kid sees vampires, befriends Roddy McDowall and kills said vampires.  In the ensuing time, the state believed the deaths in the last film to actually be that of a serial killer, a fact aided by vampires' bodies always disintegrate.  Our hero is being put through therapy in order to convince him that everything he saw was not real & that vampires don't exist.  Given the scene where he tosses out all of his vampire-killing gear, I guess it worked.  He's still friends with McDowall's character, who is a television host named Peter Vincent.  His show- Fright Night- is not doing too well these days, something not aided by his insistence to keep going off-script.  He meets up with our hero and his new girlfriend, talking about vampires and just generally making things awkward.  Our hero is having some other problems as well, as his sense of closure about the whole 'vampire' thing begins to waver.  For one thing, he sees suspicious people and activities all around him.  Of course, as a viewer, we know that what he is seeing is true, as we are greeted by the sight of the vampire clan in the area.  There's a mysterious woman, a Prince-looking guy, a guy who looks like Kevin J. O'Connor and that alien clone guy from The X-Files.  Ooh, scary! 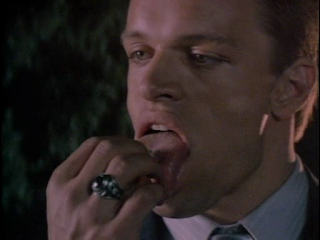 Things don't get any better for our hero as he begins to have some very vivid dreams about being visited by a vampire woman.  Never mind the fact you wake up with a cut on your neck every night, guy!  On a side note, his girlfriend never really senses the impending problem here either.  In her defense, she is distracted by her boyfriend's frequently-flaky behavior since it keeps her from going on dates with her.  One of these incidents involves him running late for a date and discovering that his roommate is going out on a date with the weird vampire lady from his dreams.  He pulls McDowall along for the ride to rescue him...only to discover that it is a party full of crazy people, but no vampires.  Despite seeing his friend get bitten, the man has no wounds, so our hero leaves- but only after getting another vampiric seduction scene.  McDowall hangs around a little bit longer & discovers that Prince-looking guy and the lead vampire woman are...well, vampires.  He flees, but the woman uses her Jason-style teleportation powers (it's supposed to be super-speed, I know) to stay ahead of him.  She explains that she is the sister of the lead vampire from the last film and will get revenge on our heroes.  The revenge for the young man, however, will be unique. 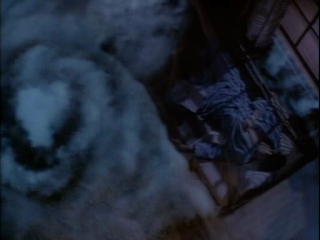 As it turns out, the woman's plan is interesting...but a little off when it comes to vampire rules.  She is turning him into a vampire by scratching his neck each time with her tooth, but not biting him.  They do a variation of this in Dracula II, but it still fails to have an exchange of fluids.  Around this time, O'Connor vampire attacks the pair, making our heroine finally believe her beau.  Her revenge for McDowall: taking his show and 'forcing' him to attack her on the air, which, in conjunction with his vampire talk, gets him locked up.  The girlfriend and the psychiatrist go to set him free, but the guy reveals himself to be vampire and attacks her.  When was he turned?  They don't exactly say.  She stakes him, but doesn't do it hard enough, forcing him to finish the job.  She breaks him out and the pair go off to rescue our hero from being officially turned, so that he'll live forever as a torture victim.  They load up with lots of gear, including a Catholic shawl, a tank full of holy water and a mini-stake gun.  They get inside, but get attacked by the O'Connor vampire.  He looks cool, but gets shot and dies within seconds.  The trio is caught, but true love turns our hero good and he causes alien clone guy to get scratched to death, as well as burning Prince-like vampire in the shawl.  The villainess flees via her elevator, so our heroes follow.  They corner her, causing her to try and turn the guy one more time.  He resists and allows McDowall to redirect some sunlight to her and burn her.  The film ends with the young couple making out.  Aw. 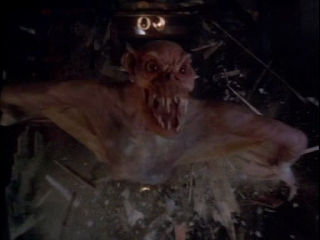 This movie is actually good, but is not for everyone.  The tone switches between comedy and horror at seemingly-random moments, something that the original handled better.  For example, the vampire gang kills some people and follows this up with bowling-related comedy.  Sure- why not?  The acting is somewhat good, but only from those you expect it to be.  The whole thing relies on you accepting these weird characters and their quirks.  One vampire wants to seduce the film's heroine before killing her, while another one only gets his blood from bugs.  There's also the whole thing with the villainess being a performance artist, which is just kind of odd.  Maybe it's like Animal House & they just worked in a real 'skill' she had to appease her.  How the network plans to replace McDowall with an oddly-dancing woman is anyone's guess though.  Like most films that have become obscure and hard to find, it's not quite as neat as you would think.  It's good and manages to entertain, even if it's never sure what it wants to be.  In spite of all this, we have a wealth of great reaction shots from the late, great Roddy McDowall... 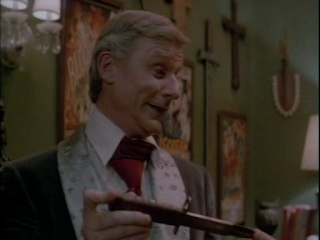 Next up, we close Forgotten Sequel Week up with a made-for-television sequel to a horror gem.  Is a 21-year delay good for a series?  Stay tuned...
Posted by Alec Pridgen at 11:36 PM