Seriously, why did you make this movie?  Were there any unresolved plot threads from that movie that you had to address?  No.  Besides, you didn't actually make a sequel to this movie- you just made your own crap and called it a sequel.  This film does involve the FBI and tracking of a serial killer, so I guess that's enough of a connection.  Then again, it could very well be Saw XIV for that matter!  Yes, they will eventually get that far- you know it's true.  Anyhow, this involves our heroine using her barely-explained and extremely-specific psychic powers to track down a killer.  Being a cheap, direct-to-video movie, it has bad acting, a low budget and green screen effects pulled right out of an Amscot commercial.  Why do I bother?  Oh right- because I live to please.  Will you be as pleased as me?  Find out in my review of... 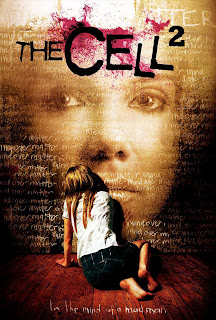 The film begins with a silly bit of narration explaining that the FBI hires psychics- no, they don't- to find serial killers- not true- and that Jennifer Lopez's character was one of them & this story is about another.  Wow, could you have phoned that in anymore?  I guess it's still better than Hobgoblin 2's plan of being a remake that also acknowledges some of the events of the first film, but has the character just not remember it!  After a ton of aerial footage of Utah's big plains and hills, we get our plot explained.  The film's serial killer is a man named The Cusp.  Why?  Well, they'll explain that in about thirty minutes, so hang tight.  Our heroine is riding in a helicopter with her boss and using what looks like a Bluetooth headset to try and get a fix on the killer.  How can she do this?  They'll explain that in about forty minutes, so hang tight for that too.  On the ground, a squadron of cop cars are driving underneath them.  Our heroine narrows his location down, which apparently requires the helicopter to land for a moment to explain this to them and start flying again.  Um, what?  Despite her boss's warnings, she attempts to access the killer's mind and see what he sees.  What actually happens, however, is she manages to see from every angle except his own eyes.  We're like ten minutes in, guys, could you try to not suck so bad.  Anyways, the killer spots her...somehow and they rush in, only to find the girl dead.  You didn't surround it, huh? 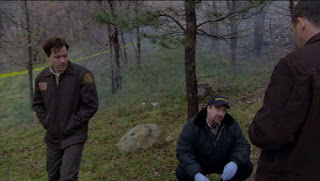 The film gives a '1 Year Later' tag and shows a couple having sex.  Thanks, movie- I was wondering if the girl had breasts!  After that pointless T&A, she gets captured by The Cusp and the cops investigate the scene.  Right away, 'The Scooby-Doo Rule' tells you who the killer will be.  Will it be nameless cop, nameless coroner or that character actor we all can recognize.  Hmm, I wonder.  The FBI gets called in and the boss goes to get our heroine back on the trail.  It turns out that she quit at some point and became a pet detective.  She does the usual 'I can't go back, not after what happened' speech, which is ruined by some shit writing.  She says 'I've chased him for the last three years,' which goes against that whole '1 Year Later' thing!  She agrees to go and gets the lowdown on the case.  Meanwhile, we see The Cusp has the girl in his clutches and he goes over his M.O. a bit.  Basically, he kills people through various means- electrocution, etc- and then revives them.  As we learn later, he's done this to 23 different women and our heroine was one of them.  He mistook her for dead, however, and dumped her body, which gave her psychic powers...somehow.  He shows his sadistic side, but the girl does her best to resist.  Naturally, she turns out to be related to the Sheriff.  Hurray. 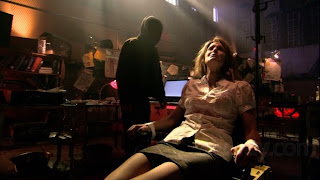 A lot happens in the last forty minutes or so, so let me get right to it.  The Cusp plants evidence that suggests the Sheriff to be the killer, but our heroine believes him and helps him escape.  We set up a love sub-plot that meanders a bit, while the killer randomly decides to reveal himself to be...Frank Whaley- duh!  His calm demeanor suddenly becomes manic, since Frank can only play that- good consistency.  Eventually, they track him down by figuring out who's buying needles in bulk.  He sets up the girl by getting her to go into his mind, whereupon he proceeds to drug her...which traps her, apparently.  The cop and the lead FBI agent show up via helicopter, but Frank somehow manages to beat up the Sheriff who's six inches taller and outweighs him!  In his mind, he explains some bullshit about how he learned Psychology and has blocked the image of himself from her.  The killer flees to the helicopter, but the Sheriff hops on.  In the man's mind, the girl blinds him...somehow and he sets it down.  A showdown between the Sheriff and the killer occurs & our heroine manages to get free of his mind.  Just in time too, since he gets shot in the head by our hero.  Using some weird psychic crap, she locks him in his mind and exploits his fear of the dark- really- to doom him.  Um, he's dead honey.  Oh yeah, they proceed to make out right in front of the corpse.  The End. 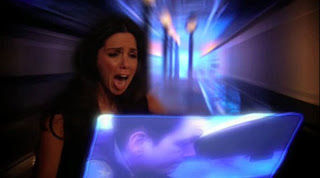 This movie is very much not good!  The plot is silly, the acting is generally not good and the whole thing just feels dumb.  I mean, this is really not The Cell 2.  If anything, this is a shitty film version of Second Sight (look it up)!  In a lot of ways, this reeks of an Asylum release, what with the name similarity and the casting of a woman who vaguely looks like Jennifer Lopez...if you're Helen Keller.  The biggest star of the film is Frank Whaley, a character actor who most people will recognize, but will not really be sure why.  The plot has the two-fold problem of not explaining things and explaining them...but in stupid ways.  They take forever to explain our heroines powers, which is annoying, but when they actually do explain it, it's shit.  Seriously, nearly dying several times gives you magical brain powers?  Bull-shit.  The whole idea of this killer is a bit dumb as well, as he's apparently obsessed with recording people's dying moments.  That's interesting on paper- just like the name The Cusp- but does not work well on screen.  Have we all not learned the lesson of The Exorcist II- not everything works on film!  I think that The Cell is a film that barely passes the test of time, but this film is dated shit- it was made in 2009! 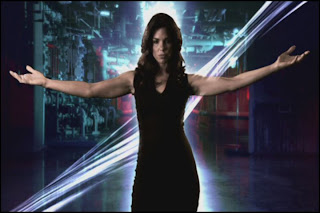 Up next, Forgotten Sequel Week begins with a look at a rare sequel to a Wes Craven film.  I hope you like flashbacks!  Stay tuned...
Posted by Alec Pridgen at 10:31 PM