Germany is a curious place for a lot of reasons, but which is the worst?  Is it their penchant for war with their neighbors?  Is it their desire to fill the internet with the dirtiest stuff you can think of?  I prefer to think it is their need to make zombie films about killer Nazis in the snow.  However, this film is actually from Norway.  They were at least smart enough to make laws preventing the use of Nazi imagery.  Norway said 'Screw that noise!' and made this film.  Dead Snow is a low-budget horror import that made its way to our shores right around the end of last year.  Since I'm a late adapter, I only watched it a few weeks ago and am reviewing it now.  It's a tale about love, loss and, well, Nazi zombies.  To be fair, it's not so much about love, save for one really icky scene.  Is it good though?  Find out in my review of... 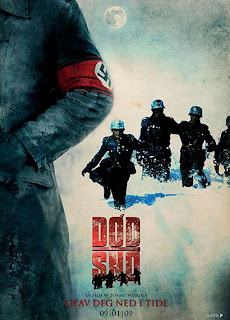 The film begins with a person running around and getting killed in the woods.  Wow, way to break the mold early, guys.  After the credits, the narrative cuts to a group of young (read: 30 year old) Germans going on vacation out in the woods.  They do all the usual stuff- drink, ski and sled on silly objects.  This goes on for a while until they stay in for the night and talk about stuff.  One of the main subjects is the girl who did not seem to show up for the trip.  Gee, I wonder what happened.  All of a sudden, a creepy, older man shows up and talks about...strange shit.  He gives them subtle hints about a dangerous force in the area, but won't elaborate.  He also puts out a cigarette in their coffee- nice guy.  That night, they talk about everything except that.  Out in the field, the old man is sneaked up upon by a mysterious force and stabbed to death in his own tent.  By the way, plot hole establishment in progress.  As the night progresses, we learn that these people are apparently all med students and one of them is afraid of blood.  This comes back never and just serves to confuse me.  Oh yeah, they also find a stash of Nazi gold too. 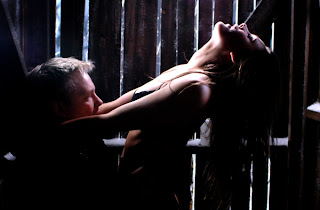 After another day of partying and such, one of them goes off to find the girl.  The fat guy- who is wearing a Dead Alive shirt by the way- goes off to the outhouse and, for some reason, is joined by one of the hot chicks.  She proceeds to screw him, which is gross for a couple reasons.  Afterward, he leaves her there- nice guy- and she is attacked by some mysterious people.  Finally, a swarm of them attack and reveal that they are...Nazi zombies!  Yeah, it's odd that they build up to this like a surprise considering that they are all over every poster and promotional art.  Crazy shit goes down as the villains attack and try to break into the building.  The high-point: the fat guy gets his head ripped open like a bag of Doritos!  While this is going on, the other man falls into a cave and discovers a treasure trove.  There is also a bunch of Nazi helmets and one of the zombies themselves!  He is a rough and tumble battle that ends with a dead...er Nazi zombie.  This creates a big divide between the movie: our bad-ass hero and the completely terrified friends.  Which movie are you? 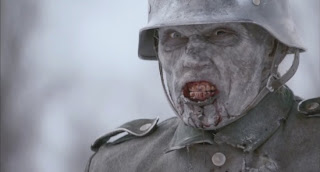 Since this movie is so recent, I will be a bit vague about the rest of this.  Instead of a closing summary, I'll give you some highlights to look for...
* Our cool hero puts a machine gun on his snowmobile and kicks some ass!
* One heroine decides to try and hide from the zombies, but is not all that good.
* We get a scene right out of the Call of Duty: Modern Warfare style: showing a character dying in a weird first-person perspective.  That's random.
* Another heroine is cornered by a zombie and decides to snap off the edge of a cliff- while she's still on it!  Why?!?
* Our hemaphobic hero guns down numerous Nazis with a shotgun and uses a chainsaw.  Consistency? 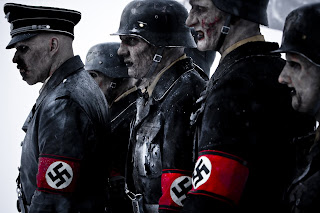 This movie is good...but not consistent.  On one hand, we have the parts with our bad-ass hero on his own and killing zombies.  On the other hand, our other heroes run like scared children for 80% of the movie.  Guys, could you make one movie and not two?!?  I had this exact same problem with To Kako (aka Evil), which had our heroes karate-killing zombies in one scene and fleeing in the next!  On top of that, the actual deaths in the film are very random and sudden.  I won't spoil them, but I will say that they blatantly steal one from The Ruins.  Could you guys aim higher next time?  That said, the movie can be very fun at times and doesn't feel so foreign that us Yanks can't get into it.  If they could have made one crazy, kick-ass movie about zombies being killed in splatter-style ways, I would be on board.  Likewise, if they had made one scary movie about people fleeing for nigh-unstoppable zombies, I would buy it.  As it is, the movie is dumb, violent and confusing.  You'll have some fun, but feel let-down too. 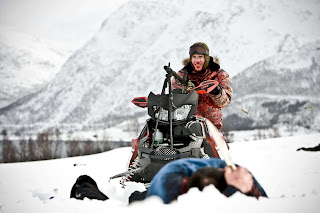 Up next, a movie with a ridiculous title that tries to sound like another film.  This is going to hurt, isn't it?  Stay tuned...
Posted by Alec Pridgen at 10:40 AM