My short history with German killer rat films has been tumultuous.  I bet that's the first time you've heard that sentence before, huh?  Last month, my plan was to watch the two films: Revenge of the Rats and today's film.  As the month was approaching it's close, this film was not becoming available, continuing to stay at Short Wait status on Netflix.  I had to think on my feet for a bit and make it all work out.  Nearly a month later, you're being graced with the sequel.  For those who didn't read it, a brash commando unit has to stop an invasion of killer rats.  In the end, the day was saved, but one rat was left with a nest & seemed to vow revenge...at least, as well as a CG rat can.  In this film, that sequel-bait is ignored and rats show up somewhere else.  Don't you just love lazy writing?  I have to address one thing briefly here: Netflix's confusion.  Revenge is listed as being made in 2006, while this film is listed as being made in 2001!  Either the Germans invented time travel, wasted it on this and forgot about OR Netflix needs a new editor.  Anyhow, this film could be the Black Plague or just a cheese-eater.  Find out in my review of... 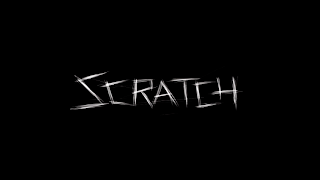 The movie begins in typical serial killer fashion by giving us a pointless kill scene.  It involves a woman in her house that's randomly outside of the village.  It would at least make things more interesting if you explained why she was there, movie.  Was she a witch?  Anyhow, she ignores her dog and dies when rats fall from the roof and into her bath.  Pointless nudity- check.  Pointless death- check.  Victim who can't simply climb out of a tub- big check!  Let's ignore that for a while and reintroduce our hero from the first film.  He wakes up late and uses his police power to borrow a helicopter, stop traffic and get his daughter-in-law onto a bus for her trip to camp.  You're really testing the famous leniency and patience of the German military, you know!  After that, he heads out to a small village for a trip.  By the way, say good-bye to the little girl, save for one scene in the finale.  Our story cuts to a bunch of men in military outfits and shooting each other.  As it turns out, this is a company retreat and it's led by our gun-toting hero from the first film and his buddy.  They leave, but not before making a very off-color joke.  When the man complains about how embarrassing the executives are, his buddy counters by saying 'you did what we've been trying to do for 60 years- make people not scared of the Germans.'  Ouch.  Anyways, they drive out to the same town and meet up with our hero.  The reason for their trip: their other buddy is getting married. 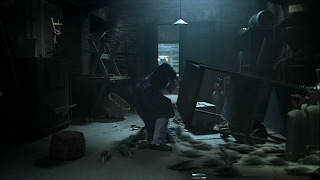 Their friend is the Mayor of this tiny village and could not be happier to get married.  His bachelor party is disrupted by a call up to the house from Scene 1, since the dog has gone crazy and it apparently used to be his.  Um, just have him be called because he's the Mayor, movie- this just seems silly!  They have to kill the dog, but are more disturbed by the idea of rats.  They talk to a scientist who explains that he's not seen anything.  In the next scene, we find out that he was lying and is actually a scientist who's been working on a way to kill rats.  Why hide this?  Who knows?  His assistant lost some of the test subjects and tried to hide this face.  The man runs off to catch his old rats & never to be seen alive again.  Our heroes find some proof of the rats, but our gun-toting friend finds time for something else.  He runs across a tiny woman who calls him out, leading to him explaining that he sees guns as a replacement for women, not his own phallus.  How is that different exactly?  She sticks around for no reason, which will come in handy later.  Our heroes finally figure out that the rats are real when they attack the groom-to-be.  They figure that the rats will be at the Knackery (a building where dead bodies are mass-cremated) and they're..right.  Our heroes try to escape the CG swarm, but our main hero dies.  That's right- they kill him off. 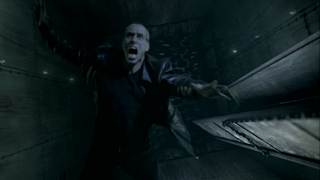 Our remaining heroes try to get over this random and sudden loss, but don't do that well.  The gun-toting guy (now the lead hero by default) tries to figure out the scientist's random notes by...well, staring at them.  Even he realizes how dumb this is, but just keeps going.  He gets upset with the whole situation and just blows up the Knackery with a rocket launcher.  I'd complain about this randomness, but it's just too awesome.  When the sun goes down, the rats attack the village.  Thankfully, our gun-toting hero and his non-girlfriend are there to save a young couple and a weird army veteran.  Eventually, they figure out what is going on.  The rats were genetically-engineered to die when the temperature drops low enough, which causes them to attack when it does.  Their plan is simple: making one place warm, lure the rats in and blow it up.  Naturally, the trigger doesn't work when everything is in place.  Our gun-toting hero goes down, fixes the wires and tosses a grenade into the room.  He manages to outrun the flooding water and save the day.  After the funeral, the wife of our good, dead hero lets him have the man's car & he drives off with his now-girlfriend.  The End. 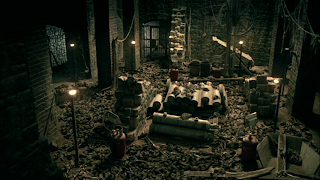 This movie is...about the same as the first one. The plot is silly, the acting is stiff and the effects are not that good.  I should point out that the movie is only available with a dubbed audio track, so my comments on the acting could be negligible.  I say that, of course, with the assumed knowledge that it still probably sucks.  The plot is interesting in theory, but just comes across as silly.  So many of the ideas are just pointlessly-silly.  Did it really have to be the guy's old dog?  Did we really need the couple to get together after that scene?  Did we really need that monologue in the first place?  I have to address the biggest part though: the special effects.  Their CG rats always look like CG rats and are never once convincing.  This is especially true when you get to see real rats move around.  In many ways, it's as jarring as seeing the bit from 2012 where our heroes are trapped in real water, after seeing 90 minutes of nothing but CG water.  Plus, why would you kill your main hero like that?  I could see doing it in the opening scene a la Nightmare on Elm Street/Halloween to set up the idea of 'nobody is safe.'  Doing it right at the hour mark just reeks of pure silliness.  Good-bye, guy who looked like the host of Dinner: Impossible- your stiff acting will be missed.  Unless you really like Germany, rats and bad writing, you can skip this one. 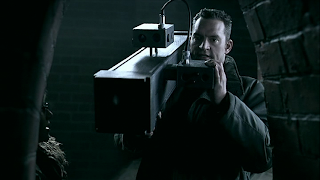 Up next, Stephen King's only book-to-film adaptation he directed is up to bat.  Is he Michael Crichton from Westworld or from Runaway.
Posted by Alec Pridgen at 11:06 AM