I don't expect much from movies made by The Asylum.  Is it any wonder?  I mean, just look at the films I've reviewed of there's so far.  Monster was an even worse version of Cloverfield that never showed you the monster and played with the video feed like a kid with a Hot Wheels car.  Sherlock Holmes (2010) miscast everyone and gave us a plot involving Holmes' brother Mycroft attacking England with a robot dragon- need I say more?  Death Racers is a film starring The Insane Clown Posse and features almost no vehicular mayhem at all.  I can only take one more of them this month, so why not a movie that's a knock-off of a film that I didn't care about in the first place?  A Haunting in Conneticut was part of a trend of Haunting/posession films that include The Haunting of Molly Hartley, Blackwater Valley Exorcism and more.  Naturally, The Asylum hopped on that bandwagon and tried to make some scratch.  What's different here?  Well, they chose to steal the real legend from a real place- the Winchester Mystery House.  This historical landmark is actually a tourist attraction, a fact I know because I've been there.  Nobody lives there, but why let logic stop a good...or bad story?  Find out the truth in my review of... 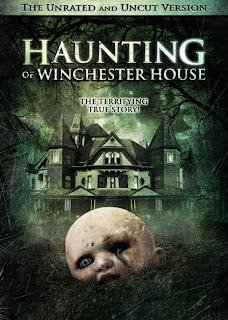 The film begins with a UPS driver delivering a package to the titular house.  When is this?  Well, the lady has an iPod, so it can't be that old.  Speaking of Apple, her device acts up as she approaches the house and drops off the package.  She speaks to the lady inside, who has a minor freak-out, tells her to flee while she can and shuts the door.  The woman exits as the owner tries to mark a circle on the living room floor, before being pulled out the window.  We time-jump to our heroes, a family clearly mourning some sort of loss.  I say it's a 'time-jump,' although the film never bothers to say how long.  Given that the owner was killed by a ghost, I can't picture it being that recent!  Regardless, the family leaves behind a bunch of baby clothes and items, so you can figure out what happened.  In a rare touch of subtlety in an Asylum film, they don't really harp on the point.  Score one for you, although I think it will be the only point you get!  They drive up a hill towards the house when another car suddenly shoots down the path, narrowly avoiding them.  They curse the people in the other car and keep going.  The family reaches a chained-up path, which makes me really wonder where the hell those other people came from!  None of the keys they have for it work, so they approach the place on foor.  Well, the move is already off to a great start! 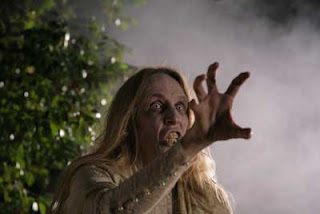 In the house, our family is happy about how spacious the whole thing is.  Of course, before I go any further, I have to address the film's elephant in the room: the CG house.  For exterior shots, they insert a CG model of the real Winchester House....badly.  It looks fake, out of place and doesn't even match for scale.  This eye-sore doesn't show up much, but it's still stupid as shit.  Anyhow, the daughter picks a lovely room with a broken window and wallpaper designed to look like bookcases.  For some reason, they never address this, making me wonder if it was supposed to really look like a bookcase.  After this, things don't go well as the daughter sees a ghost girl and the couple is interrupted by a mysterious black man.  Hey, the guy from The Shining is moving up in the world!  He introduces him, tries to make himself at home and leaves.  That was kind of random, although the movie implies that it was part of something bigger.  The daughter ends up stuck in the basement when the door shuts itself and she has to be rescued.  The family is visited by more ghosts and random apparitions.  By random, I sure as hell mean random.  They are visited by ghosts of the former family that lived there, including a deaf guy who's supposed to be menacing...I think, an old lady with crazy eyes (see above) and the little girl.  On top of that, they are visited by the ghosts of people that were killed by Winchesters.  Not to nitpick your film, but there would be hundreds of them if that were the case!  Oh yeah, some cops show up and get killed for no reason too. 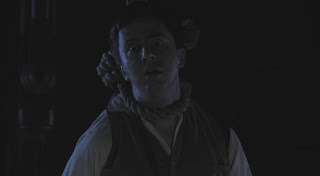 As the movie goes into its third act, it becomes more reliant on randomness and jump scares.  The old lady shows up some more around the time that the daughter goes missing.  They try to call the police, but only static comes through.  Fortunately, their friendly, neighborhood black man whose an expert in the paranormal comes to the rescue.  He helps them fond off some ghosts thanks to a trinket with the hair of some lady who could touch ghosts in it.  Don't look at me- I didn't write this.  He goes to set-up the same circle used in the first scene, but gets chucked into the wall and dies.  In a silly effect, his ghost exits his body, looks at it and falls over.  This happens again when our heroes go outside and see the dead cops too.  I would be remiss in not mentioning the part where the old lady ghost tries to pull our hero into some sort of CG hell.  They run around for a while, experience more of the weird symptoms and run into the deaf ghost.  Eventually, they figure it all out.  As a kid, the little girl hid in a box, but got trapped in it unwittingly by the deaf man.  By freeing his ghost, the curse was lifted.  Reunited, our heroes go to leave the house, but the wife discovers the truth about them.  Are you ready?  They were dead the whole time after their car crashed, which is supposed to explain the static/white noise effect when they called the cops, why the black guy didn't touch them and why the lock didn't work.  After a silly monologue from the black guy (which they don't hear), the woman doesn't tell the family the truth so they can live together.  Um, what?!?  The End. 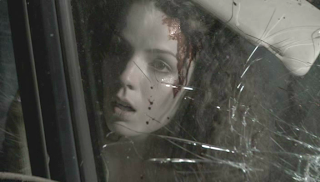 This movie sucks in all of the ways that most Asylum films do.  The acting is bad, the production values are awful and the script is just stupid.  The movie rips off several films here, including The Haunting (finding the dead girl's body to stop the curse), The Legend of Hell House (the house's curse), The Sixth Sense (the ending) and even The Others (also the ending).  That's just the tip of the iceberg though.  The green screen effects are bad, especially for a reason I haven't addressed yet.  You see, this movie was made to be shown in both 2-D and 3-D.  The result is that in my 2-D version, the images are projected at a forced perspective and look like shit.  When they're in a real environment, it's practically night and day when compared to the green screen.  In addition, so much of this movie was shot in a dark, unlit house to cover up their bad make-up effects.  Some of it looks decent, but so much doesn't.  For example, they do a close-up on one dead cop, which makes the false neck covering even more obvious.  How about the deaf ghost being really pale on his face, but not his neck?  Ultimately, this whole thing proves to just be pointless and dumb.  Why were they haunted by ghosts when they were ghosts?  Aargh- my brain hurts! 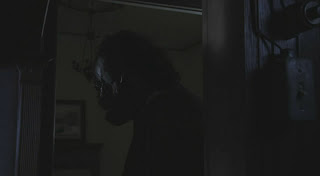 Next up, a Turkish movie that defies all logic and common sense.  If you want to see a Mexican wrestler team up with an American icon against a Marvel hero, this is for you!  Stay tuned...
Posted by Alec Pridgen at 5:27 PM