Blockbuster Trash: I'll Always Know What You Did Last Summer

Hey kids, have you ever wanted to resurrect a dead franchise for fun and profit?  You have?  Well, if you were a small-time producers of Direct-to-DVD films in the last five years, you've been living the dream.  Everything from The Cell (see next week's entry) to Road House to Bachelor Party has been getting the sequel treatment.  These films have pretty much nothing to do with their predecessors and usually get about as much attention as you would expect.  This market has been so rich that even films like White Noise and Glass House have gotten sequels!  All of that is a set-up for today's movie, the film that's technically the third film in the series.  The reason for this film being able to exist is due a technicality in the licensing rights.  You see, I Know What You Did Last Summer is actually based on a book by the same name that was written in 1973.  They licensed that and made this ridiculous movie.  What's changed?  Besides the location, logic behind everything and the cast?  Not much.  Teenagers are still dumb and blood still flows.  This is... 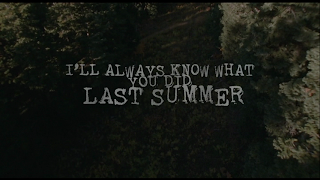 The film begins by setting up its deal and bleak location.  Basically, it's set in a ski resort town that is trying to rough its way through the summer drought.  Our heroes are a bunch of 'teenagers' that are striving to get free from this place and get a life.  At the July 4th carnival, they tell the tale of The Fisherman, a killer who shows up every Fourth of July and commits rampant murder.  Hey, remember that whole 'revenge' idea from the first two films?  Well, screw that shit!  While they're walking around, The Fisherman shows up!  He chases people around, leading up to one of their friends climbing to the top of a building and leaping off.  Out in the Parking Lot, our heroes are cornered and learn...that the 'killer' was actually their friend.  That's right- this was all a prank.  Hey, go back and tell your buddy about that.  Oh wait, he's got a pipe through his chest, so he's not partying anymore.  Out in the woods, our heroes vow to keep the secret safe, since their dead friend was the Sheriff's son and 'he'd make life hell for them.'  Yeah, how dare he punish you for committing Criminally Negligent Manslaughter.  With that, the movie jumps ahead a year.  Where will our lovely heroes be then? 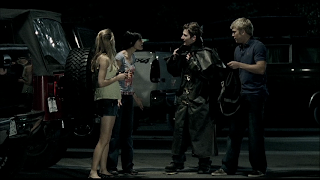 As it turns out, life has been a mixed-bag for our protagonists.  The blond jerk lost his internship and is a Lifeguard (not the omni-powerful X-Men character), while the rest are still in town.  Shockingly, the moody brunette is in a rock band!  The guy who dressed as The Fisherman has a job fixing up old ski lifts, which I'm sure is very fulfilling.  The major thing is that our heroine/final girl comes back to town and learns about her blond boyfriend's misfortunes...at a party.  He couldn't call or anything, apparently!  That night, our heroine is left alone in her parent's house, an incident that is apparently quite rampant in this town.  The only 'adults' we see are law enforcement, making me wonder if this isn't the town from Who Can Kill A Child?!?  While stuck in the house alone, she gets a text message...or fifty.  What do they all say?  "I know what you did last summer," of course!  She freaks and goes to see her brunette rocker friend, who goes all emo and complains about her not coming to any of her rock shows.  Three seconds later, all is forgiven.  The film sets up their lift-repairing friend as a Red Herring early on, having him act generally creepy and weird.  The blond ex-boyfriend believes none of this until he gets an 'I Know What You Did' marked in water poolside.  How did The Fisherman (if it's him) sneak up there and away without drawing any attention? 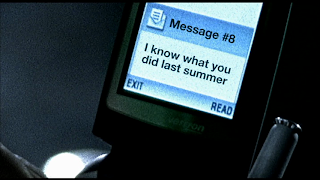 Just because this movie is dumb, they kill all the Red Herring business by making the suspect become the first victim.  Wow- just wow.  We get a lot of jump scares, random attacks and non-sensical bullshit.  For example, The Fisherman attacks blond ex-boyfriend, stabs him in the foot and leaves.  Huh?  More filler comes in the form of a teased relationship between our heroine and the deputy.  He starts acting suspicious and vague, so maybe he's the killer.  Facing down potential death, our remaining heroes group up with one of their buddies from earlier and let him on in everything.  They come up with a simple solution: don't be in town on July 4th and they'll live.  Of course, a few scenes later, they punch a giant hole in that plan.  You see, our heroine sits down the new guy and explains to him the legend of The Fisherman.  She addresses the previous two films' events as real.  For those not in the know, the second film involves our heroes getting chased to The Bahamas by The Fisherman.  Think, movie- think!  Brunette rock girl ruins this plan by saying that she has to do a show that night to get discovered by an agent.  At the show, our heroes are stalked by The Fisherman, which leads to the death of brunette rock girl, blond ex-boyfriend and the Sheriff.  All of this leads up to the biggest and dumbest reveal of all time...

*
The Fisherman is a zombie!  That's right- a zombie.  Not only that, but he is a super-strong zombie.  This *thing* shakes off two shotgun blasts to the chest, impales a sheriff on a forklift edge and rips the door off a piece of construction equipment.  Valiantly, our heroes turn on a thresher (just keeping those around, huh?), stab him through the brain with his hook and knock him into it.  Cut to another year later and our heroine/final girl driving back to town.  She gets a flat and is killed by The Fisherman as the credits roll.  Um, how did he get into the desert and sneak up on anybody?!?  Aargh! 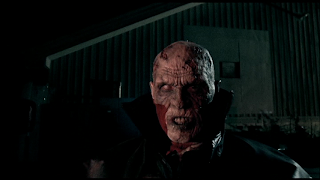 Dear God, this is a dumb movie!  It takes the stupid and flimsy pretense of the first two films and makes them look like Hamlet by comparison.  What motivates the killer here?  He's mad at them for impersonating him, I guess, but they also make his legend grow.  Why kill them exactly?  The dumbest part is that the movie sets up the revenge angle with the Sheriff, but completely drops it by the beginning of the third act.  Why pretend to be a mystery film at all?  The blood and gore is actually pretty minimal here and the pacing makes that feel even worse.  Want 90% of the action/gore in the last fifteen minutes?  If so, I have a movie for you.  It's hard to write this with a straight face, but I'll say this: this movie makes the '90s slasher return look damn brilliant!  Those movies got repetitive- seriously, watch Valentine and try to correct me- but they did the job.  This bullshit is...well, I don't know what it is.  Oh wait, I know- it's a giant lie!  You can't rip-off a movie, but make it okay by referencing it as being real!  Here's a better screenwriting idea off the top of my head: have the older survivors taunted by a mysterious man who may or may not be The Fisherman.  At the time this movie was made (2006), they could have gotten Jennifer Love Hewitt for a cameo role at least!  You want a good reason for revenge?  Watch this movie and then look up the people behind it! 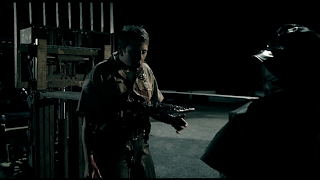 Next up, I celebrate Mother's Day the only way I know how: with a French film about an alien parasite.  I need psychological help, don't I?  Stay tuned...
Posted by Alec Pridgen at 7:16 PM