There's only one reason to see this movie.  It's not the premise, which is basically just a rehash of The Burning.  It's not the script's strength, because that is more Steve Rogers pre-serum than it is Steve Rogers post-serum.  It's certainly not due to the notoriety of the people behind the film, since I've never heard of these people before.  What's the reason: it's star attraction.  Like many horror films, they try to cover for all of their weaknesses with a notable name in the cast.  Who did they get?  John Rocker.  Before you non-sports fans try to Google him, let me just tell you who he is.  He's a former baseball player that got famous for unleashing a racist tirade against New York City.  Needless to say, attacking the city that houses at least 60% of our stand-up comedians can't end well.  After a ton of controversy, he changed teams a few times, retired, came out of retirement, appeared on Pros vs. Joes & went back into retirement.  At the height of the controversy, he was cast in this crappy horror film.  Will it live up to the 'high standard' of Blood Harvest?  Find out in my review of... 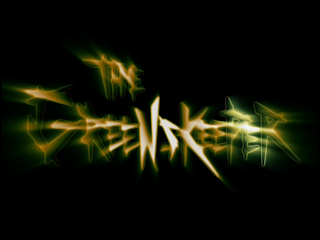 Our film begins with a weird sequence involving a young man walking through a daydream.  We're not supposed to sure of that at first, but it's pretty damn obvious.  Throughout the film, our hero will have weird visions/dreams, seeing stuff like a man burning alive or a burnt body crawling out of a lake.  Since it takes them well over an hour to explain this, it just comes off as annoying.  Our hero is a pasty guy who wants to be a writer, but has no money and works as a greenskeeper.  In spite of that, he has a hot, but bitchy girlfriend.  What- you don't like spending the night at his house full of stoners?  I think you're just being picky, honey.  As it turns out, he only has the job because his mother married a rich guy who owns a country club.  There's more to the story as there is some sort of tragic story with his father.  Is this related to the dreams?  Who knows?  Besides the two people, we are introduced to a ton of people who practically have 'I'm going to be killed' written on their foreheads.  They're drunken idiots who are annoying as hell and just grate on you.  It really makes you wish that they would die a lot sooner than they actually do.  Speaking of dying, some random douche-bag gets killed by a man in a greenskeeper outfit.  Wow, I barely even knew him. 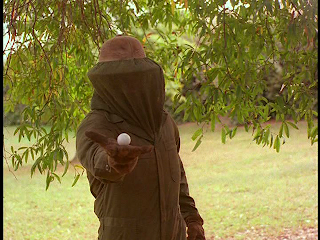 The owner of the club covers up the crime, but this is a plot point that will not exactly fit with the eventual plot reveal.  The annoying part of our cast decide to throw a party, but their location falls through.  What can a bunch of idiots think up on a short notice?  Throwing the party at night on the grounds, of course!  To do this, they have to convince our hero to go along with it, since he has the keys to the building.  Before that comes to fruition, we have a couple of random plots to deal with.  First, we have the senior greenskeeper who is made out to be a possible suspect in the killings.  Other than that, he says weird lines and sits around.  We also get an awkward birthday party for our hero where he is almost given the club ownership.  The mother is also his drunken mother, who is pretty much just a punchline and a plot point.  In addition to all of that, we have our hero flirting with an Hispanic woman who works at the club.  All of the neophyte club people hate the idea, but he doesn't care.  Back in the plot, our hero agrees to host the party and invites the girl he likes.  Gee, this won't all end in some sort of murder spree, right? 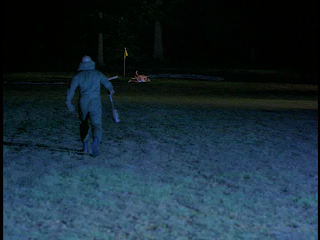 The drunken, partying idiots run around, dive in the pool and just generally act like asses.  Eventually, they all split up, setting our killer on his spree.  This bottom heavy plot features nearly all of the action in the last forty minutes.  The tennis instructor gets shot with nails (from the ball launcher) and the girl with him is impaled on a door knob...somehow.  One pair has sex on a random patch of AstroTurf and get killed by the device used to punch holes in the gold course.  The swim coach is drowned and has his throat cut as well.  Lastly, the final pair is killed after sex by impalement (the guy) and having some shears thrown into their back (the girl).  Around this time, our hero has left and misses all of the action.  Is he the killer?  You really think so?!?  The Hispanic girl shows up later and comes across all of the bodies in the order that they were killed.  Thank you, horror cliche dating back to Friday the 13th!  Eventually, the greenskeeper chases and kidnaps our heroine.  She runs to our hero's hands and the pair are saved by...the old man.  Well, not quite.  He gives a ridiculous and long explanation for everything that happened.  The greenskeeper was our hero's dad and he was burned by the man.  All of the killings were done by him and not the dad.  After this, our heroes manage to launch a lawnmower blade at him and kill him.  The pair's make-out session is broken up by the dad's blood spraying on them.  Ha ha? 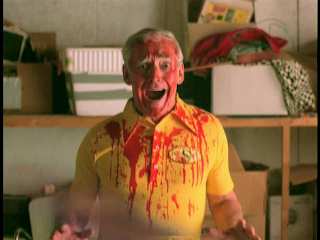 This movie sucks for a lot of reasons.  Is this a horror comedy?  No, not really.  It acts like it at times, but nobody ever cracks a joke.  It's either a really shitty parody or one so clever that it never reveals its hand.  As I said earlier, all of the action is at the end, which makes the first two acts painful.  The acting is universally-bad, the writing is terrible and nothing is all that interesting.  In spite of having THREE people as the Producers/Directors, this movie is extremely-amateurish.  Let's discuss the real meat though: Rocker's role.  Well, simply put, he does jack shit.  He has three flashback scenes which are splice throughout the movie and later played whole.  The rest of the time he is supposed to be the big menacing character...who's always wearing a mask.  Here's the kicker: he has a stunt double!  You hire a pro-athlete to be your heavy and he can't do his own stunts.  He also never utters a single line, although a lot of heavies are silent.  This whole thing has more holes in it than the course itself.  Why did the old man kill the douche-bag in the early scene?  All it led to was him hiding the crime, making him looks suspicious.  His logic of killing everyone- including our hero- and blaming it on the supposed killer makes some sense, but not that.  This movie is so bad that they show a parody horror film about a killer milk man in it.  You know what?  I'd rather watch that one! 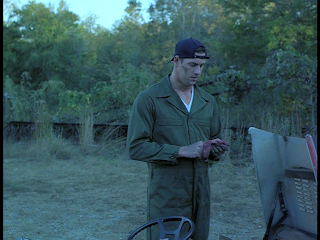 Next up, I finally get to review the sequel to Revenge of the Rats.  Will it be better than the original? Stay tuned...
Posted by Alec Pridgen at 11:34 PM