You couldn't escape me forever, movie!  Despite the conspiracy by the film company that owns the digital rights to you not releasing you on DVD since 2003, I got you!  Sure, I had to go low-fi and buy a VHS copy of you.  Of course, you're not exactly Lawrence of Arabia, so I'm not losing much.  Hell, for all I know, the DVD is a Pan and Scan VHS Master release.  So what is this movie about?  Based loosely on the Dean Koontz novel, it tells the tale of a super-smart dog who teams up with a man to battle an evil mutant.  You're probably saying to yourself 'That's the plot of Watchers.'  Yes, yes it is.  It is also the plot of Watchers 3 and, to a certain extent, the plot of Watchers Reborn.  Mind you, there are some changes.  For example, Watchers has Corey Haim (R.I.P.), while Watchers II has Marc Singer (still alive, but starring in Asylum films).  Watchers III is apparently more of a Predator rip-off and takes place in the jungle, while Watchers Reborn has Mark Hamill in it.  Even so, that dog is always around and the mutant/alien thing is too.  All clear on that?  Good.  Get out your racist stereotype character for my review of... 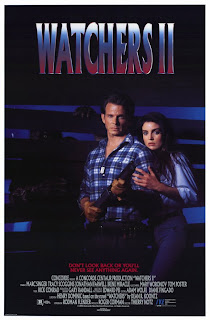 The film begins by showing us a super-secret lab in the middle of nowhere.  One woman (Tracy Scoggins) is doing an experiment with a golden retriever.  The goal: prove that the dog is super-smart.  Unfortunately, the dog does not seem to be getting the hang of it, leading to some mocking from her peers.  To make matters worse, a pair of NSA Agents arrive and start to look around the place.  They are warned to stay out of the basement labs, but that just makes them curious.  This proves their undoing, however, as a monster behind a cage door kills them both.  Bonus point for having the second guy stop and stand with his back to the cage door after just witnessing his partner be killed by something behind it!  The boss at the lab complains to someone over the phone about them sending over NSA people.  He doesn't raise a big fuss over them disappearing, however- odd.  In a separate plot that will sync up soon, a man (Singer) being sent away to the brig for hitting his commanding officer.  Fortunately or unfortunately, some hijinks overnight at the lab have led to the unseen creature escaping, as well as the dog.  The monster takes out the military personnel, while the dog allows him to get free. 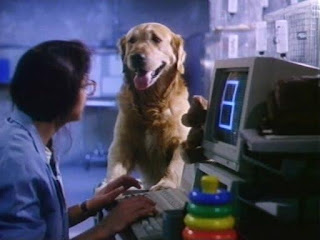 In the aftermath, the man goes back to his ex-wife's house to get back on his feet.  Yeah, I'm sure that she's been just waiting for that.  She goes along with it, however, and sets him on his way.  She is not happy to learn that he's a fugitive, but pretty much accepts his story at face value.  She even covers for him when the military shows up later looking for him.  The guy ends up at a hotel and discovers that the dog is super-smart.  This whole scene is really silly, a fact not aided by Singer's acting.  I love you, Marc, but you've never been that good of an actor!  Through a bit of Simon Says, the dog tells him to call the woman from the laboratory.  She's been bummed out ever since she came to work the next day to find it all burned up- a side effect of the hijinks.  The pair arrive and she's very happy to see the dog.  Marc's character is a little down as he's convinced that he should just turn himself in.  I don't really see the point of this, but whatever.  During all of this, the monster runs loose in town.  It's first victim is Singer's wife, who dies after showing her breasts.  Thanks, I guess.  Next a convenience store worker- who is a Sikh- dies after a really hammy performance.  On top of that, the lead doctor is out looking for the monster... 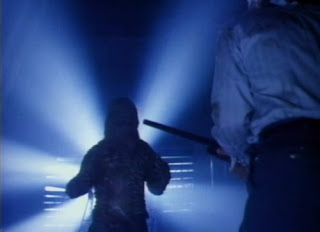 The monster is finally confronted by the doctor and doesn't take his orders too well.  He goes along at first, but that doesn't last.  It may have something to do with you putting a tracking chip it in him, dude!  Singer and the scientist figure out that something freaky is going on, thanks to some information they dig up.  The monster is a creation of the same lab that gave the dog (Einstein) his super-smarts.  Our heroes are lured into a trap by the doctor before the monster turns on him.  Singer confronts the creature, but he at least comes armed.  For all of that build-up, however, he gets slashed on the back and runs away.  Wow, what a letdown.  He manages to escape through the sewer drain.  Regaining his courage, he attempts to track the monster via a device that allows him to home in on the monster's tracking device.  Unfortunately, he discovers that it ditched the thing in the streets.  That means that he's going after the dog and the woman.  They put up a fight, but mostly just run away.  If you want a good laugh, watch the effect of the dog climbing up a vertical ladder!  On the rooftop, all hope seems lost until Singer shows up in the nick of time and shoots the monster.  They leave it to die in peace and walk off.  The End. 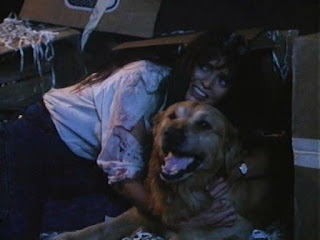 This movie kind of sucks.  The plot has good potential- monster on the loose, military man after him, etc- but wastes it.  Singer's role is awkwardly-placed in the story and doesn't seem to fit.  Why does he get involved?  Oh, it's just because he runs into the dog and meets with the woman.  Is that it?  The dog is the best part of the film, since Singer and Scoggins are not exactly great actors/actresses.  The guy playing the evil doctor shows some good range, but his part is pretty stock.  Why is he evil?  Because he's all about science, of course!  The monster make-up is terrible.  There is no beating around the bush at Mondo Bizarro!  They almost never show you the damn thing, but it is a disappointment when you actually see it.  It looks like they took the Leech Monster suit from The Return of Swamp Thing and retrofitted it.  It's a shame too, because the whole movie is a build-up to this thing being on screen and wreaking havoc.  Oh well, I guess there is always Watchers III and Watchers Reborn to give me different ways to get disappointed. 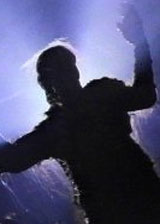 Up next, a film about a pop star and a genre actress who go to Paris.  Unfortunately, they stumble upon a T.C.M. rip-off in the sewers.  Stay tuned...