Japan- what a country.  They make lots and lots of anime (animated films, for you neophytes) and turn many of them into live-action films.  There are some that stand out (Riki-Oh, Death Note 1&2), while many are just weird and obscure (Cutey Honey, Battlefield Baseball).  This 2004 film goes into the latter category.  For the record, I have not seen the original series, so I can't talk about how it's different or reminiscent.  Sorry, fans.  I plan to just talk about this movie as a film- nothing more.  The story involves digging, devil spirits and a bird woman.  Sure- why not?!?  Oh yeah, bodybuilder-turned-bad-shoot-fighter Bob Sapp makes a recurring cameo.  Mind you, this was the same year that he also had a cameo in Izo, so I guess he was just 'big' that year.  The film is full of CG demons and violence, so it can't be too bad- right?  Get out your non-denominational crucifixion for my review of... 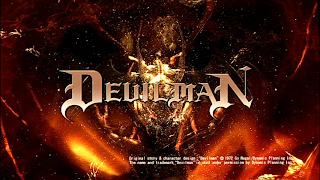 The film begins with two young kids talking about how they will always be friends.  In addition, they talk about how they like monsters and wish that they could turn into them one day.  This is beyond the realms of foreshadowing, guys!  By the way, why does the one kid have gray hair?  Is he related to Steve Martin or something?  In the present day, the kids have grown up to be teenagers.  The dark-haired kid is being threatened by some bullies when another teen warns them not to.  If they don't, he says, the gray-haired kid will hurt them.  He tells the story about a bully who did the same thing and got two fingers chopped off with hedge clippers!  As it turns out, the kid who got The Burning treatment is the one telling the story, so the teens run off.  We also get to meet a young woman who is our hero's love interest and, due to a legal technicality, his sister.  Eww.  Mind you, it's because he was adopted, but the implications are still icky.  With very little character build-up out of the way, the movie jumps right into the main plot.  The gray-haired kid's dad is a scientist whose group inadvertently uncovered floating, demon eggs in the Earth's core during a drilling.  I don't know- just go with it.  They drive to the scene where they get infested by them.  What was your plan exactly?  Our hero can now turn into his normal self (to save on the budget), a prosthesis-covered form (see below) or a fully-CG creation.  Okay then. 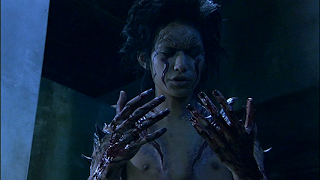 Back at his house, the teen wakes up without much memory of what happened.  He sees feathers on his skylight, so he goes up to the roof and finds...a bird-woman.  This is supposed to be serious?  They fly off back to the science base and turn into their CG forms to fight.  Our hero loses, but gets saved by the appearance of an angel that looks like his friend.  They don't address this for quite a while, so let's move on.  This leads into our first Bob Sapp cameo as he reads the news.  As an American, watching a Japanese film with English subtitles and then seeing a guy speak English with Japanese subtitles is a bit confusing.  Why must all Bob Sapp cameos in Japanese films be confusing?  Basically, there's an outbreak of demon transformation around Japan and it's spreading to the world.  Of course, this is a Japanese film, so we see none of this.  We also get a sub-plot involving the former bully being nice and sensitive.  That amount to nothing when a dragon-looking monster eats him.  He kills the thing, but it gives a speech about how it's not evil first.  Okay.  Chaos erupts in the streets, giving us a second Sapp cameo.  Seriously, the subtitle thing is confusing. 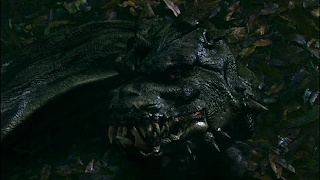 The rest of this movie is simultaneously too long and too brief.  Right around the hour mark, the film gets really preachy with a message about intolerance and not fitting in.  News Flash: the demons are killing people.  Sure, the humans are bad too, but that doesn't make the demons that possess people and mutate them nice!  A mob chases after a female character (who has little to do with the plot) and a kid, killing the hero's 'parents'- and girlfriend- in the process (since they hid them).  Our hero continues to try and get revenge, while also stopping the rampant killings by humans and trying to track down his old friend.  By the way, the friend has been possessed by Satan himself.  In spite of that, our hero is actually the one called Devilman.  Go figure.  Eventually, the two have a face-off that is full of CG and imagery that you would later see in Constantine.  They both fight and manage to mortally-wound each other.  Meanwhile, the girl transforms into a demon with glowing, pink wings and escapes the mob with the kid.  I should also mention that Sapp makes one more cameo, which ends with him turning into a three-headed demon live on the air.  After the big fight, both demon-people die- yes, they kill Satan in a non-Filipino film- and nukes are set off.  In the wake of this, the girl and kid survive to carry on the human race.  Yeah, the world is a nuclear wasteland, but they try to spin it like a happy ending.  That totally works.  The End. 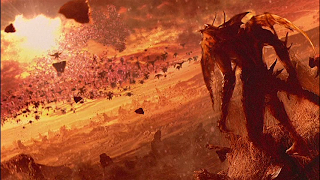 This movie...is also weird as hell.  The plot is simple enough, but eventually gets a bit muddled.  Demons are basically mutants here.  Mind you, the mutant gene doesn't come out of the Earth and turn people into mutants.  Aside from that major difference- plus the whole 'evil' thing, the analogy isn't that bad.  The special effects are good here.  While the CG doesn't beat anything you can say now, it is quite effective.  There are moments with the fully-CG characters that are obviously CG, even if they don't really look bad.  Much like Death Note, it is kind of something that you just except.  If you can accept PS3 graphics for your CG work, then you'll like this film.  It is a bit too long though and the lack of a happy ending is kind of odd.  There are moments when you can see the inherent problem into turning a whole series into one movie.  Yet again, Death Note had the right idea with two films.  Had this been a series of films- one with the demons coming, another with the human war against them and a third with the final battle- I would recommend it higher.  It's not a bad film, but you can see what could have been done to make it great.  Fans of action-packed anime-to-live-action translations will love this though, even if they have no idea what the film is based on.  Take it away, freaky CG form of Bob Sapp. 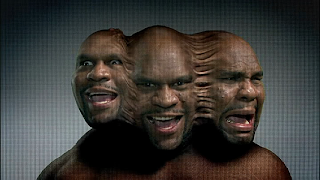 Next up, we return to Instant territory with a weird, foreign film.  Should I expect something normal from Luigi Cozzi?  Stay tuned...

Email ThisBlogThis!Share to TwitterShare to FacebookShare to Pinterest
Labels: Japan