Let's wrap up 2010 the right way- with an obscure and terrible slasher film.  One of the many films released by Canon-Globus in the '80s, this one has a very particular niche.  Of course, this presents a problem.  Halloween is great to watch on the titular day, while Friday the 13th has a chance of the date arriving at least 3-4 times a year.  This movie is all about New Year's Eve- a holiday where people drink and set off fireworks.  Screw that- watch a slasher film!  Yeah, that didn't work.  As a result, the movie became very obscure and doesn't even have a proper DVD release that I can find.  Thanks to Netflix though, I can watch it on my computer.  The plot is about a serial killer taking people out based on a very silly premise.  I'll let you find out in due time.  Get out your random pantyhose masks for my review of... 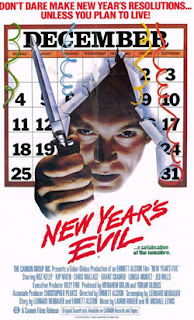 The film begins by setting up our scenario.  Basically, it's New Year's Eve and a woman is hosting a musical show to celebrate.  The woman is wearing way too much rouge, which was I guess a look.  If French whore was a fad, I'd be shocked though.  She's uptight about the whole situation going smoothly, sending her assistant off to retrieve an item.  Unfortunately, the woman is stalked and killed by a mysterious assailant.  Since they don't know about the situation, the show must go on!  Early on, however, a caller appears and calls himself 'Evil.'  Yes, the title is not just a pun- it's a forced one.  He explains his plan: he's going to kill someone at the strike of Midnight for every time zone.  Really?  That's silly.  We don't have to wait long for the first one as he disguises himself as a doctor.  He romances a nurse while the radio plays, only to stab her to death when they announce that it's midnight.  That's cold, dude!  While this is going on, the host tries to get the cops to listen, but they blow her off.  When they find the body and the guy calls again, they finally believe him.  Oops- too late. 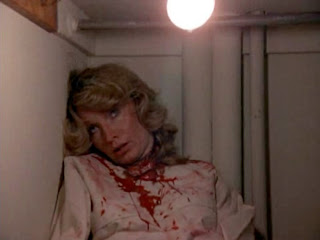 Our next victims are a pair of women at a party.  Our killer puts on a fake mustache and charms them with a tale of going to a party at Erik Estrada's house.  Yes, this movie is not dated at all.  He has to improvise, since he hadn't planned on taking two of them.  He lures one of them away from the car and chokes the other with a plastic bag full of marijuana.  Drugs kill!  He kills the other one by leading her to a dumpster and killing her.  The point of that: to get a trailer shot of him standing in the light of a flame.  Hurray?  He taunts the police with a call and they stumble across the bodies.  Now this shit is real!  He sets up for his next kill to take place at the third Midnight.  It's so nice of the radio to constantly announce that for him, huh?  You think that they would stop after the first two kills, but no.  God forbid logic intervene here!  His next kill: a nun.  Why?  The plan is foiled, however, as he crashes into a biker.  The gang chases him, forcing him to flee to a drive-in theater.  Incidentally, isn't it a bad idea to market around people being killed at Drive-Ins, since they were still prevalent.  I'm just saying.  At some point during all of this, the son of our host sits in a room and puts on pantyhose on his head.  I don't know why this happens. 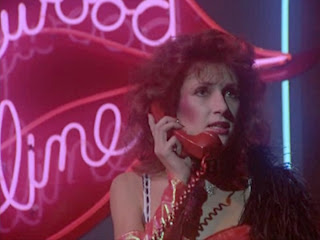 Our killer is not good at improvising, it seems.  He drives off with a girl who was just trying to get naughty in the car, but she manages to escape when the police show up.  With that 'hour' wasted, he goes for the final one: the host.  Putting on a track suit and a George Costanza mask, he shows up to...talk to his wife.  Yeah, the movie held that plot point close to their chest, didn't they?!?  He sets her up to die by rigging an elevator to knock her out (don't ask) and tying her to the bottom.  I don't quite this method of killing, but whatever.  Why does he want to kill her?  The son got an acting part without her, but she didn't make time to talk to him.  That and he feels emasculated by her.  That's it.  The police and the others finally figure out what's going on and a gunfight ensues.  Yes, a gunfight in a slasher film- how out of place!  In the end, he gets chased up to the roof and puts his mask back on.  He does a nice swan dive in an effect that only works because you can drop a dummy off of a roof with the mask on without people noticing the difference.  In the aftermath, the son is allowed to pick up the mask.  He kills the EMT driving the ambulance and drives the mother off, setting up...a sequel, I guess.  The End. 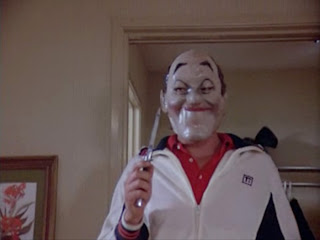 This movie sucks!  The plot is standard slasher fare, just with holiday elements thrown in for effect.  Never mind that the 'killer calling into places' plot had been done a few times before even this one.  When did that stranger call again?  The kills are alright, but there a very few of them for this kind of movie.  Of course, this is due to the tacked-on theme of the murders.  Incidentally, does the lady from the beginning being killed not count against his theme?  Furthermore, does the biker at the drive-in count as that hour's kill?  When your silly and simple plot has holes, what does that say?  The movie is also padded to the brim with filler.  For example, we get a number of musical moments from a band on the show.  They add nothing.  There is also a bunch of random scenes like people in an asylum celebrating the holiday.  What do they add?  Unfortunately, this movie wastes a good idea with bad execution.  As one reviewer I read made note of, Canon-Globus had a great track record with action films, but a shitty one with horror films.  This is not different. 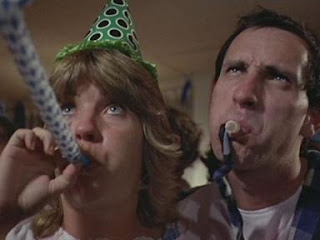 Next up, we start the new year off right with an Asylum film.  Get out your ass to Mars, people!  Stay tuned...

Email ThisBlogThis!Share to TwitterShare to FacebookShare to Pinterest
Labels: holiday