Video Bava: Dinner with a Vampire

I'm almost done.  I'm almost done.  It helps when I say that a couple of times.  For those of you who may be new, here's the score.  Lamberto Bava made a series of horror films exclusively for a show called Brivido Giallo in 1987.  Despite him being the man behind Demons and Demons II- not to mention the underrated A Blade in the Dark- Bava did nothing good here.  First there was The Ogre, a dull horror film that was falsely made into a sequel to Demons.  Next there was today's film- Dinner With A Vampire.  I'll get into that one further down.  Third for the show was Until Death (aka Changeling 2), a horror-styled version of The Postman Always Rings Twice.  Unfortunately, the acting, writing and overall production issues made it suffer.  Finally, there was Graveyard Disturbance, a movie with a great premise, some actual monsters...but terrible, terrible pacing, as well as a disappointing finale.  After all of those failures- some worse than others, mind you- my hopes were not high for Dinner.  The film does have one thing going for it: George Hilton.  While not a major name to most people, Hilton has starred in such films as All the Colors of the Dark, Blade of the Ripper, The Case of the Scorpion's Tail and Atlantis Interceptors.  While those are not all great- or good- movies, the guy was also a treat in them.  Can he make this one finally work for me?  Get out your non-descript film parodies for my review of... 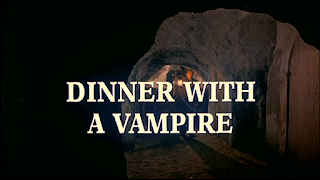 The film begins with some cheesiness involving some people breaking into a castle and opening up a crypt.  This has a very old-school feel to it, complete with fake, film grain.  This is good...so they have to screw it up.  After all of this, we cut to a casting session for a new film.  You're making me remember Halloween: Resurrection, so I think that qualifies as 'screwing it up.'  The group consists of a wannabe dancer, a tough guy, a sarcastic guy and a Final Girl.  Yeah, that's pretty much her only trait.  They are taken to a castle where they meet a butler who's a dead-ringer for Young Frankenstein's Igor (it's pronounced Eye-gor).  Is this intentional?  There's really no jokes made with the character, but it also can't be a coincidence...can it?  Stop confusing me this early, movie!  The group is sat down in a wide-open room and allowed to watch a movie that appears to be by the same person we saw in the opening.  This film is in black-and-white, so I'm a little unclear on the timeline here.  Plus, was this film released?  Yet another thing that could easily be cleared up and make the film less confusing.  On the plus side, the film-within-a-film (yes, this is a Lamberto Bava film) features the vampire pulling out a man's heart via telekinesis.  Time to start working on the THIRD Top 12 Strangest Vampire Powers list now... 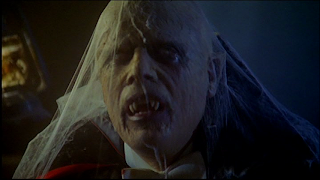 Unfortunately, the film reel has a roll-out before the characters can explain how to kill the vampire.  Gee, this isn't a pretty obvious plot-point, huh?  They meet their host (Hilton) who is a film director casting them in his next movie.  Of course, the title kind of gives away the twist.  Yes, he's a vampire.  He's an odd vampire though.  His goal: to be killed.  Much like Talladega Nights' Jean Girard, he wants to be defeated, but he won't just lay down.  It seems like an odd stance to take when you're suicidal, but whatever.  Our heroes do the only natural thing: run like hell.  Unfortunately, this plan has its flaws, since the guy owns the castle and has lived there for years, thus knowing all of the shortcuts.  It's actually kind of funny when they run into a room, only to find him sitting there and reading the newspaper.  Side note: why does he wear glasses?  I get that it's part of the joke, but I assume that there's no reason for the guy to need them, right?  I suppose that I'm the only one who would question this, so I'll move on.  The fleeing proves even less effective when the vampire shows off his 'heart removal power' in person, killing one of the lesser characters.  Oh no, not that guy whose name I have completely forgotten. 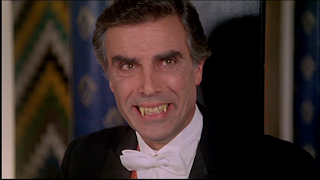 Our heroes find out that this vampire is really hard to kill!  They try all of the usual stuff- garlic, crosses, etc- but it does no good.  One of them even runs a stake through the man's heart, leading him to bleed green blood and...not die.  That's what you get for being an Atheist!    Actually, that's the crux of this movie: vampires are real, but vampire rules don't apply.  I don't really buy into it, but it's a bit too late to question it.  To add to the drama, the not-Igor is sent down to the basement to unleash the rest of the vampires.  These are apparently the other people he's brought there in the past to do the same job.  Now there's another question: how does he not get caught?  Before I can dwell on this, our heroes finally figure out how to kill the vampire.  Do you want to guess how?  Go on- guess!  As it turns out, you have to destroy the film that was shot as he was revived in the beginning of the film.  I'll start work on another Top 12 Weirdest Vampire Rules List too now, I suppose!  In the end, they manage to do so, causing the guy to age via bad make-up before finally exploding into fire (why?) and melting (why?!?).  As they leave, they are offered a ride by a man who is also played by George Hilton- so they run instead.  The End. 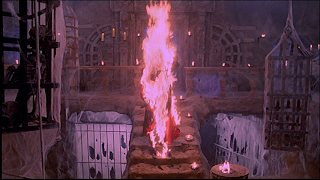 This movie kind of sucks, although not as much as the others.  The plot has a certain charm to it, aided by its simplicity.  Of course, they muck it up a bit with the jumping from the movie-within-a-movie to the actual film and back again.  Please just pick one, guys.  That goes for all of you out there, not just Bava.  Of course, the same day that I write this, one of my Christmas Week films does just that.  That's a discussion for another day.  Does the rewrite of vampire lore work for this movie?  Yes and no.  Yes, it is a unique twist, as they set up the obvious events and then flip the script.  In addition, the movie has a somewhat lighter tone, so I can accept this.  Mind you, the film also has two scenes of people getting their hearts pulled out and a vampire melting into bloody goo, so it's a trade-off.  On the other side, the rewrite of the vampire rules is a bit lazy.  We don't want to play by the rules, so we'll just make shit up.  It's too hard to be original within the confines of a lore, so screw it!  The tone and pacing of this movie are a bit uneven, which makes me hesitant to recommend it.  It's not really an all-out comedy or a horror film.  It's one of those movies that wants to have it's cake and eat it too.  It's a shame that it's not better and it just proves the inherent flaw in the Lamberto Bava Made-For-TV Quadrilogy.  Oh well, there's always Demons 5: Black Sunday...assuming that I can find it. 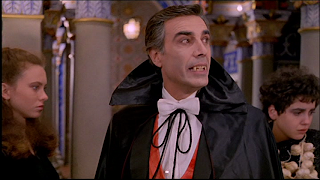 Next up, an obscure 1999 horror film that just so happens to feature a man who would be in a less-obscure 2000 horror film.  Oh yeah, a mummy fights Bruce Lee too.  Stay tuned...