Jamie Lee Curtis was a busy lady in the '80s.  Thanks to a working relationship with John Carpenter and a hit film or two under her belt, she had a lot of offers.  Obviously, her most famous film is going to be Halloween.  Less people realize that she was in Prom Night, but it's still a pretty common fact.  What's even less common is the she also starred in a third, major slasher film: Terror Train.  Yes, this film exists too.  I remember this film from just over one year ago when it made one of the early versions of the segment that would become Lost in Translation.  For you newer readers, check it out here.  The film is about a bunch of med students being stuck on a train with a killer.  Oh, that explains the terror.  Make note that this plot is fairly-similar to a film that would show up a year later.  Get out your Uncle Sam outfit for my review of... 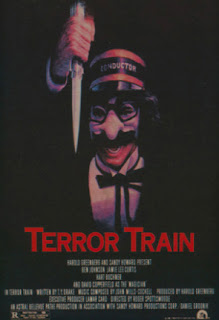 The film begins at a college campus where the students are having a party by the campfire.  As part of some initiation into a sorority, one of the newbies is sent up to get laid.  Damn your horrific hazing!  Seriously though, this is obviously a set-up and it involves Jamie Lee Curtis.  They set up the guy to meet her, only to lay down next to a cadaver.  He spins around in the drapes and screams as we cut to the title card.  We jump ahead about three years to our heroes now as Seniors and...looking the same.  I'm not expecting a lot here, but do something different!  Anyhow, Curtis is still kind of mad at the ring leader for that stunt we saw in the beginning.  Her outrage feels odd here, as it seems that she was holding it for years and only now brought it up.  It's been so damn long, but this has never occurred to her.  As a bonus, wait until the Third Act to see this logic really fail!  The group is going on a train to celebrate the dawn of the new year.  No, I don't know why.  Skipping past some character back-story that amounts to nothing but filler, the group all goes on board.  Unfortunately, they don't realize that a killer has slipped on board and is disguised as one of their friends.  By the way, it's also a costume party- right. 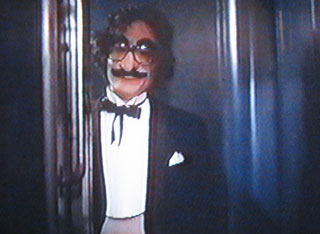 Once the set-up has been put in place, we get a lot of character back-story.  Well, that and magic.  Who's on hand to dispense the parlor tricks?  Why it's David freaking Copperfield!  Yes, he starred in one movie- this one.  He does some simple tricks and they look good, but this is a movie- who's to say how they edited it?  More importantly, the killer has found and taken out another member of the people involved in the prank- a black guy dressed up like a Sleestak.  Words fail me, gentlemen.  We get some back-story establishing that the relationship between Curtis and her boyfriend is strained due to his friendship with the man behind the prank.  Again- this feels like something fresh, not something that's been lingering for three years!  Eventually, the conductor stumbles across the body of the 'Sleestak' guy and tells his co-worker.  He doesn't tell the passengers because...no good reason.  The other guy eventually checks out the scene, only to discover a lack of blood and the guy in the suit being alive.  How did he do that?  Where is the other body?  If you want answers to either questions, look at a different movie!  Now our killer is dressed like a lizard, so the real fun can begin. 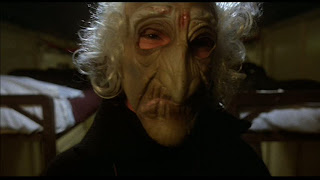 After the death of Curtis' boyfriend- the stabbing apparently happened off-screen- and the girlfriend of the ring leader, the conductor finally stops the train.  It's there that Curtis explains something that should have come up in the last three years: the guy they tricked went crazy and killed someone!  Yeah, that's relevant information, you bitch!  The ring leader and Curtis go back into the train & figure out that the killer is the magician.  Damn you, Copperfield- first the Statue of Liberty and now this!  Being the prick that he is, the ring leader locks Curtis out of the room when he thinks the killer is coming.  It turns out to be the Conductor and the killer takes out the ring leader.  Back outside, Curtis explains that she knows who the killer is and needs to see the Conductor.  Um...you were just with him!  They get the train moving again and guard Curtis in her room- which fails.  She gets chased around while the others look for the man.  She eventually stabs the killer in the eye, which feels awfully-similar to another Jamie Lee Curtis film.  Ultimately, she tosses the killer off.  The End.
*****
No, just kidding.  Instead of that logical ending, we get a continued one.  Curtis wanders around for no reason and discovers the truth about the killer's identity.  It wasn't Copperfield- drat!- but was actually his Assistant, who was dressed in drag and disguised.  So nobody noticed the blond in the cocktail dress wandering around?  Oh yeah- the eye wound is not there either.  Anyhow, the Conductor arrives to shovel the man to death Day of Defeat-style.  The End...for real. 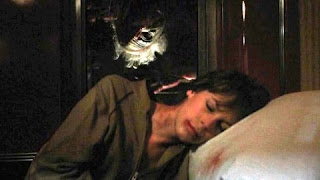 This movie...is decent.  The plot is simple enough, but gets bogged down a bit.  Curtis' character knows that the guy went crazy and knows that he has a grudge against them, but never feels like sharing that information for three years!  I know, I know- I can't get past that.  Seriously though, the drama only works because of this plot contrivance, so it's important.  Getting past that, the film's other plot contrivances bother me.  How does the killer sneak the bodies out?  Where does he hide them?  Who is the magician, if he's not the killer?  Nobody figured out that it was a dude the whole time, not even the magician himself?  If you can ignore that stuff, it's a slasher film built more around suspense than gore, a sign of when it was made.  I can't tell you how this ranks in regards to Prom Night, as I haven't seen either version.  I can tell you that it's not as awesome as Prom Night II though, if that helps.  The film is good for what it is, even if I can't get past a couple major hurdles.  You have until Midnight to watch this for free on Netflix, so get to it. 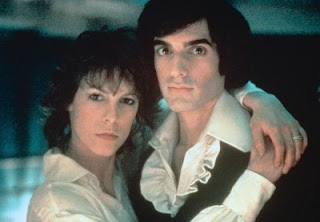 Next up, our final Year End review is also a slasher film.  This one is also obscure and contrived-sounding- hurray.  Stay tuned...