Delayed Reviews: Once Upon A Girl 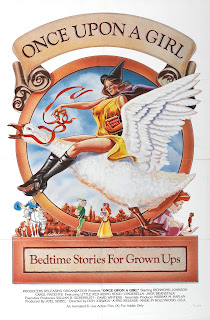 The film begins in a nice, small town wrought with controversy.  What could cause such a fuss?  Why it's the trial of Mother Goose, of course.  I'll let that one sink in for a minute.  Ready to continue?  Okay.  Ms. Goose is on trail for indecency, on account of her telling naughty stories all around town.  They bring her into the courtroom and she is...a man in drag.  Yeah, 'Otis' plays 'Mother Goose' here.  It's funny, apparently.  To defend 'herself,' 'she' tells some of her tales.  How would that help in any...aw, screw it! 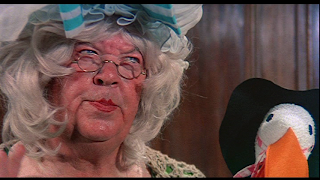 The animation is kind of like Disney film, but about sex.  We see the tale of Cinderella- only with sex.  It's what it sounds like. 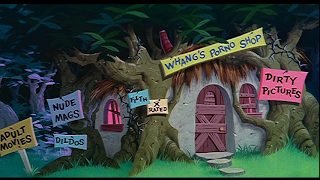 The real 'meat' (pun fully intended) of the story is Jack & the Beanstalk  Jack humps a tree while a frog sits on his head.  I'd ask the logic of this, but...do I need to? 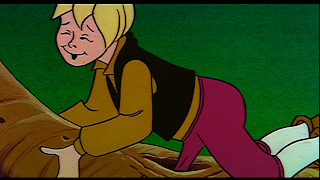 Jack's frog falls into a nearby woman's dress, which apparently creates a sensation that she likes.  Try to get this face out of your mind now, bitches! 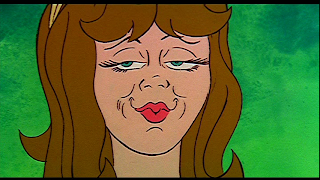 He climbs up the titular stalk and runs into more 'sexy' situations.  First, the talking harp is a lady, so they make whoopie.  He meets up with the giant's wife next, who uses him for 'downtown fun.'  The husband comes home, requiring him to hide.  Guess where he hides- I dare you!  Eventually, the guy figures out that our hero is there- do you have to ask how?- and they have a laugh.  Good for you. 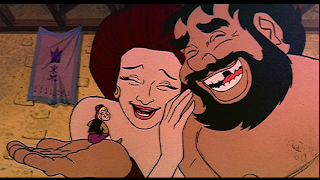 Jack has a good laugh remembering all of this.  Well, that and one other reaction... 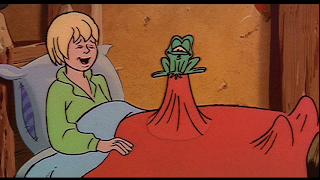 Part of my soul just died.  Here's what killed the rest of it. 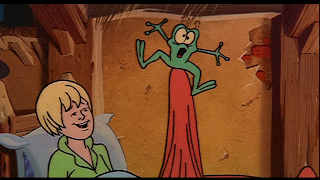 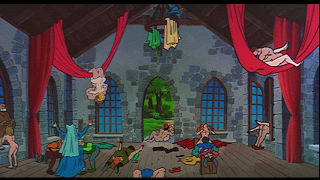 This movie sucks- even in recollection!  The plot is an excuse to show a bunch of dirty cartoons.  Aside from that stupidity, it's not even funny.  A guy in a dress- that's all you've got?  The cartoons themselves are not good.  The voice-acting is bad, the animation is iffy and they don't even commit to the real sex.  It's like I want to see a Rated X cartoon with realistic sex or anything, but that's clearly what they were going for.  They actually end up with cartoons that have enough sex to be dirty, but not enough sex to really satisfy their point. Never mind that so many of them are full of freaky stuff like Jack making out with the talking harp.  If that works for you, more power to you!  As for me, the movie was just 'icky.'  I'm no prude, but I'm also not into this.  Like most Something Weird films, I get why they felt the need to release it, but I also don't care to see it more than once. 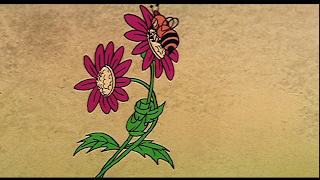 Next up, a Thai action film that also features giant, CG monsters.  Yeah, they can make Syfy Channel films too.  Stay tuned...
Posted by Alec Pridgen at 6:32 PM