Instant Rare Flix Trash: The Man Who Fell To Earth

Why remake a classic?  This question has lingered about for many years and nobody can really answer it.  Some say it's to update the material for a new audience, while others says 'shut up- I want to make money!'  As I write this, we are about to see the release of the Coen Brothers' remake of True Grit.  I guess it's fitting then that I review the 1987 Made-For-TV remake of The Man Who Fell To Earth.  It's amazing when my own convenient logic helps me out.  What you need to know is this: no Bowie.  There's one off-hand reference to him in the movie (he comments once that humans aren't 'dancing in the streets'), but that's it.  Instead, the movie stars...um, some guy I don't know or care about.  The film was a back-door pilot for a series, which never saw the light of day.  I would ask why they bothered, given that we had already tried to turn Starman into a TV series and had it fail, but whatever.  Get out your gem ex machina for my review of...

The film begins with a meteor crashing into the Earth.  Fun fact: the explosion effect was the same one used in Trancers 6.  Of course, that film was made in 2002, while this one was made in 1987.  Ouch.  It actually turns out to be a space ship carrying our hero.  His other comrades die, so he buries them and attempts to do a sad exclamation.  Yeah, you're about as convincing as Tommy Wiseau.  He instantly changes clothes and throws away his space suit, thus robbing the film of any iconic imagery.  Smooth move, guys.  He hitches a ride with a trucker, but she passes out and crashes.  Using his magic gem, he heals her and drives the rest of the way.  He ends up in a diner where he's waited on by Annie Potts.  Oh, how you had to wait until they made Ghostbusters!  He eats about thirty different meals, which ends up costing him about $32.  I hate you, inflation!  He trades her a bunch of diamonds for his meal and her car, thus ending her minuscule plot thread about going to Hawaii.  Wow, that was pointless.  He goes to the city and basically sells a trio of unused patents to fund 'his research project.'  Yeah, just throw those out there.  That worked out really well in Star Wreck! 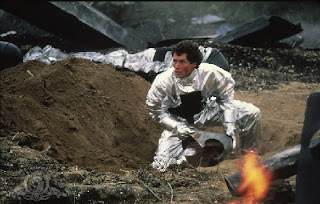 Despite his earlier statement about only wanting to work with one guy, he randomly goes downstairs when a guy forgets his hat.  He runs into a single mother (Beverly D'Angelo) and her punk rock son.  He makes friends with her and intercedes to help her son.  Mind you, the son is in danger because he was running from our hero, but whatever.  While waiting for his money to come, he goes out to a party with her.  He doesn't get drunk on 12 beers, but tomato juice does the trick.  He starts dancing like an idiot and...yeah, I'm done. 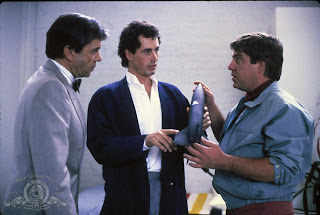 The part of this movie I could watch sucks!  The plot is stupid and barely works.  I get that it's a remake of a book and a movie, but the plot feels cliche by this point.  As I mentioned earlier, Starman was both a film and show by this point.  You guys were just retreading that movie...badly.  The film suffers from a forced injection of bad comedy.  The guy even has a catchphrase: 'I don't have any money, so there is no point in mugging me.'  Laughing yet?  They use it three times in ten minutes, so you'd better!  The acting is...not so good.  Our hero is just so terrible that it hurts.  There's a line between being dull and being 'alien.'  Guess which side of the line he ends up on.  He's not funny or someone that I can relate to.  Were you really going to build a show around this idiot?  This movie is not available on disc anywhere, but you can watch it streaming via MGM's site (see the logo on the above picture) or Netflix.  As much as I'm sure the Bowie film can bore me with it's obsession with minute details, I'd still rather watch that.  If you really love obscure films, this is one of them. 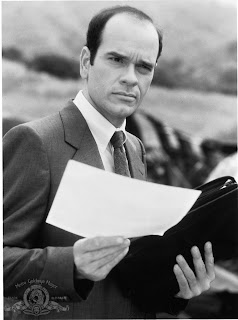 Next up, I bring you another Review in Pictures.  This time, it's a crazy Japanese film with robots, geishas and vomiting robots.  Stay tuned...
Posted by Alec Pridgen at 11:20 AM