Eli Roth can suck it!  For those of you who don't know me or my writing that well, I'm not a fan of Eli Roth.  In fact, his appearance was one of the few real complaints I had about Piranha 3-D.  He got a lot of his heat from me for a pretentious list he gave out in an interview for a website (I think it was Rotten Tomatoes, but I forget).  The topic: 5 Horror Films That Nobody Has Seen.  While I can say that I've seen a lot of films that few else probably have (shit like Star Wreck, for example), I don't brag about it or make a point of 'how cool I am.'  Besides, I wish I hadn't seen most of them myself!  The point of mentioning this list is, as you may have guessed, this film is on it.  Looking back at the movie though, it's easy to see why Roth likes it- he's pretty much been ripping it off for years.  The film involves a pair of American exchange students terrorized and molested by crazed locals.  Other than being on a train or other little details like that, how different is that from Hostel?  The reason I'm reviewing it today- it's set around Christmas.  While it wasn't jumping on the 'Holiday Horror Bandwagon' per se, it's plot is set around that festive holiday.  Is it a lost Silent Night, Deadly Night or just another Christmas Evil?  Get out your barely-hidden blackmail for my review of... 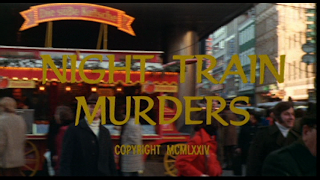 The movie begins with possibly the most obnoxious opening song this side of Dracula Rising.  It juxtaposes this with one important credit- Music by Ennio Morricone.  Don't worry- the rest is better.  The point of this is to show our two main villains running through the crowd and causing mayhem.  To fulfill the Christmas quota, the pair rob a 'Santa' taking donations- in front of a bunch of people no less.  Subtle, guys!  In a separate plot that will eventually join up, two co-eds are going home for Christmas break.  I don't see how this will possibly connect to the other plot!  The movie pads out the run-time a bit with a sub-plot involving the dad at home being a control freak, as well as a scene where the parents waiting at the arrival city go out shopping for a bike.  Is it important that they're buying a bike this year when they said that they wouldn't last year?  No.  As the train prepares to leave, our local thugs attack a random woman and run into the train station.  They jump onto the departing train, which is not noticed by anyone.  On the plus side, we have a plot now! 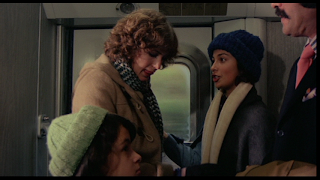 Unlike the train, this movie still takes a little while to get going.  We get a number of quick scenes to set up the characters on the train, but many of them amount to nothing.  What's the point of the Bishop with a nervous twitch, seeing how he only has one other cameo in the film?  Oh right- there is none!  The important one is a woman on the train who accidentally drops a picture from her book.  That picture is of her living up to the girl from Chasing Amy's nickname.  I'll let you Kevin Smith fans in on the joke- tell the rest.  She ends up running into one of the two thugs in the bathroom on the train, where he proceeds to molest her.  It's okay though, since she gets into it, proceeding to have a five-minute long (roughly) sex scene with the guy, all while showing zero skin.  Your actress will agree to do a few of these scenes, but dresses more prudish than Diane Keaton. Logic?  Our heroines stand outside the door and see no problem with this, since the lady is moaning.  You're terrible people!  Through a series of events, they end up trapped in a room with the woman and the two thugs.  Due to her being a slut and her rape/sex scene, the woman is now on the thug's side.  That's...random. 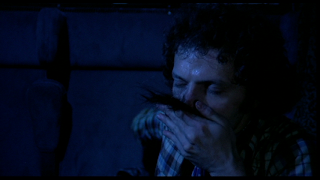 What follows is a long bit of the girls being threatened and molested.  If you want to see where 'Torture Porn' got its origins, this is a good place to look.  At one point, an older man comes by...and just stares at the sexual activity.  He's eventually invited in, has sex with the one girl and leaves.  The point of this: to have him call the cops later...which amounts to nothing.  Eventually, the one girl is stabbed to death What Have You Done to Solange? style, while the other runs...without her pants on.  She jumps, but hits some rocks and dies.  The criminals freak out, but regain their composure.  At the stop, the doctor/father character is called to help heal a wound on the woman's leg and ends up inviting them home.  The news eventually breaks about the girls' deaths and they figure out the one man is responsible, due to him wearing a tie bought for the dad.  He meets a violent and bloody end after trying to shoot up.  Speaking of shooting, the dad chases the other guy with a gun.  The wife begs him to stop, but he kills the man anyways.  Meanwhile, the real guilty party (the woman) just sort of stands there.  The End. 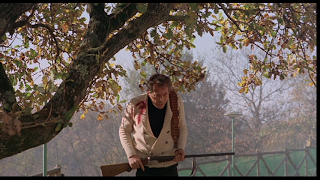 This movie sucks and you suck too, Roth!  The plot is as basic as can be, which is why they try to focus on everything but it.  Random characters, filler sub-plots and distractions abound.  For example, during the long section where the girls are trapped in the room, we not only cut to the dinner party held by their parents, but we also get to see them bicker before hand.  I can excuse the former- as it is used for a bit of forced irony- but not the latter.  Again- why do we have to see the parents go buy bikes and even get back-story on how this is a new thing?  The actual story on the train is so brief that they pad the lead-in to it, the events surrounding it and even the ending.  This movie has more excess accessories than Imelda Marcos!  We're skipping the obvious too- this is a Last House on the Left rip-off.  Made about three years after Craven's film, the movie was even marketed in the U.S. at some point as both Last House- Part II, Second House on the Left, New House on the Left and The New House on the Left.  We get it, American distributors!  As far as being a Christmas film, there's no snow and Santa only makes a cameo in the beginning- despite another alternate title being Xmas Massacre!  Beyond all of that, here's my biggest- and most semantical- gripe: there's only one murder on the night train.  The girl jumping to her death doesn't really count.  Everything about you is a lie, so feel free to return to obscurity. 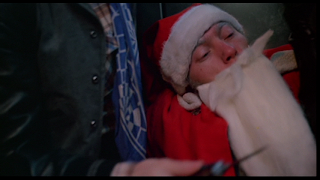 Next up, I cover a movie that has never, ever been released on DVD.  It involves a little monster, Christmas and...'Grizzly Adams.'  Stay tuned...