Does the name Skylab ring a bell?  For people my age or younger, the answer is probably 'no.'  Basically, it was a precursor to the Mir- which I assume you also know about.  Well, it's unfortunately more famous for falling out of orbit and being destroyed.  Sorry, Skylab.  Naturally, this event led to a horror film being made.  Who's really surprised?  The film is known as The Falling.  Oh wait, it's known as Mutant II.  Did I say that?  Because I meant Alien Predators.  Yeah, this movie has more titles than your average British Monarch!  Incidentally, it's really hard to find pictures of a movie when it has more than two titles- I'm just saying.  This movie was shot in 1984, but was stuck in film limbo for three years.  What changed things?  The releases of both Aliens and Predator.  Yeah, that explains things.  The film tells the tale of three young people touring Spain when Skylab crashes.  An alien specimen gets out leading to an alien contamination.  Not to be confused with the film Alien Contamination, mind you.  This obscure film has no video release that I can find, but it is on Netflix Instant Viewing until 2013.  Is it worth seeking out?  Get out your dune buggy for my review of... 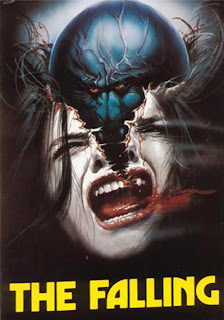 The film begins with a bit of silly narration about Skylab crashing in Spain.  This big event is so serious that it only merits mention here.  Why show it when you can...um, narrate about it?  We jump to our heroes driving around in an RV.  Why are they in Spain?  It has something to do with a race there, but it's so unimportant that we can just skip it.  The group consists of a dorky guy, a tough guy and a girl.  Sadly, there is no pizza place involved here.  In the film's other plot that will eventually link up, a scientist meets up with a man in a diner.  He takes him back to his hotel room and shows him a sample.  Of course, by a sample I mean 'a mutated body whose head explodes.'  This all has to do with sample material from the Sklyab wreck.  I would ask how that stuff survived the crash, but the movie doesn't, so I guess I should just fall in line.  The group banter for a bit before going into town.  They go to the same diner from before where they are greeted by a woman whose hair looks like orange cotton candy.  She returns a moment later with a nosebleed and the inability to talk.  This is the extent of how most people look when infected, so get used to it.  No real drama so far, but I'm sure that will change. 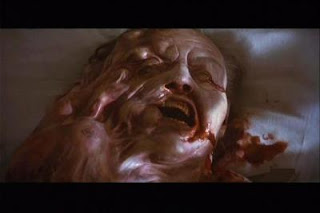 A bit later into the trip and stuff happens- hurray!  Our heroine is out for supplies when she wanders into a store full of possessed people.  She leaves, but is stopped by a man in a clown mask.  Why was he in that exactly?  The possession just makes you bleed from your nose and stare, not dress up like that!  The real villain here is the truck driven by a guy that we never see.  Hmm, maybe the release of Maximum Overdrive helped get this movie out too.  She manages to escape the truck after it accidentally runs over the clown guy.  This is an oddly-easy thing to do.  It just sort of stops chasing her and she returns to the RV.  Our heroes also meet up with another family that is in an RV next to them.  Gee, you aren't here just to die.  I should also mention that this movie showed it's budgetary issues earlier.  In the Diner scene, the returning dork tells about a freaky scene that he experienced.  Yeah, you couldn't show that for what reason?  Eventually, the two plots connect when our heroine goes into town after a fight, only to be grabbed by the scientist.  After his ally got infected, he killed him and fled.  Some actual aliens would be nice about now... 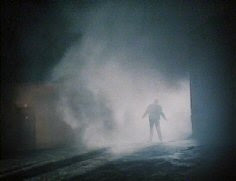 So yeah, the alien specimens discovered and placed on Skylab infected everyone.  Thankfully, the scientist called in a napalm strike to end the threat.  Of course, now they have to get the hell out of there!  The trip out involves one of our heroes playing 'chicken' with the truck and winning- for the time anyways.  The group nearly gets out of town before the scientist begins to turn.  He tells the others to leave as he stands still for the truck to run him over.  It chases out our heroes, who crash through a barricade just in time to escape the napalm blast.  In the Epilogue, our heroes stop for gas when the worker shows signs of possession.  His face explodes and out pops the first real alien of the film.  Took you long enough, jerk!  It's...a jerky-moving, spider puppet covered in blood.  Our heroes manage to rev out of the area and run it over.  Unfortunately, the dorky guy turns as the heroes all die via ADR during a static shot of the RV driving away.  The End. 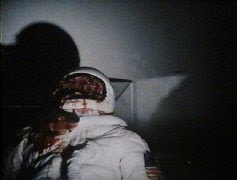 This movie...is not good.  The plot is silly- plain and simple.  Aliens escape from the wreck of Skylab to terrorize a small, Spanish village.  You'd think that I was making this up if I didn't have an actual film to talk about.  Seriously, who thinks of this stuff?  Then again, the plot isn't that different from the plot of Species 2, a film that isn't good either.  Unlike that film, this movie just has implied terror and nosebleeds.  To make up for it, they throw in random gore and blood.  That helps, I suppose, but the movie is still not great.  I was seriously hoping for some wacky shit to write about...but it's not here.  You mostly just get the group trying to make small talk in between people finding dead bodies.  They do love jump scares though.  Unfortunately, this is another case of good premise, but bad execution.  Maybe these things stay buried for a reason.  Although, I do love that hair... 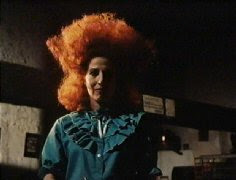 Next up, I cover a movie that sounds like something you should really care about.  Is this is a lost gem or something that should have stayed buried?  Stay tuned...
Posted by Alec Pridgen at 11:18 PM