Slasher films and the 1980s go hand-in-hand.  They're more attached to each other than the freaky-haired guy from Basket Case.  With so many of them, we were bound to have several become pretty obscure.  That's the case with today's film: Open House.  The title just screams 'horror' doesn't it?  They could have at least put 'blood' in the title or something.  Does the name My Bloody Valentine ring a bell?  Of course, if Cardiac Arrest can be a comedy and Yo-Yo Girl Cop can be a drama, I guess anything goes!  As you may have guessed, this film deals with real estate and house buying.  Kind of an ironic time in U.S. History to be talking about this, huh?  With that bit of social commentary out of the way, let's jump right into the movie.  Get out your vaguely-designed axes for my review of... 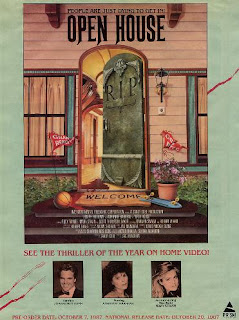 In the Prologue, a woman seeks help from a radio psychiatrist.  When that fails, she commits suicide whilst on the phone.  This dramatic and traumatic event is only referenced twice and part of a plot thread that goes nowhere.  Happy now?  The film proper begins with a woman leading a couple around a new house to sell.  She tries to cover for a spill on the floor (apparently a key plot point for later), but sells the house anyways.  She also mixes up Japanese words and phrases.  That's supposed to be funny because...um, racism?  She goes into the bathroom, only to discover a body in the shower.  The police investigate, only to disappear from the film for the next twenty minutes or so.  The real plot focuses on the radio therapist and his girlfriend (played by Adrianne Barbeau).  So there are two good things about the movie, at least.  She's a real estate agent, which is normally a good thing.  However, a rash of murders begin to occur where agents are killed.  I wonder if the strange caller on the show is related to all of this... 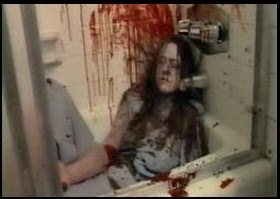 You all know why we watch these films right?  The kills.  The movie has...some odd ones.  One woman is tied up to a post, has pieces of metal poked into her and is shocked to death.  This kind of takes a bullet to Mythbusters, huh?  One couple is killed early on by being chased into a room.  A couple of things to note.  First, the man loses two fingers when the door is closed on them.  Yeah, I cry 'bullshit' on that one.  That or people in the 1980s turned battle-axes into doors!  Secondly, the pair breath a sigh of relief when the killer seems to have given up.  This lasts three seconds as he bursts in through the other door.  Okay, you guys can go out the door you originally came in through.  Oops- too late.  Now you're both dead...you idiots.  One woman is killed in possibly the laziest manner.  When the guy who was with her (as part of the Buddy System) is called away, she goes inside.  A moment later, we see her hanging in the window.  Your death was so unimportant that we just kind of fast-forwarded to it.  Hey, I'm supposed to do that, movie- not you!

So what kind of mystery does this movie have going?  Well, it's all about who the killer is.  Could it be the crazed listener?  Maybe it's a random guy who calls the show and calls our hero a 'liberal pussy.'  It could even be the creepy real estate guy who threatened Barbeau.  Oh wait- that guy just got decapitated (off-screen).  So yeah, it's the caller.  Who is he?  Well, after he kidnaps Barbeau (off-screen), we finally found out why.  Is he the brother of the girl who died in the Prologue?  Nope.  He's just a crazy, homeless person.  Remember the spill in the house?  It was from him.  Yeah, he was apparently living in the empty house for a year until the lady tried to sell it.  Naturally, he killed her and became a serial killer who focuses on female real estate agents.  He's upset when our hero didn't call the cops, but ends up being shot by...the police.  This all ties into a stupid plot point where Barbeau calls into the show under an alias...but everyone knows it.  The cop shoots our killer right through the forehead...but he lives for one last fight.  No, really.  He dies...for real after falling a short distance.  The End.

This movie kind of sucks.  The plot is kind of average.  I mean, what else is there to say?  A killer is out stalking people of a certain profession and an unusual person takes up the job.  Do slasher films get more cliched than that?  Hell, some Giallo films have this plot (i.e. The Cat O'Nine Tails).  It's just kind of there, I guess.  The acting is...about what you'd expect.  The film has a lot of talking, but it's mostly pretty generic.  The kills are...fairly-inspired, but that's about it.  Some of them are good, others are not.  This movie just doesn't inspire all that much interest.  Hell, I kept cutting back and forth to it over a three-hour period.  I tried, but...yeah.  It's not a terrible film by any means, but it does nothing to draw either a negative or positive reaction.  It's pretty much the Hall and Oats of slasher films.  Why wasn't that on the VHS box, people?  On the plus side though, boobs. 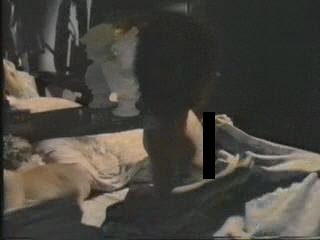 Up next, a made-for-TV film with a familiar title.  Where is the Thin White Duke when you need him?  Stay tuned...