At long last, I've reached the final chapter of Anthony Perkins- Director.  Much like William Peter Blatty, he only Directed two films.  The similarities don't end there as it is hard to argue that Psycho is not Perkins' series (as much as it is Hitchcock's or Bloch's).  Unlike those two people, he did not have the common sense to stay away from the film series after the first one.  Now, if they had adapted Bloch's novel of Psycho II, that would be another story.  With all that said, here is what you need to know.  Bates has returned to the motel, but got into trouble with Marion Crane's sister.  In The End, she was given all of the blame for the recent crimes, while Bates remained free.  As a bonus, his real mother came to him...and he promptly killed her.  All caught up?  Good.  Prepare for the dull wrath of... 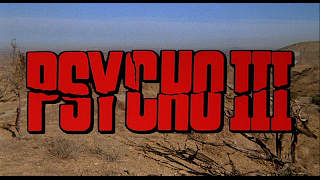 Rather than beginning with Bates, we begin at a Church in the middle of nowhere.  A depressed nun is threatening to kill herself since 'there is no God.'  She ends up kind-of-sort-of shoving the Mother Superior to her death, whereupon she leaves.  I guess Catholics don't believe in cops!  She ends up taking a ride with a drifter (Jeff Fahey), who makes a move on her.  When she says 'no,' he kicks her out.  We finally meet Bates as he's living in his house and has taken up Taxidermy.  In a gross moment, he uses the same spoon he is scooping up saw dust with to scoop up peanut butter.  Thanks, Perkins!  A woman shows up in town looking to do a story on Bates, which makes the Sheriff and Diner Owner none too pleased.  Bates sees the depressed nun and has a thing for her, since her initials on her suitcase are M.C.  In another convenient event, Fahey shows up at the Bates Motel looking for work, whereupon he gets hired.  Perkins decides to indulge in a little symbolism... 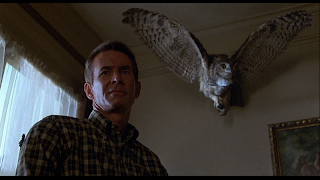 The woman shows up at the Bates Motel and gets Suite #1, the same one that Marion Crane had in the first film.  Bates has a little freak-out and talks to 'Mom' about the situation.  'She' convinces him to put on the dress and wig (which looks silly on a 54 year-old Perkins) and kill the lady.  As he opens the curtains, however, he sees that she has slashed her wrists.  In a silly moment, she sees Norman as the Virgin Mary, which is a sad attempt to make this seems serious.  By the way, Norman calls the cops and gets her to a hospital quickly...but still finds time to take off the outfit and stash it somewhere.  It's amazing to think that she lived!  Around this time, Fahey meets up with the writer and agrees to give any information on Norman to her.  Norman, meanwhile, decides to both go after the sad nun, while also indulging in some murder.  The first on the chopping block is a random 'bar fly' who gets dumped by Fahey. 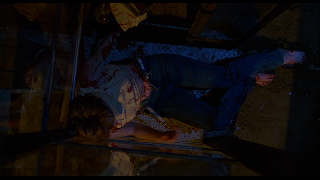 Things continue to compound, although they do so pretty slowly.  The writer continues to look into Norman's missing mother and learns out some interesting facts.  Conveniently enough, the last number she called was Norman's and he picks up the phone.  Having seen Psycho II, I don't recall that phone call- continuity error? We get some more for the body count as a woman is killed for, well, using the bathroom.  The writer and Fahey give the nun the info on Norman, which seems to turn her against him.  Moments later, she covers for him...alright.  Norman's mom goes missing and he finds it in Fahey's room.  A fight breaks out after Fahey tries to blackmail him, leading to the man being knocked out with his guitar.  Get it- he kept telling people not to touch it and then it was used to kill him!  He stays alive long enough to fight with Bates & finally dies after the car crashes into a lake.  See- it's just like the first movie.  The writer confronts Norman at the house, but arrives too late to save the nun from falling down the stairs (just like the Detective in the first film) and dying.  The guy loses his nerve after the writer reveals that his 'mom' is really his aunt and he gets arrested, with the Sheriff doing pulling a '180' on the 'Don't bother Norman' thing.  He is taken away, but has time for one last reference to the original (better) film.  The End. 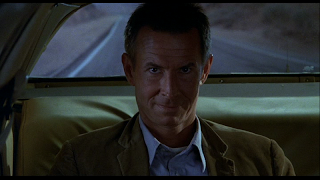 The third time is not the charm.  Ignoring that obvious line, the plot of this film has potential, but gets too mired in its own back story.  I should give them credit for building off of the second film, as opposed to just doing something new.  The problem here is obvious: the plot of Psycho II sucks!  It rehashes a lot of things and adds nothing of real substance.  The original film is great- just leave that alone!  For all the complaints leveled at Gus Van Sant's remake, he didn't change anything.  Admittedly, he also didn't change things, but my point still has some validity.  The acting here is alright, although Perkins fluctuates a bit too much for him to be believable as someone who is considered to be 'sane.'  His random freak outs and twitches should not go this unnoticed!  Of course, you can't entirely blame an Actor for a bad performance- you also have to blame the Director.  Unlike William Shatner, Perkins did not get a good performance out of himself because he didn't respect himself so much.  Futurama references aside, Perkins apparently has admitted that he wasn't up to being a Director- a fact that I won't protest.  The bottom line- the film is not the worst thing to happen to the Psycho license.  I'm talking about that film tomorrow. 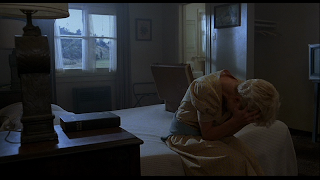 Up next, the final film in the series- thank God.  It's part sequel and part prequel, but all bad.  Stay tuned...
Posted by Alec Pridgen at 11:59 PM