Why not end with The Beginning?  After all this time, I'm finally happy to wrap up the Psycho series, as it hasn't been good since the first film.  It's been over fifty years since the original, so let's just put an end to all of these sequels.  Unlike the first two sequels, this one doesn't exactly do a lot to make you feel like you're watching a series.  Plot threads are left hanging and none of this just feels right.  You know why?  In 1987, someone made a 'back door pilot' for a show called Bates Motel.  The premise- Norman Bates dies in the Institution and wills the Motel to his cell-mate.  The equally-crazy guy was trying to run the place, but the ghosts of it kept rearing their ugly heads.  The movie did not get good ratings, so the show was never made.  Anthony Perkins was really upset by this and was instrumental in a 4th film being made to fix this whole thing. This film is notable for trying to explain in excruciating detail why Bates went crazy and to also bring closure to the whole thing...since the cash-in film/show pilot ruined it.  With all good intentions, good results do not always come.  To see just how true this is, read on. 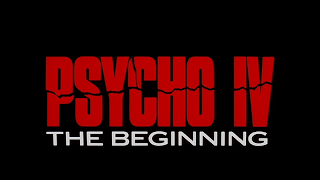 We begin with close-up shots of people putting icing on a cake.  I'm sure that's symbolic of something, but I don't know what.  I should also note that this film is Directed by Mick Garris, proving why he Produced the Masters of Horror series, but did not make films for it.  He also Directed Sleepwalkers.  Getting back on track, we see a radio show (consider that phrase for a moment) which is discussing the topic of Matricide.  We meet a man who killed his Mother and his Grandfather who doesn't seem to mind so much.  Rather than covering this more interesting tale, we get Norman calling in.  Come back, come back!  He proceeds to tell the tale of his first kill, which is basically five minutes of filler of a girl hitting on him for no good reason.  After showing off her breasts, she wanders into Norman's mother's room and gets killed by Norman in his silly outfit. 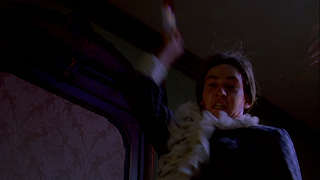 Norman continues to tell stories of his past to the host (C.C.H. Pounder), while her Station Manager (John Landis) looks on.  As a side note, Landis played a Radio Technician in 1989's Spontaneous Combustion, while he plays a Radio Station Manager in this 1990 film- odd.  As far as the plot goes, we get a bunch of scenes of young Norman (the real star here) and his mother (Olivia Hussey).  She does lots of weird things with him, including making him toss his 'porn' out in the rain and making him dress up like a girl, whereupon she locks him in the closet.  All of this is weird...but not scary.  Garris throws some odd flourishes in here, like Perkins looking out the window and seeing a flashback taking place.  Either he's crazy or we all are now!  In between those scenes, we get stuff like Norman talking to his new lady friend (the irony abounds here!) and the people at the Station figuring out that it's Bates calling them.  Gee- they must be Detectives or something!  They keep Norman on the line as he recounts more of his past, including this Top Gun-style showdown with his new step-dad. 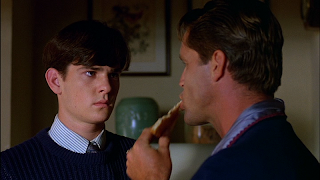 Do you really care what happens next?  You do?  Fine- I'll continue.  We see more scenes of Norman and his mother.  Eventually, he poisons the boyfriend and this leads to a confrontation with Mom.  Remember how the Writer said in Psycho III how the sister killed the boyfriend and mother?  Well, that's a lie.  Plot hole or planning- you decide.  In The End, Norman and his lady friend go to the Motel to give this film a climax.  As they set the place ablaze, Mom makes a couple more random cameos...just because before her long-dead corpse starts yelling at...um, someone.  If Norman can hear her, he's doing a good job of ignoring her.  Is the movie implying that we're all crazy?  Of course, I did just watch Psycho III and IV in one sitting, so they may be right.  The End. 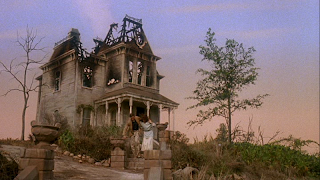 At this point, I need treatment.  The plot of this movie is a sad, sad joke.  Seriously, what is the point of this?  Did we need 90 minutes explaining how Norman's mother did a bad job raising him?  No.  Pretty much everything here is either pointless (most of the Mom scenes), filler (most of the scenes in the Radio Station) or just ruin things.  For example, having Norman kill this random girl probably sounded neat in theory.  In reality, it takes away from the impact of the first film, as you now know that he was apparently doing murders for years.  Nobody seems all that interested in being here, save for Hussey's over-the-top acting.  You're a good actress, but I guess anyone can be dragged down by crap like this.  If you want to watch a Psycho film, watch Psycho.  If you are forced to watch a Psycho sequel, I guess make it II.  It's not really a good film, but it's much harder to hate than this dreck.  Are you proud of yourself, Landis? 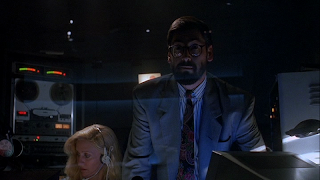 Next up, another week of Strange Killers.  First on the block, John Carl Buechler brings us a film about were-hyenas.  Stay tuned...