Could 5 film viewers be wrong?  In the winter of 2010, a weird film came out called The Warrior's Way.  It was a hybrid of a Western and a Wuxia film.  It was not exactly clear why this film was made or why they thought that it would be a hit.  Despite nobody seeing it and the film losing millions, it got a DVD release (no doubt to appease the studio) and I finally saw it.  What is the plot of this dud?  A samurai warrior abandons his blood feud with another group of samurai and moves to the Old West to find peace.  Naturally, war and strife follows him there, making life hell for 'Lois Lane' and 'Barbossa.'  Is the film worthy of attention or deserving of its flop status?  Let's find out as we try to decipher... 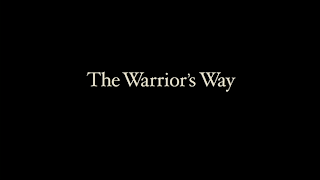 Our hero is billed as the Greatest Swordsman in the World...well, after he kills the Greatest in one move.  I should mention this fact right away- our hero is freaking invincible! 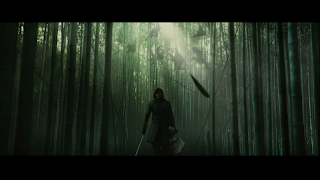 Rather than finishing out the contract and killing the last of the rival clan (a baby), he goes to the Old West to see a friend.  However, since the guy is dead when he gets there, let's just consider him to be a plot device! 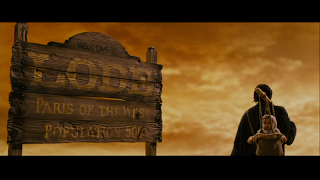 The town is full of characters, including a bunch of circus clowns, a black midget and- the craziest of them all- a woman who speaks her mind.  Quick- burn her!!! 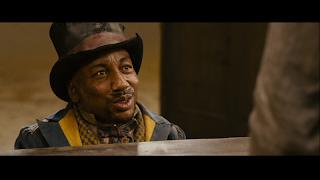 They have a romance/friendship blossom by way of him training her to fight with swords.  Like most romances, it flourishes when he starts chucking rocks at her. 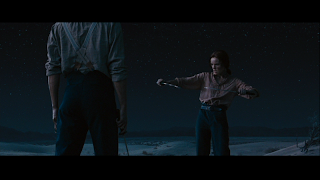 We get some past violence via flashback, but otherwise no real action for a good thirty minutes.  Thank God I totally care about these people and their...um, well, JUST DO SOMETHING!!! 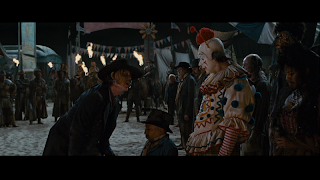 The rustlers from the beginning return and try to kill everyone.  Our heroes gather an elite force of a drunk sniper in a carousel, the Swordsman, some clowns and the midget.  Cower in their presence! 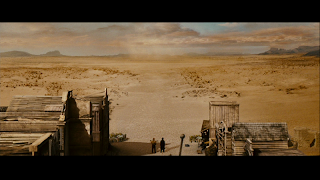 Of course, our hero is freaking God, Musashi and Steven Seagal rolled into one, so he takes out everyone in sight. 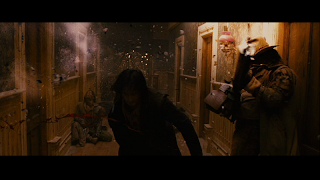 It doesn't even matter when the ninjas from his own clan show up.  He just cuts them in half without even looking at them!  You probably think that I'm kidding, but I'm not.  The final fight is five minutes long- but only because three and a half of them are a flashback. 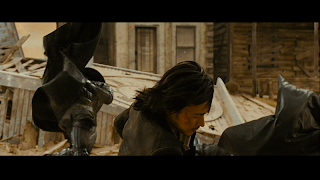 I won't SPOIL the ending for you here, but I will give you this silly image with no context.  The End. 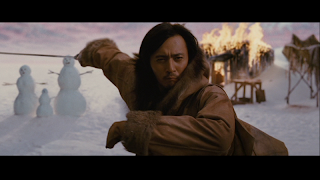 There's a line and you've leaped over it!  The plot of this movie is goofy, strange and unfocused.  Unlike Dahmer vs. Gacy, it's not full of random sub-plots that don't matter.  Instead, it just throws a bunch of characters into the story and drags its feet for about forty-five minutes.  Do I care about the midget?  Do I care about the lady's revenge plot?  Do I care about the damn baby?  Not in the slightest.  The movie teases you with action (albeit silly) in the early going and then says 'enjoy this boring film in the middle.'  No thank you.  I'd rather just watch a silly film, thank you.  I've already watched cloned serial killers, Nazi werewolves and Vampire Hitler this week- I can take it!  This movie does not realize who its audience is and splits its narrative into two parts- an interesting one and a boring as hell one.  None of this is terrible, mind you, but it just leaves you either wanting more action or more 'life in the West.'  You can't have your cake and go play Badminton too.  If you can deal with those movie's case of D.I.D., check it out.  Take us away, Deleted Scene that reveals the over-use of Green Screen... 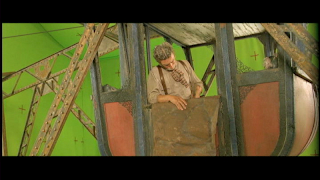 Up next, the week is wrapped up with a silly film by a Director who's famous for a Conservative propaganda film.  This movie, however, is a cavalcade of 'almost stars' in a generic plot.  Stay tuned...
Posted by Alec Pridgen at 11:59 PM

Email ThisBlogThis!Share to TwitterShare to FacebookShare to Pinterest
Labels: 2010, wuxia