Lost in Translation: The Devil's Sword

A crazy film from Indonesia got a release in Germany.  Not surprisingly, the transition from the two countries made the movie poster kind of weird... 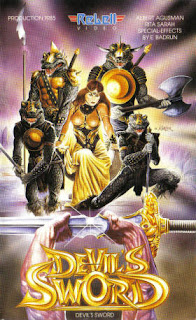 A Medieval version of Hell Comes to Frogtown featuring a guy who doesn't know how to hold a sword?  Alright then.

To see the review of the actual film, go here.

Next up, a famous film about dinosaurs.  Naturally, the poster says that it's actually about an insect.  Stay tuned...

Email ThisBlogThis!Share to TwitterShare to FacebookShare to Pinterest
Labels: Indonesia, lost in translation