Well, it's not Slumber Party Massacre II!  After that last movie, my expectations have lowered quite a bit.  Mind you, the first film was a mindless slasher film, but it at least made sense.  So what does this film do to make itself better?  Well, for starters, it's not a dream.  Hallelujah!  Seriously, I am so relieved to hear this that I'm possibly willing to ignore the movie's numerous flaws.  I mean, I'm not going to, but I was almost willing to.  The plot has numerous holes, the pacing is still off and the villain is...well, confusing.  What motivates him?  That's the kind of question that should be leveled at the Writer, but I'll try my best to answer it.  He does it to....um, kill people.  I'll get into more depth below.  Put on your lacy underwear and blood packs for one last... 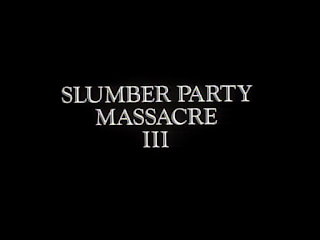 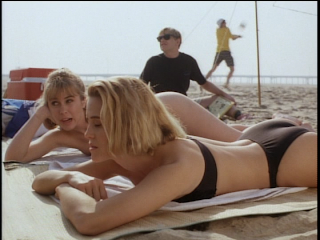 Just like the last movie, the girls dance around and two of them (one of whom is Maria Ford) strip down.  If you like repetition, then you'll love this... 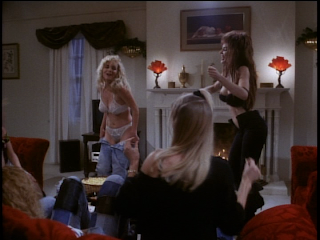 FOR THE THIRD FREAKING MOVIE, the guys spy on the girls and show up unannounced.  You can set your watch by this movie's plot points! 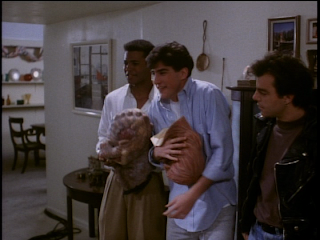 It's an '80s slasher film (technically, this was made in 1990), so we have some sex and sluts before the murders start.  I should mention that this girl is in her friend's house, so...eww. 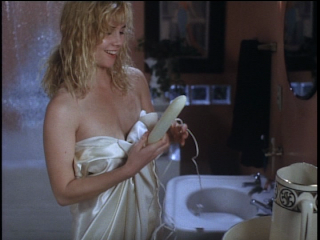 Could this man be the killer behind all of what has happened so far? 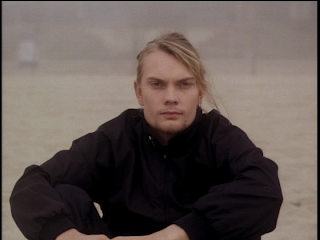 No, it's the jock guy.  You weren't seriously thinking that it was that guy above were you.  This guy is crazy because his uncle was a cop and committed suicide recently.  He has targeted these people because....um...the alignment of the Sun and Moon? 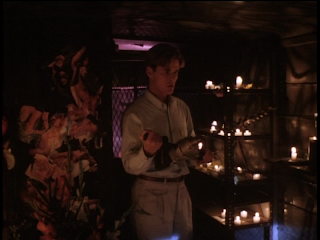 He takes care of most of the cast in the ensuing twenty minutes.  Most of them are bloody, but one guy dies from just being clocked across the face with the non-spinning drill.  What the hell?!? 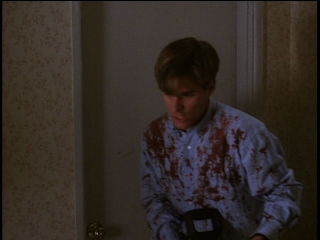 After a long, drawn-out sequence with running, hiding and a cameo by Deathstalker II (more on that later), the killer is taken out with his own drill.  I should mention that this film was also Directed by a woman.  The End. 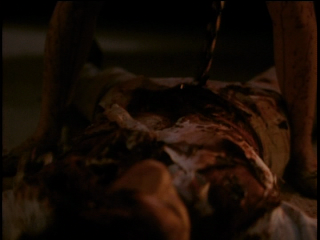 I love a plot, but could you actually explain any of it?  The movie's plot is just kind of there, never really excelling or failing all that much.  Nobody is all that motivated, nobody is all that interesting and nobody is all that important.  Characters are set up and then tossed aside.  One of the guys is given a burgeoning romance, but killed off in the next scene.  That served no purpose.  I should also mention the ancillary characters like the Pizza Girl (more on her later), the Peeping Neighbor, The Stalker (who is killed off for no reason) and the Policemen.  Almost none of them serve a real purpose and just eat up screen time.  To be fair, many of the deaths are bloody and they are spaced out better.  This isn't like the last film spending fifty-plus minutes building up nothing and suddenly three people dying in a matter of moments.  The first film is famous for its ironic origins, the second one is notable for being a mess and this one...is just kind of there.  On the plus side, I'm done with this series.  Now I can move on to Sorority House Massacre I and II, Hard to Die and Cheerleader Massacre I and II- someone help me!  I'll leave you with a contrast between the additional footage shot for the film (below) and how it was spliced in awkwardly... 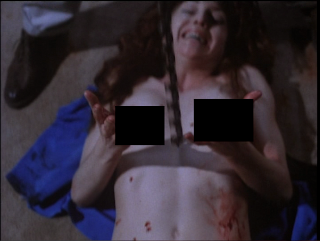 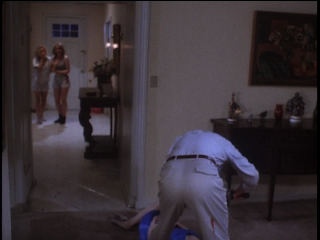 Next up, a hard-to-find film is available on streaming.  As a bonus, I already did it's sequel...for some reason. Stay tuned...
Posted by Alec Pridgen at 11:56 PM