Well, it's not Highlander 2.  For those not aware, here is the basic story.  A surprise hit was made in 1986 called Highlander, a film starring Christopher Lambert as the immortal Connor McLeod who has to battle The Kurrgan to gain 'the prize.'  It was neat, clever and wrapped up nicely.  So, naturally, they made a sequel...which was set in a post-apocalyptic future...and said that the immortals were aliens from the planet Zeist.  It sucked.  It really sucked.  A while later, an attempt was made to fix everything.  The result- today's film.  They basically ignored that film and made a sequel to Highlander alone.  Yes, Highlander 3 ignores Highlander 2!  Basically, we get a film cheat and Connor gets 'the prize' taken away from him.  Can he defeat the new villain (who is actually from 400 years in his past)?  Find out in... 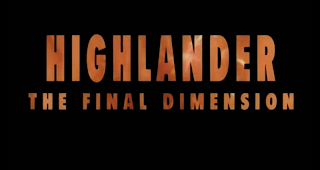 We get some opening narration from Connor himself, since the THIRD film is the best time to jump into a film series.  By the way, Lambert has a very severe Myopia, thus explaining that stare. 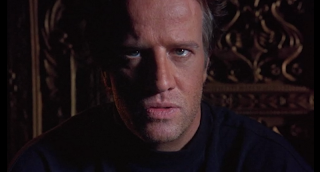 Sometime between the beginning of Highlander and the rest of it, McLeod went to Japan and trained with a wizard/swordsman (Mako).  Unfortunately, Kane kills the wizard...but gets trapped in the cave for 400 years. 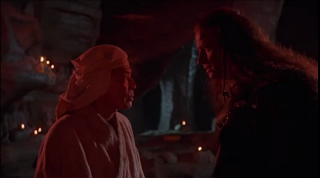 He gets out, taking the prize away from Connor.  This seems in contrast to some statements made in the film, but they just want you to ignore it.  Kind of like how I'm supposed to ignore how fake that wig is!

Nearly an hour in, the two finally fight for real.  This is marred by a couple of things.  First- the fight is only decent.  Second- it ends abruptly.  Third- they fight while swinging on ropes...and Peebles stunt double is given a close-up! 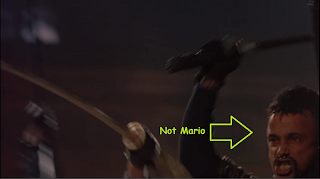 McLeod is also very bad at hiding his immortality, as shown by these pictures he has hanging on his walls.  That's...stupid. 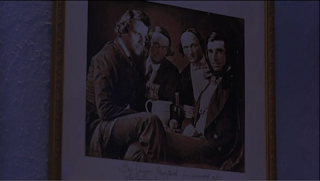 Kane discovers McLeod's adopted son when he happens to break in when the kid calls.  This allows him to trick the kid into coming into his clutches.  More importantly, however, there is the fact that McLeod has an autographed head-shot of his 'son' on his desk! 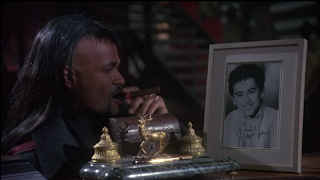 Speaking of important, did you know that you could stand on illusions.  They're not just for your eyes anymore! 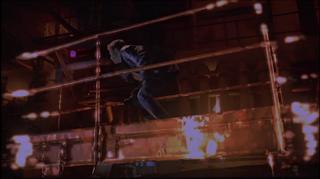 In The End, McLeod wins the day and gets his AHHH! QUICKENING, regaining the prize and living happily ever after...until Highlander: The Series...and Highlander: Endgame. 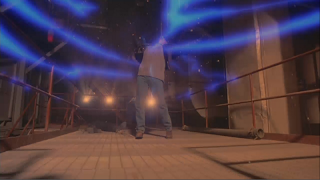 Well...it's not Highlander 2.  The plot of this movie is a bit goofy and has its fair share of holes.  It doesn't do anything on par with the Planet Zeist, a solar shield or Ramirez being resurrected just because McLeod thinks about him while getting a Quickening.  By the way, that is not a euphemism!  That said, I have many questions and/or complaints.  How does he lose 'the prize' because the guy gets freed from his cave?  Who exactly decides when 'The Game' is over?  Why is it all a trick played on Michael Douglas?  Wait- wrong Game.  Seriously though, the movie tries desperately to be as interesting as the first film.  To that end, they pretty much rip it off.  Dead mentor?  Check.  Evil villain who kills him?  Check.  Villain has a 'K-name?'  Check.  By the way, every major Highlander film has a villain with a 'K-name.'  Odd, right?!?  Is the film good?  No, not really.  It has some neat moments in it, but there is not enough action, good plot or overall atmosphere.  Oh yeah, they also use an Airport in Montreal to double for Newark International.  See for yourself... 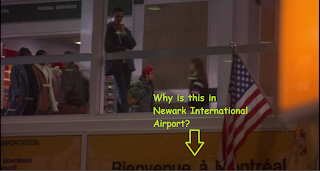 Next up, with Witchboard 2 M.I.A., that leaves the other sequel to review.  Chuck someone out a window, Whitesnake!  Stay tuned...
Posted by Alec Pridgen at 11:59 PM