Dare to see the film that the studio system slashed up more than, well, everyone in this movie!  When this film was released back in 1990, there were some rough times with studio censorship.  Just a few years earlier, the debate was out about the introduction of the PG-13 rating, due to films like Gremlins and Indiana Jones & The Temple of Doom.  Never mind the fact that you're releasing a TCM sequel into theaters in an age where mothers are trying to ban CDs that use bad words!  Of course, this lesson was not learned by Adam Green just last year with Hatchet 2, so there's that.  This film is kind of an odd mess is it alleges to be a sequel to the previous two films.  The connection between the first two was tenuous enough (basically, the narration just said so), so this is really stretching it.  The key here, however, is that the focus of the film is Leatherface, as opposed to Bill Moseley constantly scratching his head with a coat hanger.  Does it work?  Unfortunately, the poor guy (whose actor was actually in Hatchet 2) is overshadowed by a man who would become a star later- Viggo Mortensen.  That's right, before he was fighting Orcs, riding horses and fighting Vincent Cassel in the shower, he started out here.  The film is more famous for his presence here, but is it good?  To find out, read on.  Get out your skin varnish for our trip to visit... 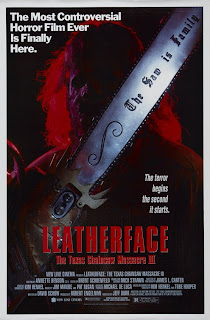 The opening narration (why not, I guess?) explains that many of the people involved in the crimes in Texas (see TCM 2) were killed or caught, but some of them escaped.  How?  There is no answer, but it fulfills the Opening Narration requirement for the film, so let's move on.  After that, some random people are killed by the family.  I should probably care more, but I don't.  The only thing that really matters our the main characters, a couple driving through the area.  Good advice- if you see Christopher Lambert out there, do not get involved!  They meet up with a hitchhiker, since that's apparently also a requirement for the series.  If a scene of a woman being dry-humped by a chainsaw is a requirement too, I'm leaving! 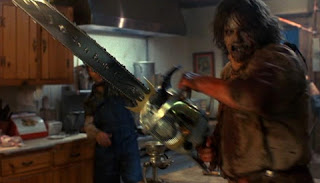 Our heroes go to a Gas Station with the drifter (Mortensen) and a fight breaks out.  Why?  Because the owner spies on our heroine in the bathroom (not shown in much detail).  The guy busts out a gun and appears to kill Mortensen as the pair drive away.  We also meet our other hero- the black guy from Dawn of the Dead.  Yes, I know that he has a name, but this seems simpler to me.  The group make it out into the woods where their cars are both attacked by the killer family.  The guy and girl get captured, while Dawn guy escapes.  We meet the whole family, which includes an ancient Grandfather, a mother with a hole in her throat, three brothers (Mortensen, the Gas Station Owner and Leatherface) and a little girl.  Wait- if Mortensen is part of the family, what was the point of that fake fight and death?  Nothing- oh, okay!  Time to nail her hands to the table for dinner! 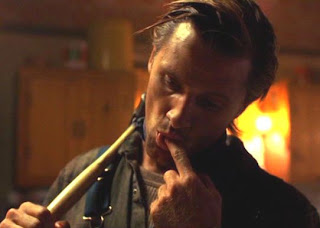 Like most films of this type, the Third Act does not go well for most of them.  Let's break it down, shall we?  The boyfriend dies in a pretty anti-climactic way, while Mr. Dawn shoots up the house, killing mom and grandpa.  No, he was so old and full of death!  The other brother who's not Leatherface or Mortensent meets a grisly fate as well.  Unfortunately, Mortensen is next to go as he's lit on fire by Dawn guy.  No throne for you!  Dawn and our heroine escape into the woods, but Leatherface is close behind.  After a rough fight, Leatherface seems to win the day, while our heroine escapes.  She makes it to her truck to leave when Dawn appears- alive.  Wow, that was surprising...and illogical.  Maybe we'll get a happy...the other brother isn't dead after all, but becomes dead a moment later.  Leatherface, meanwhile, lives to saw another day.  The End. 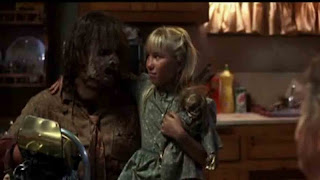 Family- what a downer!  The plot of this movie is about as simple as it could get, save for a few moments designed to fool the audience.  Ultimately, the whole thing is too simple and direct.  I guess I can't blame them for focusing on the family, but it costs them a bit for actual plotting.  So much of the film is people running around in the dark woods to pad the run-time out.  The rest of the film is so focused on showing the Bean family acting weird and violent that everything else suffers.  That said, my problems with it are probably reasons why it's so popular with other people.  Here's the thing- I don't want to empathize/be amused with/by a killer.  That's my key problem with the later Nightmare on Elm Street films as well.  No matter how popular they may become, they are still killers!  The heroes should be the heroes, as opposed to just fodder for the film's body count between character moments with the villains.  This mindset seems to come around every once in a while, the most recent example being the Saw films.  My random tirade aside, this is a sub-par movie that benefits from a controversial reputation.  Is there a lot of blood and guts?  Yes.  Is there a lot of interesting moments and a plot?  No. 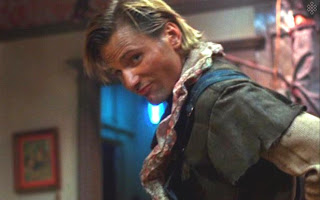 Next up, alligators attack a small town (in Romania) one more time.  Betty White is not here...because she has an agent.  Stay tuned...
Posted by Alec Pridgen at 2:30 PM