Another year comes upon us and we return to the world of shitty, Direct-to-DVD movies.  When you think of those, you think about The Asylum.  You guys make utter, utter shit.  This is the first of two films by them this month, so get ready for that.  Today's film is The Asylum's answer to Avatar.  The question was apparently 'What unrelated piece of shit can you make and say it's related to Avatar!'  Obviously a world full of CG characters was right out, so we instead get Antonio Sabato Jr. with alien people in rubber masks and CG spiders.  As much as I am pretty 'eh, it's alright' about Avatar, there's no comparison here.  Maybe the film can survive on its own merits, he suggests ironically.  Let's see.  Get your ass out to see... 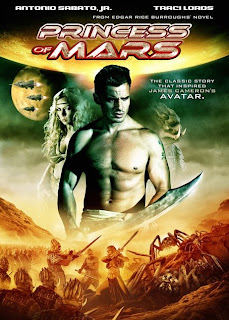 The film begins in Afghanistan.  Yes, being topical is always a good thing in an Asylum film!  Our hero is John Carter (Sabato Jr) and he's a Sniper.  He doesn't really do anything to prove this, other than tell us that he is.  After some walking, he goes to a local bar and meets up with a friend.  Later that night, the friend appears to be being held hostage by terrorists.  Naturally, as a sniper, he walks right up to them.  No, really.  He takes out the men, only to learn that his friend was one of them.  Why the facade?  Why not, I guess?  He gets shot, however, and wounded mortally.  He wakes up in a military hospital where he's apparently signed up for a new experiment.  Basically, the brass put his entire DNA structure onto a 16 GB Flash Drive and...wait, let's not skip that part!  You mapped the human genome on something that small?  Anyhow, they plan to send his DNA to another planet and re-animate him there.  How does he get sent there?  Science- that's how!  Sabato wakes up on Mars-116 and our first major plot-hole arrives: the guy still has his tattoos.  That's some nice bullshit, huh?  Oh yeah, he's attacked by aliens too. 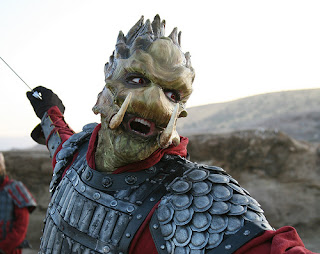 Sabato runs into some trouble after he kills one of the alien soldiers.  They put him in chains and force him to fight.  Thankfully, the DNA-restructuring gave Sabato super-strength allowing him to throw one of the aliens' CG doubles into a hunk of stone.  In addition to that, he has super-jump.  No, really.  I've never read the 'John Carter on Mars' books, but I doubt that they included that!  The aliens are impressed with his vaulting abilities, so they keep him alive.  Meanwhile, we get a sub-plot involving the titular Princess of Mars (116) and her people being targeted by the aliens.  In another sub-plot, a mysterious man in a mask watches the events go on.  Along the desert trip, the aliens and Carter are attacked by CG spiders.  Using their 'straw-shaped' rifles, they turn the tide.  In a real cop-out, we see a bunch of close-ups of Sabato shooting and then pan out to see 100 dead aliens.  Bullshit!  The Princess eventually gets captured, leading to a forced romance with our hero.  Chemistry- what's that?!? 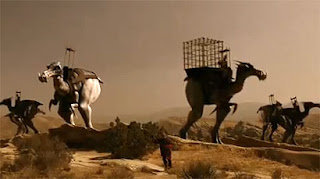 Further along the trip, the lead alien guy befriends Carter.  It has something to do with his battle prowess, apparently, but it's otherwise silly.  The awkward romance between Carter and the Princess is continued when the group is attacked by Spiderlings.  Naturally, these creatures look like flies- huh?!?  We also have some exposition crammed in about an air processing plant run by humans on the planet that is super-important.They finally meet up with the big boss, who is mad at the lead alien for promoting John and wants the Princess to be his bride.  John is put into the arena, where he uses his super-strength to remain victorious.  However, he learns the truth behind the mysterious man following them.  Are you ready for some real bullshit?  That is the terrorist guy from before, who paid the military to repeat the experiment on him.  Okay, that definitely wasn't in the book series!  All of this leads up to a big fight at the processing plant between Carter and the terrorists.  If you want to see one of the worst sword fights ever mixed with some of the stupidest 'jumping effects,' this is your film!  In the end, Carter defeats the villain by having a Spiderling kill him and he returns home...where he's not injured anymore.  He vows to return to Mars (now without the 116, apparently).  The End. 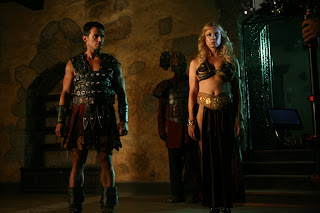 Big shock- this movie sucks!  The plot is stupid and is bogged down so much nonsensical crap.  I didn't even cover a couple of the bits for you.  For example, the alien leader is thrown into the arena against John, but won't fight.  So, to make things fair, John tosses him into a wall!  Yeah, that's a good plan.  In addition, the terrorist guy ruins the super-important machine by pulling out one part.  You didn't put a fail-safe in there.  There's also a part where John eats a bug fed to him by a lady alien and he can now speak their language.  A couple things to ask here.  First, how does that work?  Second, why do you know that it works?  You all speak the same language!  Third, why do you keep those around?  You speak the same language!  If you're going to say that the human people don't speak it, that would be fine, except that this is not addressed with them.  Are we to infer that they all eat the bugs on a regular basis just to be safe?  Aside from all those flaws, the Special Effects are bad, the acting is bad and Traci Lords is not worth the price of 'admission.'  There are some unintentional laughs to be had here, but not enough for me to watch this again.  You may disagree. 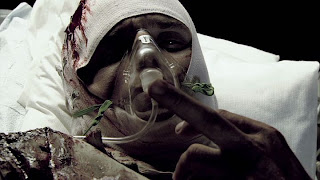 Next up, Japan brings us a movie with a can't-miss premise.  Check in to see how it manages to miss.  Stay tuned...