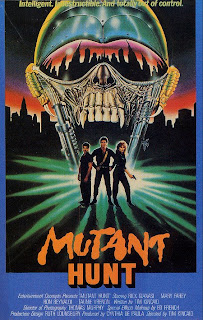 The film begins with some super-cheesy synth music and a city.  We meet Z, the head of an evil corporation.  His goal: make robots to take over the world.  Well, that and borrow outfits from Sybil Danning.  He brings in a scientist to test the robots- who are just guys with crew cuts.  His test involves them fighting each other and more than a couple of them dying.  Yes, this is a perfect test for things that you're trying to sell!  While the scientist objects, a few of the robots just sort of wander away.  They don't sneak out, but they aren't exactly seen either.  It's only after the fact that Z even notices this!  We jump to a woman in a different lab making schemes involving Z and the robots.  This character is so vaguely-connected to the plot that I barely feel the need to address her.  A young woman meets up with her brother- the scientist- but is forced to flee.  Desperate, she seeks out a man to help her.  Despite being Rick Gianasi in  Kincaid film, he's not Waldo Warren.  On the plus side, no penis bullets.  The guy is first seen sitting in bed with a skanky blonde.  The woman runs in, followed by two of the robots.  They proceed to have one of the worst fight scenes of all time, which eventually ends in one robot-cyborg dead, another wounded and the skanky blonde tossed out the window.  Don't ask me how we got there, please. 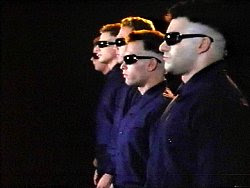 With the threat realized, Rick calls in some help on the mission.  This involves going to a strip club, although nobody really gets naked per se.  Like most of the sets, it appears to be a vacant warehouse room with drapes and foil put up.  The point is to recruit a dancer who is also a bounty hunter.  The evil woman from before casually sits next to Rick and the lady as they make their plan and subsequently sends a robot after her.  Despite her being tough a moment ago, she's suddenly scared and weak.  She calls in her Oats-looking friend to help her, who finds her by way of a Game Boy/watch device.  Don't ask me how that works please. They run to the same location with a bridge in the background from The Occultist and proceed to have a bad, martial arts fight.  They make me yearn for a Daniel Bernhardt fight!  Our heroes just sort of walk away as the robot can't follow because...well, he can't.  Our heroes regroup and make a plan: split up and find the remaining robots.  If they don't, they just sort of meander about killing people.  Sure enough, one of them does just that.  A couple sits in the street making out before a Chinese Restaurant employee is attacked by a robot.  He can actually do kung-fu, so, naturally, he's a minor character here.  Oh yeah, Rick takes a break from stopping the killer robots (which actually hadn't started yet) to have sex with the dancer.  Hurray. 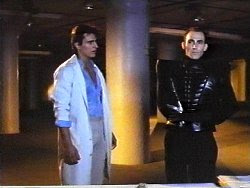 Rick shows up after a man gets his head ripped-off (in silhouette, mind you) but does stop one robot.  'Oats' runs into another one, fights it some more and runs off again.  Our hero, ladies and gentlemen.  The fight moves to a new location, where some punks show up to fight the robot...just sort of because.  After they fight, 'Oats' stops hiding and beats the robot- that's totally fair.  Only one robot is left now.  Unfortunately, a silly plot device rears it's ugly head in the form of the mostly-dead robot.  He's sort of alive and is now good...since he's apparently not infected by the drugs.  What drugs?  Well, you see, they infect the robot-cyborgs with drugs to make them crazy, thus turning them into 'mutants.'  No, really.  Z (remember him) explains his plan some more to the scientist, all the while looking at his cue cards.  Good job, Mr. Walken.  The evil woman also has a plan of her own- attack the base with her new model of robot.  This robot is, naturally, someone that looks like a big, muscle-covered guy.  Our heroes take a break to blow up the robot-production facility before showing up for the final fight.  The new model is tough, but eventually goes down to some weak, barely-connecting kicks.  Z dies from a gunshot, finally putting an end to this.  Hurray. 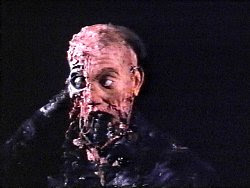 This movie sucks!  The plot is stupid and, more importantly, confusing.  I can deal with dumb plots- and I do- but I can't deal with obtuse ones.  The story involves an evil corporation, a different woman who's evil, renegade robots, a scientist, Gianasi and 'Oats.'  That's not even counting the silliness with the dancer and the bit with infecting robots with drugs.  Mind you, Cyborg Cop III (the unofficial one) features robots filled with insect blood, while Godzilla X Mecha-Godzilla features a robot built around a skeleton (since that apparently makes it more responsive).  So I'm used to confusing science with robots, but this still takes the cake!  The acting is...as bad as you would think.  I mean, this is a Rick Gianasi film.  Do I even need to say any more?  Yeah, I thought not.  This movie is fun for some stupid laughs, but only if you can laugh at terrible acting and bad kung-fu.  Speaking at someone who does both, this one is still barely-watchable.  It's so badly put together that you expect to see the name 'Pinto' on it somewhere.  It's obscure and hard to find- good.

Next up, a famous book series spawns an Italian production.  Urbano is back- this time ripping off Conan and Indiana Jones in one fell swoop!  Stay tuned...
Mutant Hunt [VHS]