Living Dead and Deader: A Virgin Among the Living Dead

Amongst the famous names in the exploitation genre, one stand-out is Jesus Franco.  Mind you, it's not related to quality of film- I defy you to prove me wrong- but it has more to do with quantity.  In his 'illustrious' career, Mr. Franco (his real name) has directed 192 films!  That's nearly four films a year, given that the first one was made in 1957!  Good God- take a break!  Amongst those films are such classics as Bloodsucking Nazi Zombies, Lulu's Talking Ass and Dr. Wong's Virtual Hell.  Yes, this guy has clearly been the Spanish Kurosawa.  Just to cover my ass (since he is 80): he's probably a nice guy in real life.  I'm here today to talk about his 56th film: A Virgin Among the Living Dead.  Also known as Zombi 4: A Virgin Among the Living Dead, Among the Living Dead and Christine: Princess of Eroticism, this film is basically a rip-off of Mario Bava's Twitch of the Death Nerve (which also has at least two alternate titles).  It centers around a group of family members gathering for the reading of the dead father's will.  There's more to it...but not really.  I'll do my best here, but I'm no magician.  Get out your giant black dildos for my review of... 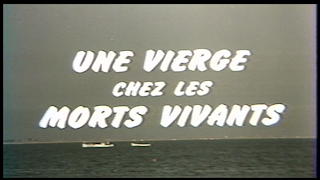 The long credits sequence is displayed over some shots of a random city on the French Riviera.  While it's nice, the shots have nothing to do with the plot or what the film is really about.  Thank you, pointless filler from the first minute in!  Our heroine is a nice, virginal girl returning to the family estate for the reading of the father's will.  Mind you, she's virginal compared to everyone else.  Plus, she has at least six nude scenes in the film (sorry, I lost count), so take that for what you will.  The family is a group of weirdos.  To make things even worse, they're all so generic that it's hard to follow who exactly they are.  Should I care?  Give me a reason, movie!  On top of that, the film doesn't even get right to the whole 'reading of the will' thing until about another thirty minutes.  When even the film isn't interested in its own plot, why should I?  Instead of the plot, what do we get?  A long, slow-panning shot of the woman naked in bed and a scene where she goes skinny dipping. Her uncles...or grandparents...or something spy on her, only to be interrupted and chased off.  I would say that this was entirely pointless, but it served the exact point that it intended to.  Subtlety, thy name is not Franco! 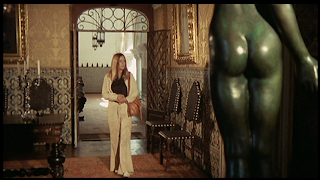 As things progress, we finally get to the will-reading scene- forty plus minutes in.  The bulk of the estate goes to our heroine, which the others don't take well.  This scene is followed up with the family just sitting around and looking bored.  Hey, that's my job- not yours!  The whole thing just leads to more freaky scenes, including one where our heroine's sister/cousin is hanging out in her room naked and whipping her blind sister/cousin.  I wish I was making that up, but now I can't go to sleep without picturing that image!  Your legacy is now set, Jesus.  There's also a scene where our heroine wakes up from her sleep- naked, of course- and sees a giant, black dildo on the floor of her room.  Nothing happens, but I have to be worried when a film makes me think that it might!  In one of the film's few interesting moments, our heroine walks in after two of the relatives have killed off another one, playing with the corpse's disconnected-hand.  They try to hold a conversation with our heroine while one of them literally holds the body part behind their back!  That's kind of funny, but not enough.  Apparently, the dad can come back as a ghost and talk to our heroine Hamlet-style as well.  Wow, I can almost muster up the interest to care.  Sorry, I tried and failed.  Oh well. 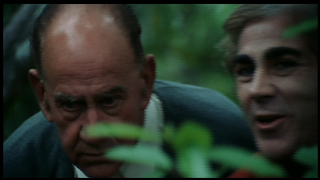 Something interesting has to happen in the final section of this movie, right?  Well.... 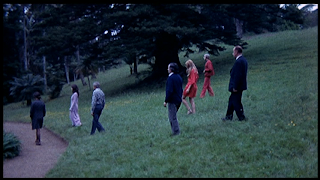 This movie....zzzzz.  Sorry, I fell asleep while thinking about the movie again.  So yeah, this movie sucks!  Like most of the Franco films I've seen- including Mansion of the Living Dead and Dracula: Prisoner of Frankenstein- the movie has almost no plot.  There's enough of it to fill out a Netflix sleeve, but that's about it.  The acting is...well, it's terrible.  Mind you, this is the dubbed version- I had no other option- so it's not the best way to compare the real performances.  That said, when I look at the acting on screen, there's no way I can think that this would be better if I spoke fluent French!  The real focus of the movie is this: boobs.  Seriously, the movie leers and gawks at more women than a frat house watching Girls Gone Wild!  Hell, one of the first shots of our heroine involves her naked in bed and the camera lingers on her breasts for nearly 20 seconds...before finally moving on...to another part of her body.  Seriously, Jesus Franco has nothing on his mind but naked women...and made a career out of it.  If he's not going to try, I won't try.  I'm done here. 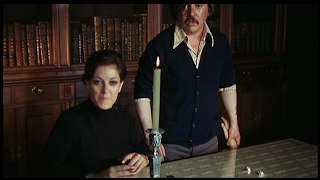 Next up, I cover a pair of '80s horror sequels that are either forgotten about or overshadowed by the stories behind the films themselves.  Will the first one be great or just a piece of ghost shit?  Stay tuned...