Tobe Hooper's Poltergeist is a film that is rightfully-praised as an '80s classic.  Hell, it's so popular that an entire Family Guy episode is based on it!  The other thing about is that the entire series is supposedly cursed.  The urban legend is based on the idea that a real human skeleton was used as a prop, thus dooming the whole cast.  Never mind that a good majority of them (including Hooper, Craig T. Nelson, JoBeth Williams and Steven Spielberg) are still alive and well.  The legend grew strong when Dominique Dunne was murdered after filming the first film and one of the cast members (Julian Beck) died during production of this film, followed by another one in the next couple of years and, finally, the young star of the series.  Yeah, that looks bad, doesn't it?  Even so, there's go to be more going on than a crazy bit of urban lore, right?  Well, yes.  I like to highlight sequels that have gotten overlooked or forgotten about & this one seems to fit the bill.  Will it match the original film or just fall flat?  Get out your Indian beads for my review of... 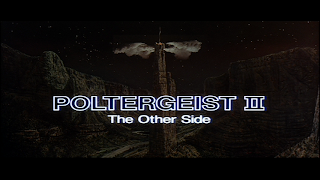 The film begins with a car driving through the desert and passing by a giant piece of rock.  We cut to a matte painting...I mean, the top of the thing and see an old, Indian approaching a fire.  He's joined by an even-older Indian man who sets up a weird, ceremonial light show.  Way to blow your budget on a complete non-sequitur, guys!  On some other day, the man shows up at the smoking crater that once was the Freeling residence.  He finds Zelda there, fulfilling her contractual obligation, and they discover a bunch of corpses under the house.  The key one is a mummified corpse that will prove to be important later.  We cut to the Freeling family in their new house, which they apparently were headed to in that opening bit.  The family is not doing well for money, since their house insurance will not pay for the damages.  In a truly silly bit, they actually claimed the actual reason for their house being destroyed!  Really?  Am I supposed to take this seriously?  As part of the new arrangement, the family is living with grandma, a nice woman who apparently has some secrets.  She gets along well with the kid, since they share a connection: they're both psychic!  Yeah, that doesn't feel forced at all.  One night, the girl gets a call on her toy phone from the grandma, who apparently just died.  Thanks for coming, actress who outlived most of the cast by a good 15 years. 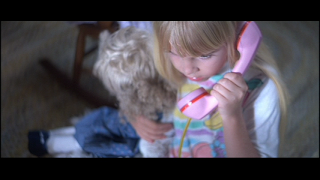 Our little heroine is having some trouble, as she sees visions and is being followed around by a creepy ghost man.  Man, I hate it when that happens.  The man (Julian Beck) is a priest who wants to spend some 'quality time' with our heroine.  You see, he's a spirit that can't pass on and needs her to lead him to the light.  You wouldn't think that this goal would not make him a villain...so he has to be pure evil all of the rest of the time.  He gives a big monologue in the rain to the dad before making his exit.  Well, that's good.  I was worried that you were going to do crazy stuff like summon ghosts and monsters to attack the family.  Oh wait, you still are!  When shit goes down (in this case, the daughter's dolls attacking her), the family decides to book it out of town!  Thankfully, the Indian man arrives at the family estate...but is not exactly greeted with open arms by the dad.  He learns to accept the man and faces the truth: they can't run away from this.  Considering that the first film was all about their house being haunted, this is kind of a cheat, don't you think?  The family learns to embrace their new helper, which is good when more shit goes down.  This time, the son's braces attack him and the other, forming a giant web of rusty metal!  How does the Indian help?  He stays back and watches the girl, of course.  Thanks for the help! 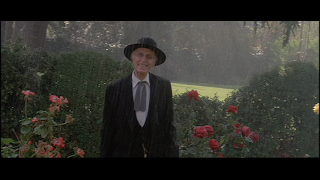 Things don't calm down for the Freeling family, no matter how much they want it to.  More ghosts and spirits appear, clearly showing where the budget went.  It's a shame that you couldn't pay Zelda Rubinstein to appear in more scenes, huh?  When Zelda finally shows up, she coerces/forces the mother to use her latent, psychic powers to learn the truth about the pastor.  His name is Kane (insert WWF joke here) and he led his followers into the cave before the 'apocalypse' came.  When it didn't, he made them stay, setting up a cave full of dead bodies.  He makes his big power play by possessing the father and forcing him to say mean things (ooh) before turning into a monster that comes out of Nelson's mouth (eww).  This change was done due to Beck's actual death, by the way.  Our heroes go back to the site of the bodies and try to bring them peace...only to have the daughter and wife be sucked into a dated-special effect.  The men follow them in, confronting a Treant-looking Kane in front of a blue screen effect.  They manage to pull their women back, using the power of a spear given to them by the Indian man.  All is well once again!  By the way, get better home insurance next time! This movie...is actually pretty good, although it does have some problems.  The plot is good, even if it takes a weird detour from Part I.  A lot of the changes are due to the thing known as 'sequel-itis.'  The movie does everything it can to one-up the original, perhaps going a bit too far.  To see more examples of that, check out Part III!  The acting is good here, although the kids never quite do all that well.  It might be 'sacrilege' to say this, but Heather O'Rourke never really sells me here.  She's not terrible by any means, but I just wasn't sold- that's all.  As far as the effects go, they are either really good or really dated.  For example, one scene involves a possessed chainsaw floating around.  This looks really fake due to the dated-digital effects and the fact that it was made for 3-D!  Damn you, third dimension!  I will say that many of them are still genuinely-freaky (the Kane monster) and some of them are actually kind of subtle.  Watch for the make-up work done on Nelson to make his face look gaunt when he's possessed.  Does the film match up to the original?  Not really.  It's still not a bad effort and it's one that should be acknowledged more often.  Don't worry- it's not part of the curse to watch it. 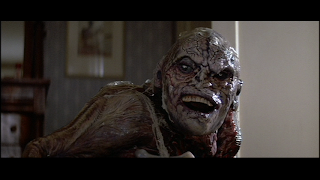 Next up, we conclude our look our look at the Poltergeist sequels with Part III.  What do you do when have of your main cast is dead or replaced?  Stay tuned...
Posted by Alec Pridgen at 11:55 PM