Chucky has never become the horror icon that he was clearly meant to be.  Don't get me wrong- he's been popular.  With five films under his tiny belt, the little guy does outrank The Wishmaster and Candyman.  Plus, he got into a wrestling feud with Rick Steiner.  No, really.  However, his 'career' has been intermittent at best. In the 1980s, he had a trilogy of films that did well enough.  After a seven year gap, the character finally got another film...and it was weird.  This led to the fifth and final (so far) film...six years later.  Not the best luck for everyone's favorite killer doll.  Suck it, Leech Woman!  So, out of all the films, why would I choose Part 3 to talk about?  Well, you see, this film was the turning point.  It was the character's last chance to make it big and hang with Jason, Michael Meyers and Freddy.  The result?  Well, there was a seven year gap between sequels, so you figure it out.  The tale jumps ahead several years, now with the child protagonist being a teenager in a military school.  At the same time, the Good Guys Factory is re-opened and the dolls are put back into production.  This brings back Chucky and his great voice for one last shot at getting a human body.  Will it work?  Get out your clippers for my review of... 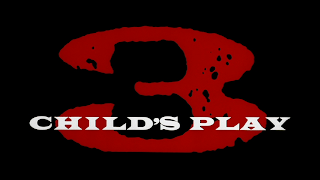 The film begins with the mostly-melted body of Chucky being thrown into the vat that makes the dolls.  After the credits, we are treated to a meeting of the executive board of the company that makes the Good Guy Dolls.  They explain the plot of the last two films to the audience.  You know, it's only been three years since the first movie- we know the gist of it.  The group agrees to re-release the dolls on the market- ruh roh.  That night, the CEO hangs out at his office- I guess the Coke Party was cancelled- and gets killed by Chucky.  This part highlights the main problem of the film- Chucky is a doll!  The thing is tiny and needs to spend about five minutes setting up minor injuries to allow him to take the full-grown man down.  After this, the doll hacks into the company's computer and finds out where the child was sent.  Really?  That's in the computer systems of the company?!?  Military school is not fun for our hero as the barber there is 'The Scorpio Killer' aka the man that invented the Trancers in the future/past.  By the way, way to cast a notable character actor is a stupid, pointless part, movie!  To make a long scene short, our hero learns that the Good Guy Doll is back on the market and, therefore, Chucky is free again. 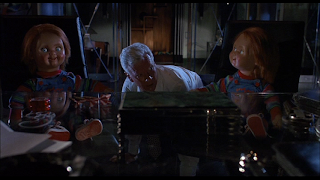 At the school, our young hero befriends a butch girl, a nerdy kid and a young, black kid.  Despite how much he looks like him, he is not the kid from Role Models!  This kid actually has about three credits (counting this), so don't expect much here.  By the way, if it turns out the kid died or something, I totally feel like a dick in advance.  Life is not easy for our hero though, since most of the people appear to be out to get him.  To make things even worse, Chucky sends himself to the school...somehow...to do the ritual to put his soul into the teen's body.  The package gets discovered by the younger kid, however, and he decides to play with it himself.  Thinking on his feet, the villainous piece of plastic decides to take this kid as a vessel instead.  His plan gets interrupted by the school's headmaster, however, making the doll bide his time.  In the B-Plot, our hero is getting the hots for the butch girl, but still has problems fitting in with military protocol.  When he sees the headmaster taking the doll to the dumpster, he freaks out a bit and gets in trouble.  Speaking of trouble. Chucky tricks the garbage collector and kills him, somehow escaping before the people arrive.  You're fast for a doll. 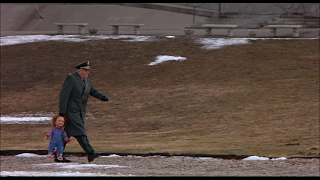 Things devolve quickly as Chucky kills the headmaster, all the while befriending the kid as part of his scheme. It only gets worse, however, as the doll gets discovered by the nerdy kid while killing Cobra's hard-ass lieutenant.  In spite of that, the 'war games' go on as the students split up into two teams.  Chucky tries to use this as a chance to get the boy, but the kid finally figures out the truth.  Note to children: dolls that sound like Brad Dourif are always evil!  The doll plays the teams against each other and, just for fun, switches their paintball ammo out with real bullets.  Hm, I don't think guns that fire paintballs can also fire bullets, but, whatever.  After the nerdy kid sacrifices himself, Chucky chases the kid to a nearby fair.  They put on fairs within walking distance of military academies, huh?  They end up in a haunted house- after Chucky kills a guy off-camera- and our remaining heroes have a shoot-out with the doll.  Yes, they have a shoot-out with a doll that contains the soul of a serial killer- why not?!?  After all is said and done, our hero kills Chucky by shooting him and making him fall into a giant fan.  Good- stay dead...for seven years. 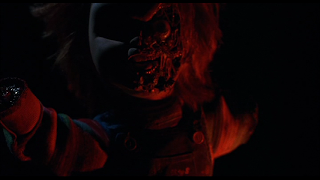 This movie is really not that good.  Don't get me wrong- it has some good moments.  The story is a bit forced, having to write-out the mother character and explain how the kid ended up where he is.  Apparently, Don Mancini was forced to work on this script before Child's Play 2  was even released.  That actually explains a lot, doesn't it?  The acting is alright, although the kid actor has the range of a shattered yard stick.  Seriously, I hope that kid just retired or something.  The real actors in the film- i.e. Andrew Robinson- do a good job, but never get enough to do.  On top of that, the movie has some plot-holes.  For one, the discovery of the barber's body would bring an end to the 'war games' scenario.  Secondly, the students are trained to check their ammo, making the 'surprise- they're bullets' reveal impossible.  Never mind trying to picture Chucky loading up their guns for them.  So much of this movie is just filler, the sign of a series trying to fish for any ideas.  This thing feels like some guy trying to scrape the remaining bits of Mayo out of a jar with a knife!  There are some good moments here and Brad Dourif makes the most of it.  As a whole though, it's a weak way to end the trilogy.  On the plus side, he doesn't have sex with Jennifer Tilly here. 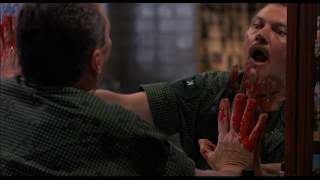 Next up, Delayed Reviews brings the second Phillippe Mora film of the month.  This one involves Christopher Walken and aliens- no, that's not redundant!  Stay tuned...
Posted by Alec Pridgen at 11:53 PM