Delayed Reviews: War-Gods of the Deep

I freaking love Vincent Price.  Say what you will about the films he appeared in- Confessions of an Opium Eater, Scream and Scream Again, etc.- he was good in almost all of them.  For those of you who don't know about how the movie studio worked back in the '50s and '60s, I'll explain why he did a lot of this happened.  They had a studio system and actors were hired to appear in a set number of films per year.  You didn't like the script- too damn bad!  This explains a lot of movies that actors like Price, Peter Cushing and Donald Pleasance made.  Now you've learned something...assuming that you didn't already know that. 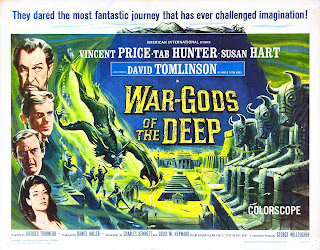 Our tale begins with a mysterious body being found on the beach.  Given the time-period in which the film was made, there's no blood or anything.  This is mysterious and all, but what does it have to do with the plot in the grand scheme of things?  Almost nothing, eh?  Well, thanks a ton!  The story proper involves a fishing village inhabited by our young 'stud' (Tab Hunter), a weird old man and a hot girl (Susan Hart).  The latter are related by blood and live in a 'way too nice to realistically be here' mansion, while the former is the beau-to-be.  He arrives to see her one night, but something befalls the household.  In a darkened room, mysterious beings grab her and kidnap the poor beauty.  That's the price of being hot- constant kidnapping and attempted molestation.  Count your blessing, most of England!  This horrific act drives our heroes to go in search of her.  Thankfully, there is some weird kelp on the wall and wet footprints to lead the way.  We wouldn't have a movie if these guys were remotely-competent, would we?  Oh and for no good reason, the old man brings his pet chicken.  No, really.  Our two and a half men find a mysterious passage that leads to a tunnel.  What lies ahead is...well, weird. 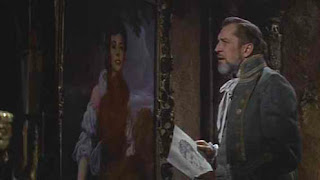 After venturing through the caves for a bit, our heroes stumble upon some people/get captured.  It's all a matter of perspective, really.  The people in the caves are led by their charismatic, colonial captain (Price).  He gives them the group's whole, silly back-story.  They were serving in the Civil War Navy when their ship crashed and they ended up in the caves.  Apparently, cave-life has a weird side-effect: immortality.  No, really.  These people are over 100 years old and they haven't aged...well, except for Price.  That's not part of the story or anything, but it's still hard to ignore.  Anyhow, we learn that the body washed up on the shore in the beginning was one of their crew that committed some sort of offense.  His punishment: being sent to the surface.  This is a punishment, you see, since the change in atmosphere causes rapid aging and, naturally, death.  Look for a similar event in a later Price film- Dr. Phibes Rises Again.  The reason they kidnapped the woman- she resembles a long-deceased love of Price's.  Man, if I kidnapped every woman who looked like an ex-girlfriend, I'd...well, be a criminal of some sort.  Despite the pleas of our heroes, he refuses to change his mind.  Adding to the pressure is the imminent destruction of some nearby volcanoes that create the steam that caused the immortality.  Ruh roh. 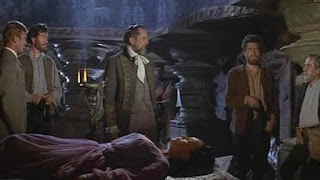 I should also mention that there are fish people here.  No, I'm not really sure why.  I'm sure that the movie tried to explain it, but I can't be bothered to remember.  After about three different escape attempts, our heroes finally get the aid of the ship's former second-in-command.  They manage to get to some underwater suits, helping the movie fulfill it's quota of underwater fight scenes.  Seriously, you don't see those enough these days.  They get to another section of caves where another action scene takes place.  For a movie that spends the middle doing nothing but exposition, they sure pack a lot in at the end.  Those fish people are still around, by the way.  They're still as unimportant as ever.  Finally, the volcano erupts, big things fall over and the heroes escape.  Don't worry- the chicken gets out too.

This movie is...weird.  Like a lot of films from this era, it was built around being based on an Edgar Allen Poe tale.  Yeah, it's not.  They try to trick you by having Price read part of the Poe story in the opening credits.  News flash: if I wanted to see Vincent Price read Edgar Allen Poe, I would watch An Evening With Edgar Allen Poe!  By the way, that movie is awesome- go see it (despite the VHS transfer)!  The whole thing is just bizarre, mixing in inexplicable immortality, fish people and volcanoes.  Who put this all together?  Did they use make Mad Libs to make a screenplay?!?  That said, there's a certain charm to watching something so random and ridiculous.  If you like the old, drive in movies, you'll have fun with this one.  If you're a neophyte to the whole thing, you'll just wander what people saw in these movies.  Yeah, I ask that sometimes too.  All things considered though, this is a pretty innocuous film.