I hate myself.  I really, really do.  How else do you explain why I would watch not one, but two movies that promise nothing but boredom?  Seriously, I must have some sort of condition.  To make sure that it's not contagious, I'm going to keep as many people as I can from watching either one of these movies.  It's a small step, but it's important to me...dammit!  The first film is Open Water 2: Adrift.  What can I say?  It's the non-sequel to a movie that was about a pair of people floating around for 90 minutes until sharks ate them.  This movie has zero sharks, zero reason to make people care and zero to offer.  It's a 90-minute film that feels about sixty-five minutes too long- that's being generous.  Much like the original film, this claims to be based on actual events.  Let's extend the same kind like of logic used by the filmmakers here to other films.  S.S. Doomtrooper is 'Based on Actual Events,' since it features Americans fighting Nazis and that really happened.  If you think I'm being too harsh, get out your bathing suit-rope for my review of... 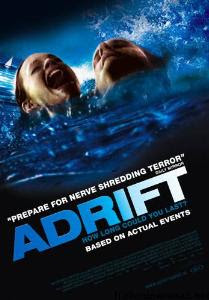 The film begins with some home movie footage of people playing at the beach.  It's shot in the style of one of those FMV videos, complete with the video being in a tiny box.  Distracting and pointless- two points!  After that bit of nothing, we meet up with our cast.  The only person I recognize: Eric Dane aka 'Hero' from Feast.  How sad.  They are all going out on Dane's yacht for his birthday, despite the fact that one of them has reservations about it.  The lead woman is afraid of the water, for reasons that we will find out later.  Here's a thought: don't go!  There would literally not be a movie without you.  She sucks it up, mostly due to pressure from her husband to go out there with their kid.  What a loving marriage, huh?  After this, the group heads out, leading to some filler with them acting like idiots and/or drinking.  About fifteen minutes in, the group is all out swimming around, save for our heroine and Mr. Dane.  He gets the 'wacky' idea to pick her up and jump in the water with her, despite her crippling phobia.  It's all fun and games until they realize the horrible truth: he forgot to hit the ladder release button.  No, really.  This yacht that must cost thousands of dollars has an electric device that sticks out a ladder, but doesn't have a rope one on the side.  I hate my life. 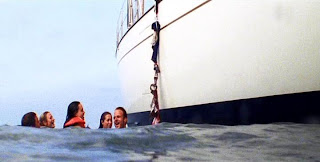 Things get worse and worse for our heroes.  They tie all their suits together to form a rope and have Dane try to climb it, only for the thing to rip.  After that, they just bitch at each other for an hour or so until most of them die- from getting too tired to swim- and Dane 'redeems himself' by hitting the switch.  Our Final Girl lives and goes to see her baby, but Dane's fate is left open to interpretation.  Tell me the next film is going to be a little better...
***************
All signs point to 'No.'  This Australian import tells the tale of a trio of people who get stuck in a situation that nobody would want to be in.  On paper, this could definitely work.  In reality, this is as dull of muddy dishwater.  You see, this movie has a cast of five people with speaking lines.  Mind you, one of them is a cameo shorter than anything Hitchcock ever pulled off and another one is in the movie for maybe ten minutes.  So I'm left with three people sitting around in a tree.  Why are they in a tree?  Well, I'll get to that in the review.  What you need to know is this.  Much like Open Water 2, this movie blows it's load very early and just sort of hangs around like the drunk guy at a party.  It's 2AM and I want this movie to get on with it's life, but it's not taking the hint!  In case you still doubt me, you'll learn.  Get out your upside down boats for my review of... 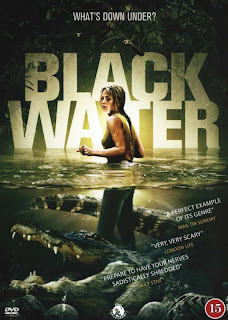 The film begins with our heroes leaving their mother's house.  Hey, remember that cameo I mentioned earlier?  Now, we're down to only four people with lines.  The trio consists of a couple that's dating and the sister of the woman.  We get a few minutes of character dialogue and setting up of the plot.  Basically, they're touring Australia and seeing the sights, including a short trip to the zoo where they see crocodiles.  Hey, I smell an obvious set-up to the plot.  They go out for a boat ride into the swamps of Australia because, yeah, people want to see that.  To make matters worse, we learn that the girlfriend is pregnant, but she hasn't told the boyfriend yet.  Yes, give me more pathos, movie!  Their guide leads them out into the...well, brown swamp full of trees before a crocodile attacks them.  Why would it attack a boat?  Um, because...that's why.  The couple manages to get up in one of the many trees, but the sister is in the water.  She struggles to get onto the overturned boat, managing to narrowly do so in time.  Hey, here's a question for you- why can't it just turn the boat back over again?  I'm just asking because there's nothing else to occupy my time for the next seventy minutes. 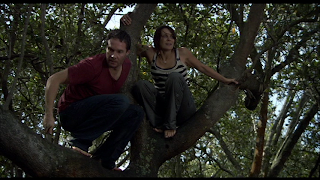 The premise is simple: the crocodile is hanging around and they can't go anywhere.  Really- that's it.  There's no mind-games by the creature, other cast members or anything else at all.  Hell, they draw out every scene just to make the movie hit 90 minutes.  A shot of someone watching the water to see an enemy approach- intense.  Seeing this shot for a good five minutes straight- boring.  The guy dies, the crocodile wounds but doesn't kill the girlfriend and the sister eventually kills the beast.  Make use of your fast-forward button, people! 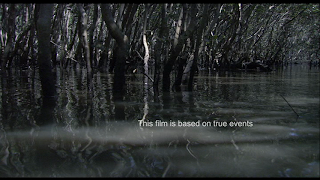 Both of these movies suck!  How do you kill two premises with such shit?!?  The first film takes the realistic 'oh shit- how do we survive this' premise of Open Water and turns into a movie about people who can't get back onto their boat!  Who green-lit this idea?!?  I seriously hate stuff like this and makes me not want to see movies for a living...if this actually paid anything.  Black Water is...a little better.  You know why?  As dull and predictable as it was, it at least had some conflict.  I wasn't forced to watch a one-act play involving naked people trying to float in the water.  On the flip side, however, it's a movie about the world's smartest and, simultaneously, the world's dumbest crocodile.  This thing is patient enough to wait around for two days to kill these people.  However, it also makes its presence known far in advance of its attack.  Apex predator, my ass!  A quick look at Wikipedia on the animals from this movie indicates that they hunt primarily at night- this one hunts during the day.  Here's another fun fact: there are one to two fatal attacks reported per year.  In this movie, there are three.  So, to summarize, a movie nerd in Florida knows more about crocodiles than actual Austrian people who make shitty direct-to-DVD horror films.  How sad.

Up next, I return to the Living Dead theme with an old-school, import film that actually pre-dates Romero's work.  Naturally, it has a severe lack of zombies in it.  Stay tuned...
Posted by Alec Pridgen at 10:53 PM