Klaus Kinski is a name known to most foreign film buffs, but not many others.  The man had a fifty year career (1948 to 1989) career, yet he's still fairly-obscure to the mainstream.  That's sad- so let me do my best to fix that.  Sure, Klaus has been dead since 1991, but it's the thought that counts!  The first film to showcase is an obscure Spanish film with a premise that sold me instantly.  It's simple: aliens in medieval times.  How has this not been done a dozen times yet?  The movie stars Klaus Kinski, Harvey Keitel and a bunch of other Spanish guys that I don't know.  Now, there is one problem to note: the whole thing is dubbed- at least in my version.  With a movie this obscure, there aren't many types of prints available, so you may be stuck with a dubbed, pan-and-scan version like I was.  Regardless, you should still check this out.  Don't believe me?  Well, read on, true believers!  Get out your fish-bowl helmets for my review of... 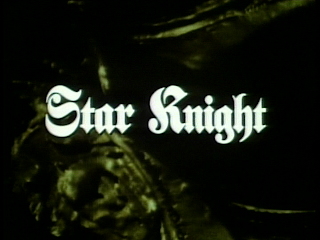 The movie begins with a bit of silly narration talking about how people were obsessed with the idea of alchemy.  That's nice, but how does it relate to, oh, anything?  In a castle, an occult priest (Kinski) prays for a sign from the Heavens and gets...a blinding light.  Thanks God- now I'm blind!  A bunch of other people see the light too, although with a less jubilant view than Klaus.  This light comes from an alien spaceship that flies by!  All of this drives the peasants crazy, as we see in a montage showing how they are freaking out and making up stories.  I guess if I had nothing to do but shovel shit all day, I might want to focus on something else too!  The job of stopping this chaos and potential uprising falls on the King's Knight Klever (Keitel).  He doesn't seem to be very successful with just talk, so there is only one solution: he must slay the dragon.  By the way, the villagers think that there is a dragon around.  All of this distracts him from his main goal of romancing the King's daughter (some Spanish actress).  The problem: she doesn't feel a damn thing for him.  On top of that, there is a conflict for the King's attention between his priest (another Spanish guy) and his 'wizard' (the aforementioned Kinski).  To get away from all of that, the Princess goes out to the nearby lake and goes for a skinny dip.  Unfortunately, this leads to her being abducted by the spaceship.  Whoops. 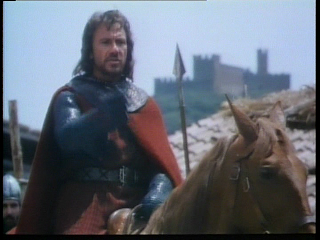 In the wake of the Princess' disappearance, the King and Klever go out to the lake- since the woman's handler saw the event- and try to find her.  The lady makes sure to blame it on 'a dragon,' since these guys just love a narrative.  As night falls, Klever and the others are floating around in boats and 'challenging the dragon.'  Finally, the ship moves about- apparently it left the lake and came back- and flies away.  They draw this out, since the movie is supposed to be a comedy.  It's all about making Klever look like an idiot, basically.  This includes having him fall out of his boat, flail around and all sorts of stuff like that.  We are also treated to a running joke here that I don't exactly get.  The first time the Princess went to the lake, she passed by a Knight who 'wasn't supposed to let anyone pass.'  She tricks her way past him, setting up the arrival of the King and his men later.  He tries the same thing with them, but he has to let them by.  All this was missing was the 'wah wah' sound effect to complete.  I hope you like this guy, because he has at least three more scenes doing the same schtick.  On the ship, we learn that the 'dragon' has an alien man as its controller.  He looks very odd in his scaly spacesuit and fish-bowl helmet.  In spite of all that, she falls in love. Eventually, the Princess convinces the alien to return her to her homeland.  The 'wizard' tracks them down- passing by the stupid Knight at the bridge again- and meets up with the alien (see above).  He forms a bond with the 'person' and decides to help the lovers out.  On the flip-side, the Priest and Klever are in the King's ear (not literally) and convince him that only the Knight can kill 'the dragon.'  If he, or anyone, does this, they will be married to the Princess and inherit half of the kingdom.  The King's men find where the ship has landed (insert Knight at bridge-again) and Klever calls him out.  Being sort-of a bitch, the Princess goads him into fighting for her honor.  Wow, good satire in this film- for once!  He actually drops her outside of the ship, making Klever happy, but her not.  However, the alien shows up on the bridge-guarding Knight's horse and challenges Klever.  The fight goes back and forth, eventually leading to Klever hitting the alien.  He hits an unseen button, however, and gets his armor switched with the alien's!  The now-nude alien lies dying (he can't breathe our air) until Klaus pours liquid gold down his throat- saving him.  Meanwhile, Klever and the priest try to kill the dragon from the inside, ultimately leading to them being launched into space.  The 'Star Knight' returns with the Princess and gets his wishes.  The End. 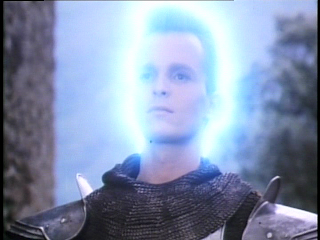 This movie...could have been a lot better.  The plot actually has a lot of promise, but falters quite a bit.  Much like Scream, it makes fun of the cliches while also doing them!  There is some good satire, but slow pacing in the middle hurts the flow of it all.  Some of the acting is pretty good, as Keitel and Klaus really nail their roles well.  The filler characters- i.e. the bridge-guarding Knight- don't do so well though.  On top of that, the DVD version is dubbed...badly and never syncs up.  On one hand, it adds a camp element.  On the other hand, it is very distracting.  The presentation is good though and there are some unique things to be seen.  In more competent hands, it could have become a real cult classic that pulls the air out of all of those 'sword and chivalry' films.  As it is, it is a very-forgotten film that doesn't get the attention that it should have.  I can't say for sure that you'll like the movie, but it sure is something that you probably have not seen before.  In an age of same-old, same old and sequels out the wazoo, I'll take that. 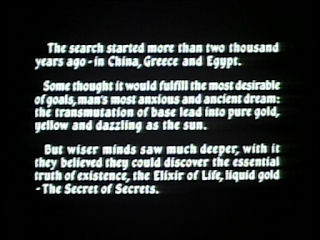 Next up, I give you a second dose of Klaus with an Italian slasher film.  What happens when the film is more obsessed with sex than plot though?  Stay tuned...