Italy is a land that never met a film idea that it couldn't rip-off.  Part of it was due to a lack of creativity in the people that ran the movie studios.  Luigi Cozzi has spoken about this, making the famous quote- "Their first question wasn't 'what is your movie like?' and was actually 'what movie is your movie like?'  Can we place all of the blame on these nameless, faceless men though?  I think so, but let's play the devil's advocate for a moment.  In 1984, Lucio Fulci made New Gladiators, a movie that simultaneously rips off both Deathrace 2000 and Deathsport.  All he needed was to work in enough swordplay to rip-off The Warrior and Sorceress and he could have gotten the hat-trick!  The film is known by many varying titles, including Rome 2072 A.D., Warriors of the Year 2072 and Rome 2033: The Future Centurions.  So, which year does it take place again?  Basically, it's the future, there's an evil corporation and death equals ratings.  Will this movie bring in something new and different?  Get out your disinti-bracelets for my review of... 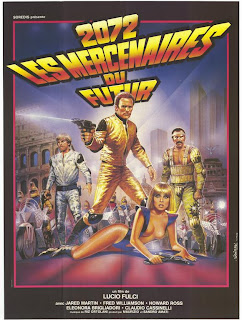 The movie begins with some long, lingering shots of some model buildings.  Actually, it begins with the Troma logo (they bought it), but I was hoping not to mention that- oops.  We learn that 'Killbike' is the most popular show on television.  It's basically a bunch of people getting killed on motorcycles.  Wow, this movie is just oozing originality and subtlety, huh?  The big star of the show is a wrongfully-convicted man who is forced to fight in the games.  I look forward to seeing this plot point again in Death Race.  A problem has arisen though: a rival network is doing better.  They have a show where people are put into virtual reality and faced with near death experiences.  If they panic, they lose.  That's...a weird idea for show, don't you think?  In order to get the ratings back up, the studio is forced to put on an even bigger show.  In one week, they are going to make a group of convicted, death-row felons fight to the death...on bikes.  Um, if the other show is not working, why will this one?  In the story's context it does, so, go figure.  The group of inmates are a rag-tag group that include a bunch of generic white guys, an Asian guy and Fred "The Hammer" Williamson.  You really couldn't put on a bad Italian film from the 1980s without him, could you? 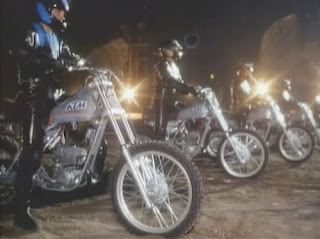 Unfortunately, this movie suffers from one serious problem: a plot.  You see, this movie is much more than a pretense to string together action sequences on bikes.  No, the plot involves intrigue, deception and robots in space.  The network head is a mysterious man you see only on a monitor.  Gee, he's definitely a hologram or anything.  On top of that, there's a strange, wounded man who has a history with our hero.  We get to see how the men are training, which consists of them standing in a room and fighting off ninjas that randomly teleport.  If you want a good laugh, watch Fred make his dramatic, fighting faces!  The only guy who ever made sillier faces while fighting was Steve James (R.I.P.)!  Oh yeah, the Japanese guy knows kung-fu too.  We get some back-story with our hero too.  Apparently, his family was killed and he was blamed for it, thus ending up here.  He has an ally in the weird, wounded man, who provides him with a device to escape from his cell.  Along with the group, he escapes to the roof through some tunnels, finding themselves face-to-face with a really obvious matte painting.  Unfortunately for them, they get captured and hung over an electrified floor.  One poor bastard (copyright pending) falls and gets shocked, but manages to live when Fred and our hero help him.  Hurray! 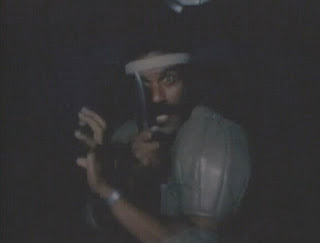 As the intrigue and plotting continues to build, I continue to not understand a damn part of it.  From what I can tell, the evil person behind the corporation has plans that will come into play after the big show.  Speaking of which, this part is actually interesting!  It starts out with a chariot-style action scene involving our heroes facing off with some other inmates.  Who are the people they're fighting?  Um, that's a good question.  During this surprisingly-decent scene, we learn the evil plans of the corporate saboteur.  No matter who wins the big fight, the bracelets on their wrists will disintegrate them.  Why?  To make the head of the network look bad and allow him to take over.  The second phase of the fight involves more bike riding and more death.  The lady scientist shows up to tell them the truth and...they just leave.  That seems easier than it should be.  In the process, they kill the lead person that was torturing them- bonus!  They make it to the control room, but the token Asian guy gets killed.  They fight their way further and kill the saboteur, only to learn that he's not the real culprit.  The actual villain is the face on the screen- whose actual body is a computer terminal in space.  The drama of this scene is ruined by the choice to have flashing strobe lights running constantly.  In the end, they kill the wounded man, learn that he's a robot and use a code from a flash drive embedded in his eye to blow up the satellite.  For no reason, Fred Williamson vanishes before the credits. 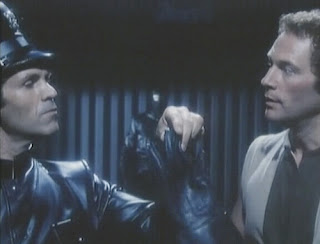 This movie is not that good.  You would think that the combination of Lucio Fulci and arena combat would be golden.  Sadly, the plot is just not up to snuff.  There's plenty of it, but it takes too long to get going and doesn't really deliver.  In addition, the budget is definitely not up to snuff.  That matte painting in the roof scene would only be more obvious if they put up a sign in front of it saying 'This is not real!'  The acting is not too bad here- that's a surprise.  The star does a good job in this underwritten role and Fred Williamson is, well, Fred Williamson.  The two big action scenes of the movie are pretty entertaining, the latter more so.  If there could have been one or two more of them, I might actually recommend the film.  Fulci felt the same way apparently, since he allegedly left once shooting was over and put zero input into the post-production phase.  It's a shame that Fulci has yet to really make a great film that I've seen.  He's got more though, so there may still be hope.  In the meantime, enjoy this melting face shot. 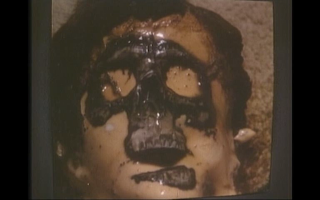 Next up, Blockbuster Trash brings you a movie that rips off Demons.  As long as this doesn't involve Haitian zombies, this might be salvageable.  Stay tuned...
Posted by Alec Pridgen at 11:57 PM