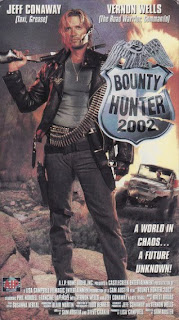 That's...just sad.  Where to start?  How about the two stars that need a film role listed under their names to establish that they're stars?  How about the generic pose?  Hell, how about the fact that their tag-line 'A Future Unknown' is obviously not true?!?

Next up, a movie that challenges every other horror series' supremacy.  Why is it named after a bad Schwarzenegger film then?  Stay tuned...
Posted by Alec Pridgen at 3:17 PM

Email ThisBlogThis!Share to TwitterShare to FacebookShare to Pinterest
Labels: vhs for the win